Typically held in Philadelphia, the week-long program (running August 20 through 26) will take place entirely online this year, as has been the case for most festivals since the beginning of the pandemic that shut down much of the country.

But even in a virtual space, BlackStar will present more than 80 films — representing over 20 countries, and including 24 world premieres — an array of live panels, and special events, bringing together some of the most innovative and impactful filmmakers, producers, and thinkers working today. Here are the ones we’re most excited to check out.

Channing Godfrey Peoples’ feature debut, which features a wonderful performance by Nicole Beharie, tells the story of a former beauty queen turned hard working single mom, preparing her rebellious teenage daughter for the Miss Juneteenth pageant, hoping to keep her from repeating the same mistakes in life that she made. It’s a film steeped in Black Texan culture, starting with its namesake holiday, which marked the day — June 19, 1865 — that slaves in Texas learned they were free, as ordered by the Emancipation Proclamation more than two years earlier. And Peoples, a native of Fort Worth, imbues the film with a Texan authenticity, undoubtedly its greatest strength.

After two police killings, Black millennial organizers challenge a Chicago administration that they believe is complicit in state violence against its Black residents. Told through the lens of two local leaders of a movement to abolish the police, “Unapologetic” is a feature documentary directed by Ashley O’Shay that takes a deep look into the Movement for Black Lives in Chicago, from the lesser known murder of Chicagoan Rekia Boyd, a 22-year-old Black woman who was fatally shot by an off-duty Chicago police officer in 2012, to the election of Lori Lightfoot; the first African-American woman to be mayor of Chicago. It’s O’Shay’s feature debut.

Tayler Montague’s debut film is the short “In Sudden Darkness,” which follows a Bronx, NYC family trying to stay afloat in the midst of the city-wide blackout of 2003. The outage impacted over 50 million people across the United States, from Ohio to the East Coast and southern Canada, and, in some cases, lasted for weeks, resulting in the deaths of nearly 100 people. Described as a slice of life film, “In Sudden Darkness” will navigate the blackout from the POV of a working-class Black family. It will screen in the “Kindred” section of the festival, which includes films that tackle “the unsettling familiarity of close relations.” It’s the first film from Montague, who has written for notable online film magazines like Film Comment, Little White Lies, and Reverse Shot.

Tanzanian American filmmaker Ekwa Msangi makes her feature film debut with “Farewell Amor,” which follows an estranged Angolan immigrant family in Brooklyn as they struggle to overcome the emotional distance between them. Father Walter is trying to let go of a previous relationship, after he is joined in the U.S. by his wife, Esther, and teen daughter, Sylvia, who are both struggling to adapt to life in a new country. Eventually, they overcome personal and political hurdles, and rediscover what they lost after being apart for a long time. The film is a universal immigrant story, and an intimate look at the kind of intergenerational conflict that has defined America from its very beginnings.

The short documentary, made in 1970 by Ghanaian filmmaker and academic Nii Kwate Owoo, was banned widely upon completion, because of what was seen as provocative subject matter at the time. The film examines the colonization of African Art in the British Museum in London. Owoo gained unprecedented access to the British Museum vaults, where he filmed stolen African artifacts hidden in the museum’s basement, and chronicled his findings in the documentary. Needless to say, the British didn’t like being exposed and went out of their way to suppress the film. It’s a riveting story that would make great fodder for a spy novel.

Shantrelle Patrice Lewis’ debut feature “Daughters Of” honors the lives and legacies of the foremothers of Black women today, showcasing their stories, struggles, and lessons. It features phenomenal women, including Tarana Burke (who started the MeToo movement), Latham Thomas (founder of Mama Glow, a holistic lifestyle hub for women to explore their creativity through well-being), author, professor, activist, and cultural critic Brittney Cooper and so many more, each unpacking and celebrating the legacies they seek to uphold. The film sets out to tell the stories of Black women whose names have been unknown and whose stories have been untold, until now.

Directed by Raishad Hardnett, Lauren M. Schneiderman, and Cassie Owens, the documentary short takes viewers inside Philadelphia ball culture to see how the community perseveres in the face of adversity. It’s an inside look into the effort to preserve Philadelphia’s ballroom scene, a Black and Latinx LGBTQ safe-space that has endured for 30 years. The documentary goes over this history, featuring major players like Alvernian Prestige, who organizes the Dorian Corey Awards Ball — the largest annual ball in the city, organized in honor of Dorian Corey, a trans woman, drag performer, and fashion designer who appeared in Jennie Livingston’s landmark 1990 documentary “Paris Is Burning”) — and operates as a de facto historian for locals.

A feature documentary from director Shalini Kantayya, the film explores the fallout of MIT Media Lab researcher Joy Buolamwini’s startling discovery that facial recognition does not see dark-skinned faces accurately, and her subsequent journey to push for the first-ever U.S. legislation to govern against bias in artificial intelligence. A self-described science fanatic, Kantayya directed the season finale episode for the National Geographic television series “Breakthrough,” a series profiling trailblazing scientists transforming the future, executive produced by Ron Howard, and her debut feature film “Catching the Sun,” about the race for a clean energy future.

Michèle Stephenson’s feature documentary reveals the depths of racial hatred and institutionalized oppression that divide Haiti and the Dominican Republic, two nations that share the island of Hispaniola. Tensions between both countries is many decades old, and shows no signs of improving. Repeatedly struck by natural disasters and shaken by political instability, Haitians have looked for work in the economically healthier Dominican Republic, where they have long suffered abuses. In recent years, thousands have been pressured to leave voluntarily or have been forcibly deported. “Stateless” incorporates hidden-camera footage to trace the history and present-day politics that have nurtured an environment that allows state-sanctioned racism to thrive.

A feature documentary from Mexican-American filmmaker Dario Guerrero, the film profiles an undocumented mother of three who, after a sudden cancer diagnosis, is forced to choose between seeking treatment in her native Mexico, and risk not being able to return to America, or awaiting certain death in the U.S. Her son takes a leave of absence from college to come home and take care of her, and their fight against the disease leads them into the world of alternative medicine, where they find hope at a clinic across the border. The catch: it might mean giving up everything they’ve worked so hard for. The film weaves footage from over a 25-year period, to tell the heartfelt story of a mother’s love and pursuit of the so-called American Dream.

BlackStar membership.” data-reactid=”54″>Each panel is free and open to the public. Ticket options to stream the films include an individual $5 “Day Pass” which provides access to all content streaming on that particular day and only that day. And a $100 “All Access” pass which provides access to all festival events. Additional perks include: admission to BlackStar Pitch Session, where a selection of filmmakers of color propose their works-in-progress to a panel of funders, distributors and producers; and an annual BlackStar membership.

Founded by Maori Karmael Holmes, who serves as artistic director and CEO of the festival has already accrued sizable support from across the country, from a prestigious list of financial backers that includes the John S. and James L. Knight Foundation and the John D. and Catherine T. MacArthur Foundation, as well as industry heavyweights such as HBO, CAA, and Comcast/Xfinity, and individual donors and partners, such as Lionsgate/Starz.

It’s clear that the festival is providing an invaluable service, not only to the city of Philadelphia, but for filmmakers of color around the world.

Thu Aug 20 , 2020
After Brett Phillips lined out to right to end the game, Bauer unbuttoned his jersey to reveal a T-shirt depicting him amid a low point in his career, a meltdown during his previous visit to Kauffman Stadium last July. Bauer threw the ball over the center field wall as Cleveland […] 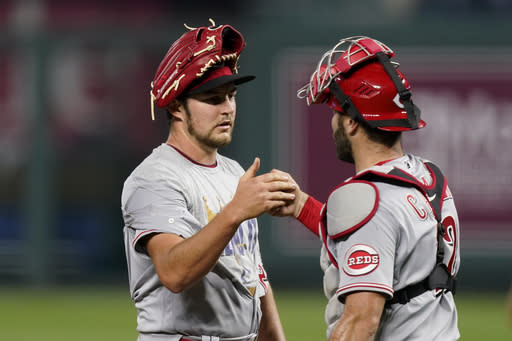