Florida, ravaged by a historic spike in COVID-19 cases for weeks, is showing signs of progress in statistics such as hospitalizations and positivity rates according to its governor — but stories of the human toll of the virus on young and old in the state continue to emerge this week.

In one case, a 21-year-old who believed he had recovered from a mild case suddenly became gravely ill with multi-organ failure. He’s now sharing his story as a warning of the potential for long-term illness.

And in a heartbreaking story, a 90-year-old man likely caught the virus as he said his final goodbye to his dying wife. After his story gained international attention, he also tested positive and later died. His family says he had no regrets.

Those stories come even as other areas of the country have gone months without serious outbreaks. In South Dakota, low case counts have left the governor supporting the Sturgis Motorcycle Rally, an event that is set to attract 250,000 people over the next 10 days, even as experts warn a spike in cases could overwhelm the rural health care system.

📰 What we’re reading: Ohio Gov. Mike DeWine tested positive, then negative for COVID-19. That underscores how not all tests work the same way, nor do they always provide identical results. Even the same test taken twice can show contradictory outcomes. Here’s answers to common questions on the subject.

The federal government has allocated more than $9 billion to develop and manufacture candidate vaccines, and more than $2.5 billion more has been earmarked for vials to store the vaccines, syringes to deliver them, and on efforts to ramp up manufacturing and capacity.

The largest sums have gone to pharmaceutical giants Pfizer, AstraZeneca, and a collaboration between Sanofi and GSK, as well as biotech firms Moderna and Novavax – all of which have candidate vaccines being tested in people.

To save time, the companies have been running trials simultaneously that they usually run in sequence. Moderna, for instance, hasn’t yet published its Phase 2 trial results, but is already in larger-scale Phase 3 trials, beginning tests last week of its candidate vaccine in 15,000 volunteers. Phase 3 trials started this summer are expected to return results this fall, with the timing depending on how quickly they can find volunteers.

If any of these approaches prove safe and effective, it could transform vaccine development worldwide, allowing faster attack strategies against dangerous viruses that may emerge in the future, as well as those that mutate rapidly, like the flu.

21-year-old recovers from mild case, then his organs fail

A 21-year-old from Florida is warning of potential long-term virus complications after his mild case turned nearly fatal. Two weeks after Spencer Rollyson tested negative and returned to work, he started suffering from an array of symptoms. His fever eventually reached 103.4 degrees — and Rollyson fell unconscious in the middle of a June 15 telehealth appointment.

Doctors diagnosed Rollyson with multi-organ failure with heart failure, acute respiratory failure, and severe sepsis with septic shock. “I thought I was going to die. I was literally sitting in the hospital like, ‘I’m going to die,’ ” Rollyson recalled.

It’s yet another puzzling example of how the virus can damage the body in unpredictable ways. For example, two German studies published last week found heart abnormalities in COVID-19 patients months after they had recovered from the disease

No masks required as 250,000 expected at Sturgis bike rally

One of the largest events since the beginning of the pandemic has begun in South Dakota: More than 250,000 people are expected at the iconic Sturgis Motorcycle Rally. That’s scaled down from previous years, where about half a million people have descended on the city of about 7,000 for an event that has developed a reputation as an anything-goes festival.

While the 80-year tradition isn’t as raucous as it once was, festivalgoers will be largely free of social distancing restrictions common elsewhere in the country during this year’s 10-day festival. Masks are encouraged, but not required.

More than half of Americans fear job losses

About 54% of Americans fear they may lose their job due to the coronavirus outbreak, Harris Poll data shows. Overall, nearly half expect their personal finances to be generally worse off in the coming months.

“There are two economies in the pandemic,” Gerzema said. “In general, older, wealthy Americans who are white are typically more confident that they’ll prosper. But the ones really feeling the pain are younger, lower income Americans and minorities.”

The labor-market recovery has reached a critical juncture, economists say, with millions of workers at risk of prolonged unemployment just as emergency unemployment benefits expire.

President Donald Trump said Friday he was preparing to act unilaterally on four programs, including several that Americans have been relying on to keep financially stable since the coronavirus began pummeling the U.S. economy in March, but said his administration was still working with the hopes of reaching a deal with Democrats.

The legality of such orders remain unclear and the president has largely skirted questions about the constitutionality of using executive orders on such programs.

“My administration continues to work in good faith to reach an agreement with Democrats in Congress,” the president said. “Yet tragically Nancy Pelosi and Chuck Schumer continue to insist on radical left wing policies.”

The Crow Tribe in Montana has ordered its members to lock down for two weeks as tribal leaders moved to slow a sharp spike in coronavirus cases and deaths on yet another reservation in the country.

Native Americans have been disproportionately affected by COVID-19 across the country, with major outbreaks from Arizona to South Dakota triggering similar lockdowns. The Navajo Nation that covers parts of Arizona, New Mexico and Utah has tallied 468 confirmed deaths from the virus and has ordered another lockdown this weekend. In Montana, Native Americans make up 7% of residents but have seen 15% of confirmed virus cases and 36% of deaths as of July 26, the state says.

Crow Tribe Chairman Alvin Not Afraid said the lockdown, which began Friday, is necessary because a stay-at-home order in effect since mid-March has been ineffective.

Big Horn County, where the 3,500-square-mile reservation is located, is on pace to record more confirmed virus cases in August than the previous two months combined. The county reported 85 new cases during the first week of August, compared to 249 in July and 44 in June. Seven of its 12 confirmed virus deaths have been recorded in the past 10 days. The figures include cases on the reservation but the tribe doesn’t publicly release case counts.

The second report examined cases of a rare virus-associated syndrome in kids. It found that nearly three-quarters of the children with the syndrome were either Hispanic or Black, well above their representation in the general population.

As with adults, many of the hospitalized children had existing health problems, including obesity, chronic lung conditions and — in the case of infants — preterm birth.

A Georgia high school dropped its five-day suspension for at least one student who posted a photo of crowded hallways showing students without face masks.

Hannah Watters, 15, tweeted Friday that she was no longer suspended from North Paulding High School in Dallas, Georgia. She told the Associated Press that her principal called her mother, apologized, and completely removed her punishment, leaving her surprised and “very grateful.”

The 30,000-student suburban Atlanta school district resumed classes Monday with 70% of students returning for in-person instruction five days a week. It received national attention this week when the images of the crowded hallways showed students in clusters without face coverings. She said that she was then suspended for five days for violating rules on students posting school images on social media. BuzzFeed News reported that a second, unnamed, student was also suspended.

Gov. Andrew Cuomo announced Friday that New York schools will be able to open for in-person instruction this fall, leaving the ultimate decision on reopening up to local authorities.

Cuomo said the infection rates due to COVID-19 are low enough so the districts can begin to reopen next month. Friday’s decision is meant to be a preliminary one, as the first day of school is still a month away. Each district had to submit their own plans to reopen that are being reviewed by the state Health Department.

The nation’s largest school district, New York City, is expected to start classes Sept. 10. The district plans to allow students to choose either online learning or a hybrid plan with as many as three days of in-person instruction.

The U.S. added 1.8 million jobs in July as payroll growth slowed amid a split-screen economy that had employers stepping up hiring in parts of the country that continued to let businesses reopen, even as COVID-19 spikes forced Sunbelt firms to pull back and lay off workers.

The unemployment rate fell to 10.2% from 11.1% in June, the Labor Department said Friday. Economists surveyed by Bloomberg had estimated that 1.5 million jobs were added last month.

'If I Had Known The Risks Before Getting Breast Implants, I 100-Percent Would Have Said No'

Sat Aug 8 , 2020
Photo credit: jade4fitness – Instagram From Women’s Health Something weird was going on with Laura Miranda’s left breast; the shape was changing. Two days prior to her noticing that something looked off, she’d had her first mammogram (breast cancer runs in her family, so she’s vigilant about getting the necessary […] 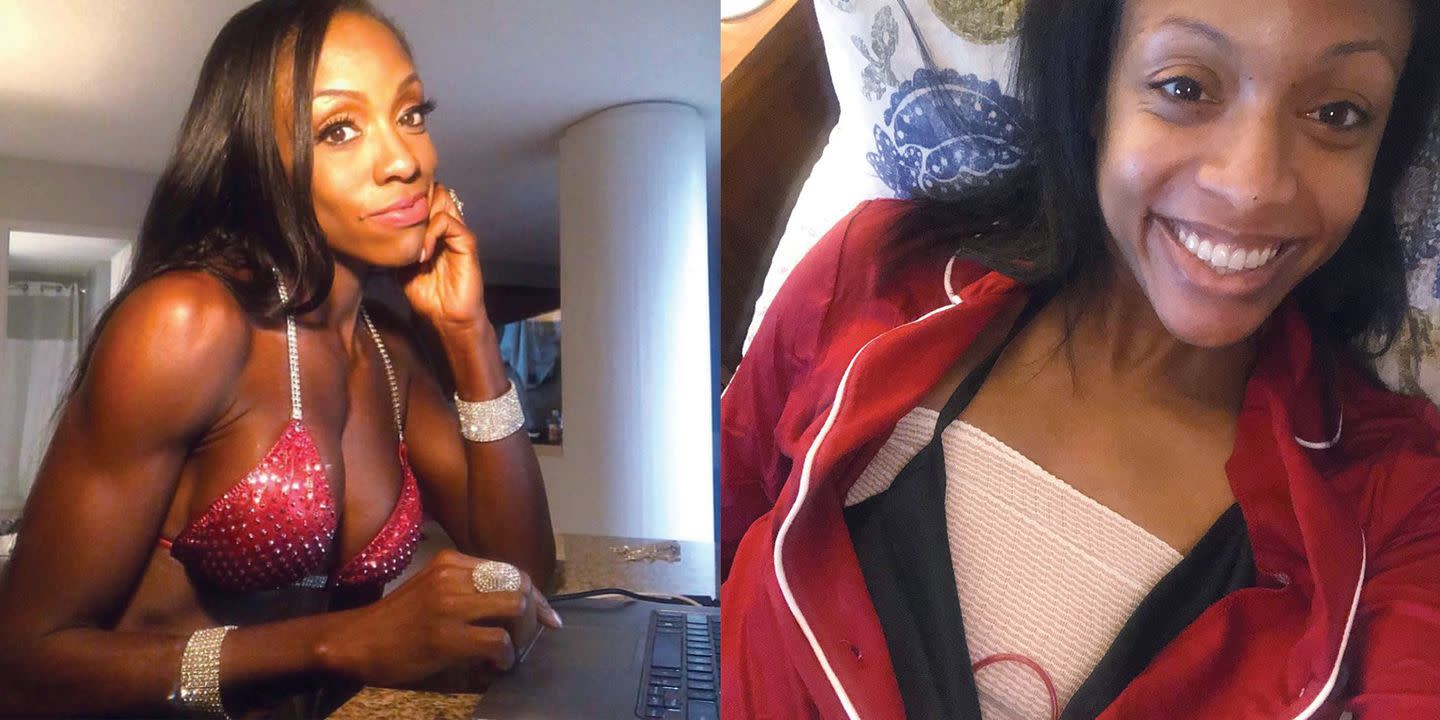