The first time lifestyle journalist Karen LeBlanc was shown a “Karen” meme centered on the coronavirus, she freaked out a little.

LeBlanc, who’s the host of GenXtra, a lifestyle show for Generation X, said her 15-year-old showed her a collage of white women, all sporting Kate Gosselin’s now-iconic reverse mullet and self-righteous smirks.

“The Karenovirus is responsible for 3 managers being fired this month alone,” the caption read.

In the earliest incarnation of the Karen memes, a Karen (or a Stacey or Becky) was a pushy, coupon-loving, entitled, middle-class white woman who, in the face of even the slightest inconvenience at a store or restaurant, would very much like to speak to the manager.

But as LeBlanc learned, today’s Karens contain multitudes: Now, Karen has a decidedly conservative political viewpoint. She distrusts science (and Dr. Anthony Fauci) and won’t wear a mask in public. Worse, she weaponizes her whiteness by calling the police if she encounters anyone who looks like they don’t belong in her neighborhood.

“I thought, ‘Wow, my name not only symbolizes a social pariah, it’s associated with the pandemic,’” LeBlanc said. “Now I overcompensate in social situations, as if apologizing for all the kind Karens out there who don’t deserve to be socially skewered.”

Karens in the news recently include New Yorker Amy Cooper, who feigned hysterics and called the police on a Black bird-watcher in Central Park, and Lisa Alexander, a San Francisco resident, who, along with her husband, called the police on a Filipino man after spotting him stenciling “Black Lives Matter” in chalk on his own property.

A white couple call the police on me, a person of color, for stencilling a #BLM chalk message on my own front retaining wall. “Karen” lies and says she knows that I don’t live in my own house, because she knows the person who lives here. #blacklivesmatter pic.twitter.com/rOpHvKVwgP

As Aja Romano reported for Vox recently, in these racially charged, hyper-polarized times, Karen has become a kind of “social boogeyman.”

“Karen is no longer content to speak to the manager. Now she’s calling the cops on her Black neighbors,” the article notes.

On Karens Going Wild, an Instagram account that has over 723,000 followers, there are Karens triggered by “Black Lives Matter” signs, Karens having meltdowns over a “face mask required” policy at a pizza place, Karens demanding to see permits from fruit stand vendors in their neighborhoods. (There are plenty of Kens and Kevins documented on the account, too.)

Clearly, the name has taken on a life of its own, but the majority of people named Karen whom we spoke with recently say they’re taking the trend in stride. (They certainly don’t view it as an “ethnic slur,” as a very-bent-out-of-shape Tucker Carlson recently said he does.)

“If the Karen meme makes people laugh, I consider that my public service,” LeBlanc said. “If the meme calls out ugly behavior, intolerance and entitlement then I say good!”

Still, LeBlanc and other women named Karen want nothing to do with the antics of viral Karens. But instead of telling you that, we’ll let these Karens speak for themselves.

Here’s what they told us.

Can we call them Susan instead of Karen?

“I’m a Black woman named Karen. The first time I saw a Karen meme I was on Twitter. I laughed it off and replied back asking if we can call them Susan instead of Karen. Some have suggested that the meme might allow people to point the finger at anyone but themselves when it comes to prejudice or our handling of the coronavirus. As I see it, it’s not so much as pointing the finger at someone to deflect the attention or blame from the other person but more of showing the world that there are some people who are doing things that should be seen. If you’re being a ‘Karen,’ you’re using privilege, you’re basically not being a great person and in this day and age, that needs to be seen.” ― Karen Fairley, an administrative assistant in Mississippi

Karen is a cultural signifier of the middle-aged ‘mean girl’

“If I could play armchair psychologist, I would say that Karen is a cultural signifier of the middle-aged ‘mean girl’ who’s condescending and self-important, unlike the high school mean girl, who is cliquey and a social striver. I suspect the Karen meme carries a complex, a chip on her shoulder that stems from existing on the fringes of high school popularity, excluded by the mean girl social order. Today, it’s payback. Karen meme is channeling that pent-up resentment at anyone who crosses her path.

What is unfortunate for this Karen is that I don’t have a Kate Gosselin haircut and I don’t spend my energy trying to get managers fired or yell at people who took my parking spot or skipped the line. Now I have to Karensplain myself and overcompensate in my public behavior just to disprove that all Karens are alike.” ― LeBlanc

I’m not slighted by a name

“My feelings about my name haven’t changed. I know who I am and who I am not. People are going to be people and everybody seems to be on their last nerve with this pandemic. Our lives have been disrupted, our patterns, and often our sense of security. I take none of that personally. I’m much more interested in the fascism happening in Portland, Oregon, then being slighted by a name.” ― Karen Banfield, a performing artist who also does intuitive readings in Ojai, California

Debating someone, especially on social media, instantly turns into an ‘OK Karen’ type of thing

“I always thought my name was boring so I’m having a little fun with being a Karen. I take it lightly, especially since I know I’m a pretty reasonable person and with the last name of Santiago, I hardly fit the privileged white woman profile. I’m part Hispanic, have dark curly hair and olive skin so I guess I felt removed from the negative connotation, which is probably why I could laugh at it. I don’t know if I would feel the same if I were a nice white woman named Karen. It does get a little annoying simply because any time you might want to debate something or get your point across ― especially on social media ― it instantly turns into an ‘OK Karen’ type thing.’”  ― Karen Santiago, a photographer in New York City

“There are some great Karens in history: There’s Karen K. Narasaki, an American civil rights leader and human rights activist who most recently served as a commissioner on the United States Commission on Civil Rights for then-President Barack Obama. There’s Karen Carpenter, who brought us ‘Close to You.’ Karen Briggs is one of the best violinists of all time. Karen LuJean Nyberg was a NASA astronaut! As for this Karen, I’m a card-carrying liberal idealist who fights for injustice and despises #45.

So in light of all that, am I bummed that my name is now associated instead with an entitled or demanding white woman who uses her privilege to demand getting her own way? Hell yes! So please, just call me ‘Pikey.’” ― Karen Pike, a photographer in Vermont

My daughter’s friend told me, ‘Wow, you’re really nice for a Karen’

“Sigh. Felicia, Becky, and I need to go out for drinks. For me, I can’t help but find overtones of sexism and ageism in Karen. Is she obnoxious? Sure. Have we all seen white women of means acting badly? Absolutely, and it’s not OK. But what bugs me is that she is a grown woman of a certain age, and going back to, uh, I don’t know, the Salem witch trials and probably even before that, this is a segment of the population that has always been scrutinized, shamed and silenced. Make no mistake: Acts of racism are 100% wrong. But it’s not just middle-aged white women who are perpetrating them, and yet with Karen they are getting more than their share of the blame. I saw an attempt to call out Kevins for guys of a certain socioeconomic sector who are racist or socially intolerant, and it just hasn’t stuck.

Obviously, I don’t plan on changing my name or anything, but my friend’s daughter, aged 12, recently looked at me and said, ‘Wow, you’re really nice for a Karen.’ I simultaneously was flattered and wanted to strangle her. Thank you, internet, for dragging my name through the mud!” ― Karen Solomon, a writer in San Francisco

“If anything, the first thing I would get judged by would be my race ― I’m Asian ― then my name Karen. I still like my name, though. I mean, Karen is just a name and anyone can be a Karen anyway. I remember the Karen meme from ‘Mean Girls,’ then it became the anti-vaxxer mom who always wants to speak with the manager when things don’t go their way. Those memes were fun to see because of how out of touch from reality they are. The Karens we see today need to be called out and they need to know they are not above anyone else. But I’m in Sweden; good thing Karen is pronounced differently here! Haha. I usually hear people call me Karin instead. I also remember someone told me I don’t look like a Karen, which I had no idea what it meant before.” — Karen Roldan, a travel and lifestyle writer in Stockholm

I roll my eyes at people who claim things like, ‘Karen is a slur’

“I have always liked my name and I still do. I’m not going to lie, sometimes I wish that the discourse could move on to a different name now, but then again, it’s important to discuss how racism and entitlement manifest specifically in white women, and Karen has become a shorthand for that.

The Karen discourse doesn’t affect me in any real way in my life. It’s limited to memes and articles I see online; nobody discriminates against me because of my name. Karen memes are about punching up, about calling out privilege. So I roll my eyes at people who claim things like, ‘Karen is a slur.’ Being a Karen really is a state of mind, and having the name Karen is a good reminder to check on those entitled, speak-to-the-manager tendencies. Even as Karen, you don’t have to be a Karen!” ― Karen Schwane, a software developer in Oslo, Norway

Will I have to be an incognito Karen during trips to New York?

“Sheena, Shona, Fiona … along with Karen and Pamela, these were the baby girl names of choice for working-class parents like mine in 1960s Scotland. Maybe it’s because of the cultural difference; in the U.K., ‘Karen’ is not a signifier of middle-class self-importance by a country mile. The meme isn’t quite as well-known, doesn’t quite have the bruising sucker punch to it as it does in America. And that’s a huge relief to me, as a liberally minded, empathic children’s author with black family members and BAME friends. That said, I’m eyeing up 2021 for the postponed New York trip I had planned. Will I have to be an incognito Karen when we land stateside? Maybe I’ll get my husband and kid to refer to me as Ms. McCombie for the duration of the vacation.” ― Karen McCombie, a children’s book author who lives in London

Mon Aug 3 , 2020
The angel came to Roy Den Hollander on a warm evening in Moscow in July 1999. He was in a bar, according to his autobiography, and slightly drunk when she appeared like a vision: “There she stood – blond, a few inches taller than me, blue-gray eyes – stunningly beautiful and with an […] 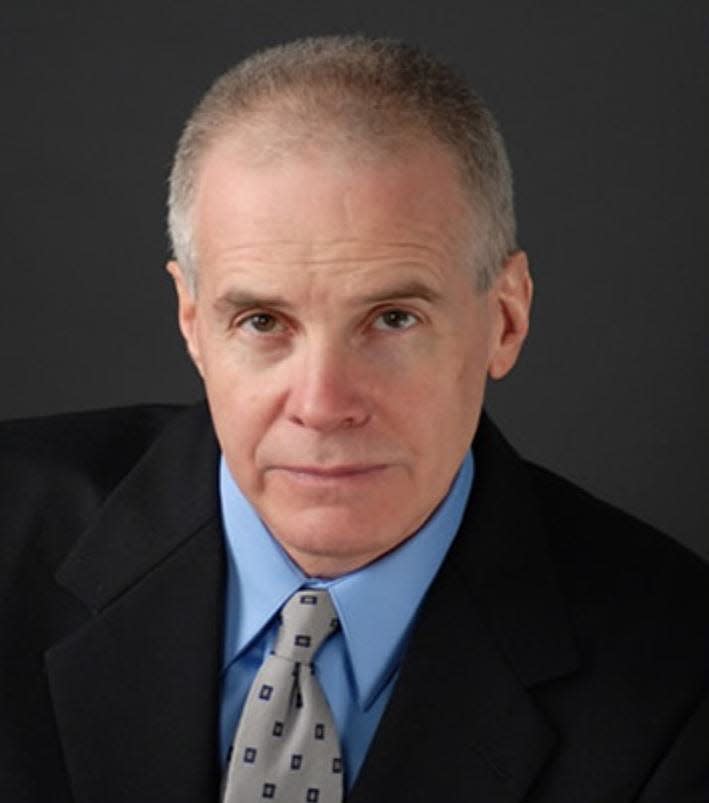