UPPER WEST SIDE, NY — When Mayor Bill de Blasio shut down all New York City restaurants in March except for takeout and delivery due to the coronavirus crisis, Luca Di Pietro had to make an excruciating decision.

With income all but gone, he had to lay off 95 of his 102 employees across his five Italian restaurants.

The loss of staff meant he had to close four locations and say goodbye for now to dozens of loyal employees.

Tarallucci e Vino, located on 83rd Street and Columbus Avenue on the Upper West Side, was his lone outpost to remain open — and uncertainty clouded the future of the business that he had spent nearly a decade creating.

“It was really, really difficult. We all went into survival mode,” Di Pietro told Patch.

But little did he know the turmoil of owning restaurants in the epicenter of a global pandemic would inspire the creation of a family enterprise that would reach far beyond the confines of his five eateries and become a force for good across the city.

Two days after de Blasio ordered restaurants to shut down, Luca’s wife, Kate Felsen, got a call from a friend outside the city asking if she could order 40 dinners from Tarallucci and have them delivered to the emergency room staff at NYU Langone.

At the time, it was one small gesture from one person who wanted to do something — anything — to help the tireless, front-line health care workers who were committed to beating back the spreading COVID-19 virus.

But from that order grew an idea.

Di Pietro called his daughter Isabella, a senior at Harvard University, on the way home to let her know what was going on.

Eighteen hours later, after a sleepless night by Isabella and some of her school friends, a website was born called Feed the Frontlines NYC, a platform that allows people to make contributions to fund food deliveries to front-line workers across New York City.

As of Thursday, the organization has delivered an astonishing 130,285 high-quality meals from restaurants all over New York City to front-line workers and homeless shelters and raised over $1.7 million.

Additionally, the added work has allowed over 100 restaurant employees go back to work, including many of Luca’s staff.

The more than 130,000 delivered meals would never have been possible without all four members of the Di Pietro/Felsen family doing their part.

While Luca was the driving force at the beginning of organization, Isabella now oversees “90 percent” of the day-to-day operations, as he has turned his attention back to reopening his four previously shuttered Manhattan restaurants.

Upon Isabella’s return to New York City from her senior year at Harvard, she was taking online classes while also playing a leading role in Feed the Frontlines, but it “became a real struggle to do both.”

“I was sitting and listening to lectures on Hagel and Marx, a class that I loved when I was on campus; but given my new context of being in New York and doing this work every day just felt so much more important in this moment,” Isabella said.

“Why split my time being a student when I could be devoting all my time and energy to a cause that felt so important?” she said. “So I decided to take a leave of absence, and I haven’t really looked back.”

The familial work on Feed the Frontlines does not stop with Luca and Isabella.

Kate, a former Emmy-winning journalist with ABC News, plays a pivotal role in setting up partnerships with restaurants and foundations. The fourth member of the family, Ian, a freshman at Williams College, tracks the numbers on purchases and meals delivered, while also working a summer internship in the city.

Luca is quick to acknowledge the special familial nature of the operation.

“If there is a silver lining on the pandemic, if there is one, it is the fact that I was able to get Isabella and Ian with us during this time,” he said. “I don’t think many parents could say that they are able to spend so much time with their grown children and have it be doing something so important for my business and for the community.”

Working with family has other perks outside the feelings of pride, with dinner meals spent hashing out ideas at the table and not having to conform to “many boundaries” when communicating with each other.

And they promise they never ever fight …

The family operation has had to evolve in its work since the peak of the crisis taking place in New York City hospitals in March and April.

Feed the Frontlines started to hear from emergency rooms it had been working with that the day-to-day rush was slowing down as coronavirus case numbers diminished. But at the same time, the organization started to explore a different avenue of food insecurity.

“We started being connected to different people in the city who are advocates for folks who lived in supported housing residents and shelters about the new challenges of getting food,” Isabella told Patch. “We decided to really shift most of the work to people in need, the shelters and supported housings that were serving people who have been most vulnerable in the city for a long time, and particularly now as the virus poses a threat to them.”

“A lot of the programs that have been in place or that have been stood up are sometimes falling short of the mark, and there are a lot of gaps, so we’ve been trying to fill those gaps,” she added.

The organization has become a citywide operation, but the Di Pietros — residents of the Upper West Side for more than 25 years — are quick to acknowledge that it started, and was first supported by their local neighborhood.

According to the Di Pietros, important connections for the organization were created during chance encounters walking their family dog, Stella, in Riverside Park, or from teammates of Luca’s beloved Geezer FC soccer team that meets in the same park to play.

You can donate funds to provide a meal for either front-line workers or families and individuals in need on the Feed the Frontlines website.

This article originally appeared on the Upper West Side Patch 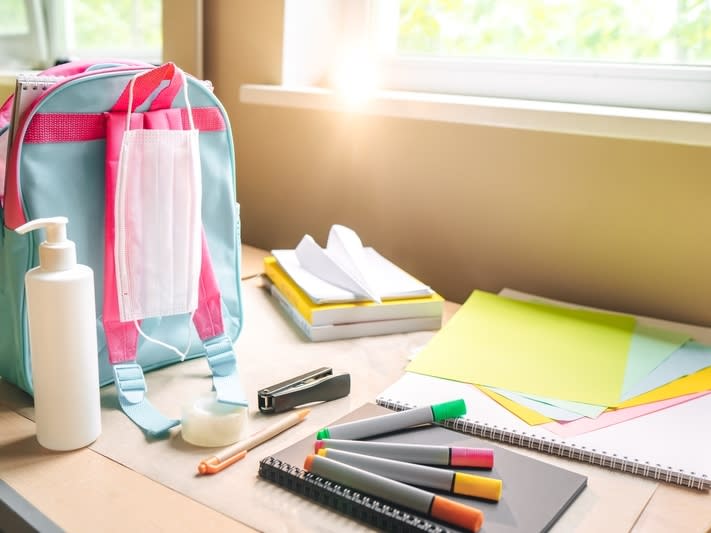