At a time when some Americans are concerned about the safety of a COVID-19 vaccine, tens of thousands have already volunteered to help bring one into existence.

As of last week, more than 107,000 people had signed up to take part in testing.

“That’s why we’re optimistic that we’re going to be able to get the trials enrolled in an expeditious way. I think we can do what we need to do,” said Dr. Anthony Fauci, director of the National Institute of Allergy and Infectious Diseases.

The milestone was reached just a week after the National Institutes of Health launched a clinical trial network for vaccines and other prevention tools to fight the pandemic.

More are still needed, but the initial surge will go a long way toward filling the requirement for at least 30,000 volunteers each for the four companies that plan to launch Phase 3 clinical trials of their potential vaccines by early fall.

Together, the Moderna, Pfizer BioNTech, AstraZeneca and Inovio trials will require at least 120,000 volunteers.

“I would say it’s very encouraging at this stage to have 107,000 volunteers,” said Barry Bloom, an immunologist and vaccine expert who is a professor of public health at the Harvard Chan School of Public Health.

‘No one is safe until everyone is safe’: Vaccine nationalism threatens global coronavirus effort

Regulation: FDA says a coronavirus vaccine would have to be at least 50% effective to be approved

Hundreds of clinical trials for drugs, medical devices and vaccines are going on across the United States at any one time, but most are relatively small. Putting together four large trials at the same time, with even more planned to come online later in the fall and winter, is a massive undertaking.

It doesn’t just require volunteers but also a robust complement of clinics, hospitals and medical centers around the nation with staff and physicians experienced in running clinical trials.

To make that happen, the NIH launched the COVID-19 Prevention Trials Network, merging four existing clinical trial networks. It launched on July 8 with a website where volunteers can sign up.

The network builds on decades worth of work creating clinical trial networks that goes back to the AIDS epidemic in the late 1980s, Fauci said.

“It would take literally years to build up a network that I’ve build up over the last 30 years. So why do it? We’re going to use what we have,” he said.

People chosen to take part will be racially, ethnically and geographically diverse. In its guidance for companies testing possible vaccines, the Food and Drug Administration says it wants the vaccine candidates to be tested in populations most affected by COVID-19, including ethnic and racial minorities, pregnant women, the elderly and people with underlying medical conditions that can worsen COVID-19.

While the effort is coming together quickly, the process is following the same strict protocols required of all vaccine developers.

“The guidelines for these trials are really clear. They will be scientifically rigorous and there are no shortcuts,” Bloom said.

Phase 3 clinical trials come only after months of other tests that first begin in cells and then moves on to animals. Only if all goes well with animal tests does the process move to humans.

In Phase 1 trials, the goal is to determine any immediate adverse effects. This is done through tests in a small number of healthy people, generally fewer than 100. For example, for the Phase 1 trial of the Moderna vaccine candidate, 45 people took part.

Phase 2 trials expand the safety testing and look at dosing – how high a dose can be given before there are adverse effects? Typically several dose levels are tested. In addition, these trials look to see if the vaccine causes an immune response in the subject. They can end up including several hundred people and expand to include older subjects.

Phase 3 trials begin when it’s clear the vaccine doesn’t cause immediate adverse effects and appears to provoke an immune response. The goal is to see if the vaccine actually protects the subjects against getting COVID-19 or, if they do get it, causes the illness to be less severe.

These will be large trials.

“Each vaccine needs to be tested on about 30,000 volunteers,” Dr. Francis Collins, director of the NIH, said in June. “We don’t believe that we have enough power in the analysis to be able to document the vaccine works unless you get to roughly that number.”

Half the participants will get the vaccine candidate, the other half will get a placebo.

“A lot of people drop out right there. They say, ‘No, I don’t want it if I don’t get the vaccine,’” said Dr. Robert Hiatt, a professor of epidemiology at the University of California-San Francisco, who has led multiple large clinical trials.

Part of the work of the clinical trial workers is overcoming such hesitation. People in the control group, the ones who don’t actually get the vaccine, are vital to understanding if the real vaccine works, Hiatt said.

“Without them you can’t proceed,” he said.

Researchers take care that participates understand what they’re signing up for. First there is an initial intake interview, which might be done over the phone or online. Those who are chosen must go through a thorough consent process.

The informed consent agreement can run 50 to 100 pages, said Dr. Mohamud Daya, a professor of emergency medicine at the Oregon Health and Science University in Portland, Oregon, who runs a large clinical trial network studying drugs for emergency conditions such as brain injuries, strokes and heart attacks.

“The average consent form takes anywhere between 30 to 60 minutes, to go through,” Daya said. “You need to spend time with people, give them time to have things explained and ask questions.”

Participants might be asked not just for their medical histories but also the names, addresses and phone number of the volunteer’s friends, family and neighbors, as well as information about their social media accounts. The information collected about friends and family helps researchers find participants if they lose track of them, to ask if they still want to take part, Hiatt said.

The COVID-19 vaccine trials won’t last for months but years as researchers watch for long-term side effects, so staying in touch is crucial.

“There are all sorts of people who drop out. They lose interest. They move, they get a new cell phone,” Hiatt said.

While it’s unethical to pay volunteers large sums of money to take part in clinical trials, volunteers can expect to be compensated for their time and effort. What other trials will offer isn’t known, but the Moderna Phase 1 trial, which launched in March, offered participants $100 for each in-person visit they completed. Those who attended all 11 planned visits over a 14-month period could receive a total of $1,100.

The real cost is the medical staff who recruit, interview and track all the participants. It typically costs several hundred dollars per participant in staff time alone. For a clinical trial with 30,000 people in it, that’s upwards of $6 million. Every person who drops out means another must be added.

Running a large clinical trial is complex and finding the right mix of volunteers is often challenging and can take months, but Hiatt thinks the COVID-19 trials will be different.

“The altruistic aspect of this is appealing,” he said. “People want to be part of the cure.”

Are you worried about your elderly parents? 8 tips to help seniors stay mentally acute in isolation

Mon Jul 20 , 2020
Fitness coordinator Janet Hollander leads session of Balcony Boogie from outside Willamette Oaks in Eugene, Ore. for residents isolated in apartments during pandemic, April 21, 2020. Just what we need: Another reason to fear and loathe COVID-19. If your loved ones are old, ill and confined to an assisted living or senior […] 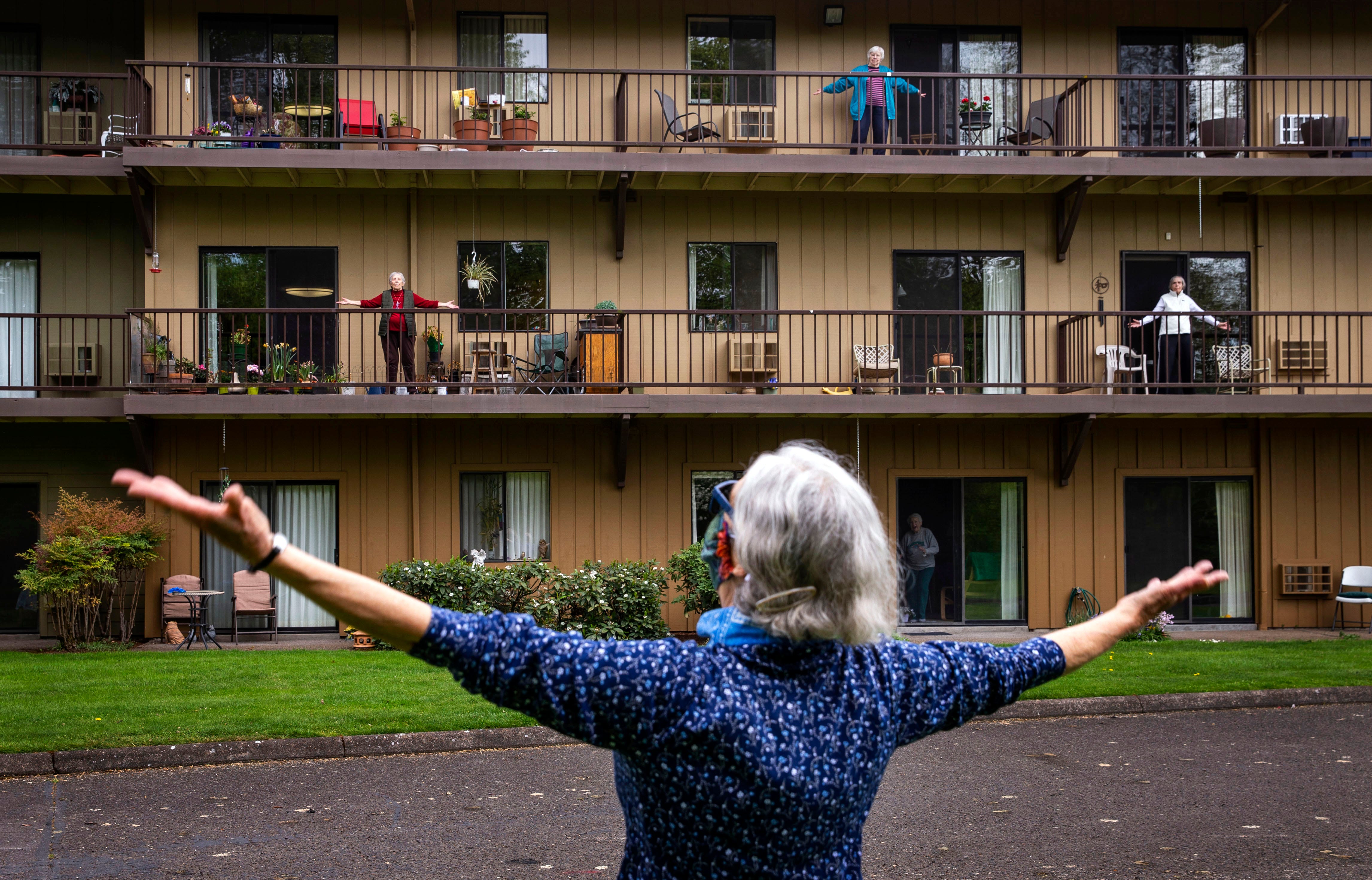