Classes have not even started at the College of the Holy Cross, in Worcester, Massachusetts, but there are growing concerns over the students’ disregard of coronavirus safety protocols. Over the weekend, campus police busted a large party at an off-campus apartment rented by Holy Cross students, eliciting growing concerns that such gatherings could turn into coronavirus super-spreader events.

© Mark Makela/Getty Images
Signs at University of Colorado Boulder provide incoming freshman moving into campus with physical distancing guidelines due to the Coronavirus pandemic on Aug. 18, 2020 in Boulder, Colo.


“Not only did the number of people in attendance exceed the state limit on the number of people at a gathering, but attendees were not wearing masks or adhering to physical distancing guidelines,” said college administrators in a letter to the community, calling the behavior “highly irresponsible.”

According to the school, the party has led to a potential cluster of infections, and if such behavior continues, the rest of the student body may be unable to return to campus, later this year.

Similarly, only eight days into the semester, Notre Dame was forced to cancel in-person classes for two weeks, after seeing a “dramatic increase” in positive coronavirus, with 336 students infected as of Friday. Most infections have stemmed from off-campus gatherings, according to the University’s contact tracing analysis.

“Students infected at those gatherings pass it on to others, who in turn, pass the virus on to a further group, resulting in the positive cases we have seen,” stated Notre Dame President Rev. John I. Jenkins on Tuesday, in a stern message to the community.

Although the university had initially begun crafting plans to send undergraduate students home, for the time being, he said, he would allow students to remain on campus, and move all undergraduate classes to remote instruction for two weeks. However, Rev. Jenkins warned failure to comply with health protocols could result in sending students home.

(MORE: Summer’s ending. How are US schools’ reopening plans still in crisis?)

Such scenes are far from isolated incidents, and are examples of the many challenges confronting universities and colleges as they reopen.

Numerous videos of packed parties on campuses across the country have been widely shared on social media, often with no social distancing or face masks, much to the dismay of school administrators and public officials alike.

Syracuse University Vice Chancellor J. Michael Haynie severely admonished first-year students who had gathered on the school’s quad, calling their behavior “selfish and unsettling,” and stating, “Make no mistake, there was not a single student who gathered on the Quad last night who did not know and understand that it was wrong to do so.”

(MORE: Colleges rethink reopening: ‘If these steps are not successful, we’ll have to send students home’)

At Oklahoma State University, over 20 cases have been confirmed in a single sorority house.

Iowa State University administrators issued a stern warning that a failure to abide by the school’s rules and continuing partying could lead to remote instruction, after over 175 students tested positive for the virus.

Some schools are already acting swiftly, and threatening disciplinary actions against students who do not abide by the set protocols.

Purdue University has suspended 36 students, including those who had hosted a party and those who had attended the gathering in violation of social distancing policies.

(MORE: Experts warn many schools should delay reopening, as data indicates virus resurgence across much of country)

Duke University is investigating seven cases of “flagrant misconduct and persistent non-compliance” with COVID-19 rules by students or groups of students, and if found responsible, students and organizations could face a range of possible sanctions, including disciplinary probation, suspension, or permanent dismissal.

Drake University in Iowa barred 14 students from campus for two weeks for partying, and several University of Connecticut students were evicted from on-campus student housing after videos of dorm-room parties emerged Monday night. On Wednesday, the university announced eight on-campus students, and three commuter students, had tested positive for COVID-19.

Colleges and universities that have opted either to reopen, or allow students to live on the premises, are relying heavily on students to abide by the precautions and behavioral expectations outlined by the school.

But some experts question whether it is possible to expect 18 to 23 years-old to study, eat, and live in close quarters, all while acting responsibly and maturely enough to sacrifice most of the social interactions and traditions associated with college life.

“I think you’re asking for something, that’s not going to happen,” he said, adding it will be incredibly difficult to get students to understand that this is a life and death situation.

Angry University of North Carolina at Chapel Hill students agreed, calling the situation a “clusterf—” after in-person classes barely lasted a week into the fall semester before being halted when four COVID-19 clusters surfaced, with 130 students testing positive and the positivity rate on campus surging from 2.8% to nearly 13.6%.

In a scorching editorial in the student newspaper The Daily Tar Heel, students wrote, “We all saw this coming … University leadership should have expected students, many of whom are now living on their own for the first time, to be reckless. Reports of parties throughout the weekend come as no surprise.”

(MORE: Why stopping COVID at schools may not be as easy as taking temperatures)

Watching the carefully crafted COVID-19 reopening plans by top universities rapidly unravel, some schools are already reassessing their own fall plans. Dozens of schools that had previously committed to a hybrid system for the fall, have now reversed course and decided to conduct classes remotely.

Ithaca College, in upstate New York, informed its 5,500 students on Tuesday that it would not be welcoming them back to campus this fall. “We have learned from watching other communities how delicate this equilibrium is, and how quickly it can be disrupted,” wrote President Shirley M. Collado in a message to the community.

Similarly, at Michigan State University, which planned to reopen on Sept. 2, classes are now going to be remote, asking students who planned to live on campus, to stay home.

In a letter to students, Michigan State president, Dr. Samuel Stanley, underscored, in particular, the challenges seen “at other institutions as they re-populate their campus communities,” writing further that “it has become evident to me that, despite our best efforts and strong planning, it is unlikely we can prevent widespread transmission of COVID-19 between students if our undergraduates return to campus.”

Just last week, big-name universities such as Stanford, Brown and the University of Pennsylvania all announced their decision to keep students at home.

The enormous challenges of welcoming students back to campus during the pandemic are becoming increasingly apparent to school officials and public health experts.

“I think it’s too much to ask right now,” Dr. Offit told ABC News. Campuses are just “another breeding ground for easy transmission.”

The students’ behavior is also a source of great concern to the communities around the universities and colleges, fearing that it will put them at risk for coronavirus. In Massachusetts, local residents expressed their alarm after the Holy Cross party, while Somerville and Medford residents held a protest outside the Tufts University president’s house Wednesday, over plans to bring students back to campus.

Boston College is hiring a police detail to break up weekend parties that grow too large.

In Alabama, Tuscaloosa Mayor Walt Maddox tweeted a picture of a large crowd of mostly unmasked University of Alabama students, gathered downtown, saying that “we are desperately trying to protect” the city.

Students too are anxious and frustrated about the chaos, with some feeling that school officials have failed them.

“We’re angry — and we’re scared,” wrote the UNC students. “We’re tired of the gaslighting, tired of the secrecy, tired of being treated like cash cows by a University with such blatant disregard for our lives.”

But ultimately, it all boils down to personal choices, according to Penn State President Eric Barron. “I ask students flaunting the university’s health and safety expectations a simple question: Do you want to be the person responsible for sending everyone home?”

“I want you to understand right now and very clearly that we have one shot to make this happen. The world is watching, and they expect you to fail. Prove them wrong. Be better. Be adults,” concluded Syracuse’s Vice Chancellor Haynie.

Sun Aug 23 , 2020
New Buffalo Bills edge rusher Mario Addison had a pretty normal-feeling zoom press conference on Friday before practice. He spoke about getting to know his new teammates in Buffalo during a pandemic after seven seasons in Carolina. How each member of the team’s defensive line is motivating each other on […] 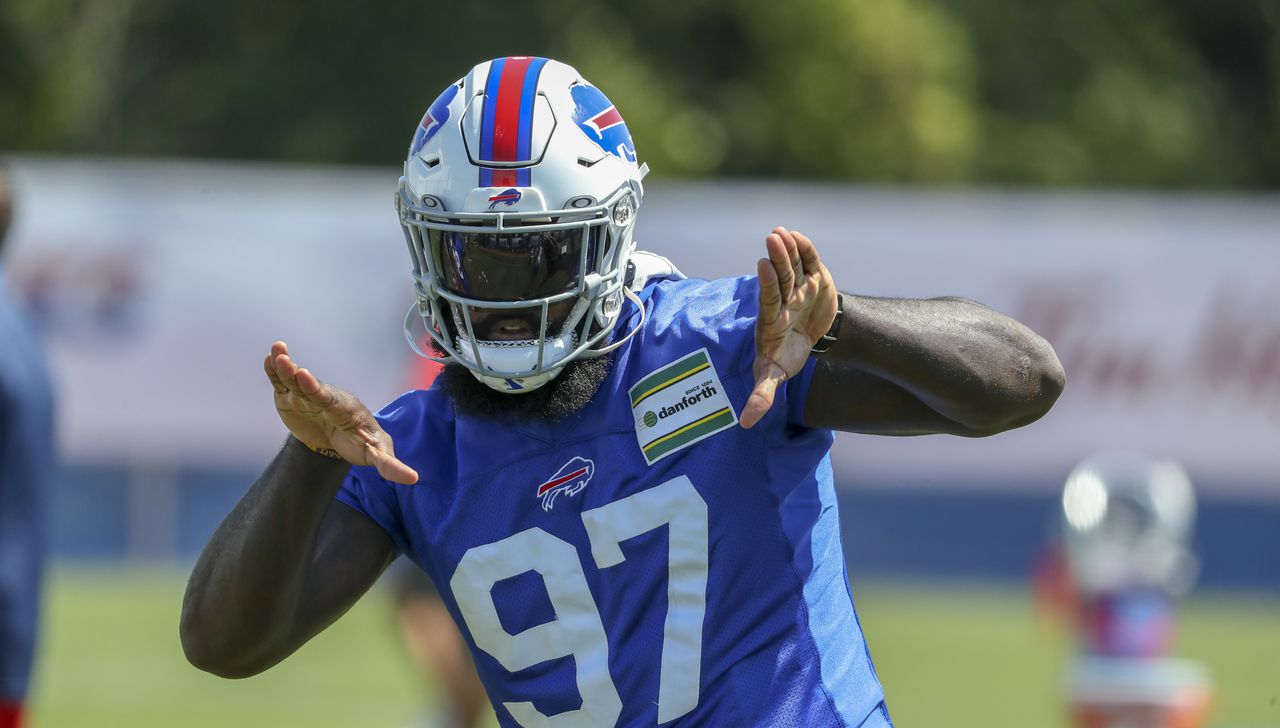