President Trump amplified a false claim Thursday that California-born Kamala Harris might be ineligible to serve as vice president, a smear that recalls the racist “birther” campaign he waged against former President Obama.

It marked a new turn in Trump’s scattershot response to Democratic rival Joe Biden’s selection of Harris as his running mate. Trump and his allies have careened through a jumble of contradictory attacks on the California senator’s ideology, demeanor and background, using well-worn sexist and racist tropes. Harris is the first Black woman and first Asian American on a major-party ticket.

In questioning Harris’ American citizenship, Trump is returning to what fueled his rise in Republican politics — his insistence that Obama, the nation’s first Black president, was born in Kenya instead of Hawaii.

“This is only the second time that that has happened in our nation’s history. And the first time was with President Barack Obama. So why is it that only the two Black candidates are questioned about the legitimacy of their citizenship?” said Valerie Jarrett, a former top Obama advisor.

The conspiracy theory about Harris’ standing to be vice president began on Wednesday, when John C. Eastman, a law professor and failed Republican candidate for California attorney general in 2010, wrote a column in Newsweek stating that Harris may not meet the constitutional requirements for the vice presidency of being a “natural-born citizen.” He questioned whether Harris’ parents — her father is from Jamaica and her mother was from India — were naturalized citizens at the time that Harris was born in Oakland.

Jenna Ellis, a Trump advisor and lawyer for his reelection campaign, retweeted the article Thursday morning. Later that day, the president answered a question about it at a White House briefing.

“I heard it today — that she doesn’t meet the requirements,” Trump said, complimenting Eastman as “a very highly qualified, very talented lawyer.” He added that he had “no idea” if the argument was correct.

It’s not. The 14th Amendment to the Constitution says that anyone born or naturalized in the United States is a citizen. A Supreme Court ruling in 1898 confirmed birthright citizenship.

On Twitter, Ellis defended her promotion of Eastman’s article.

“It’s an open question, and one I think Harris should answer so the American people know for sure she is eligible,” she wrote.

Erwin Chemerinsky, dean of the UC Berkeley School of Law, said such insinuations that Harris could be ineligible are “nonsense as legal arguments.”

“John Eastman for years has said the Supreme Court is wrong and he doesn’t believe there should be birthright citizenship,” Chemerinsky said. “That’s not the law. That’s John Eastman’s opinion.”

In reviving the birther playbook, Trump has added another volatile element to an already-muddled approach to campaigning against Biden’s newly-minted running-mate. Trump and Republicans have alternately portrayed Harris as a radical leftist and a lock ’em up cop. Allies in the media have fixated on how to pronounce her name and whether her biracial background qualifies her as truly a Black American.

The confused messaging underscores how vexing Harris, the junior senator from California, may be as a campaign foil.

“I’ve just been absolutely stunned that the person most likely to be picked was picked, and yet they were still caught flat-footed,” said Bill Burton, who served as deputy press secretary under Obama.

Trump campaign staff did not respond to repeated requests for comment.

During the 2016 campaign, Trump displayed a knack for defining his opponents with pithy nicknames — “Lyin’ Ted” Cruz, “Liddle Marco” Rubio, “Crooked Hillary” Clinton — that he endlessly repeated. Because of Trump’s past successes, Biden’s vice presidential vetting team asked prospective running mates which sobriquet Trump might bestow upon them.

Sure enough, when Biden announced his pick on Tuesday, the Trump campaign swiftly responded with an online video dubbing Harris “Phony Kamala” and accusing her of tacking to the far left during her failed presidential campaign.

“That first ad that they posted I thought was very good, and I think could be effective,” said Stutzman, a Republican consultant based in Sacramento who has been critical of the president.

By attempting to run the same birther playbook at a time when the country’s attitudes on race have shifted significantly toward supporting Black Lives Matter, the president and his allies threaten to undermine his own campaign’s messaging.

“That’s disgusting Trump-ism,” Stutzman said. “That is exactly the type of tactic and theme that will not help the Trump campaign try to win suburban voters who otherwise may be leery of a Democrat Party that’s too far to the left of what they want, and they don’t think Joe Biden can rein it in.”

Trump has also attacked Harris’ personality, saying she was “nasty” during the confirmation hearings for Supreme Court Justice Brett Kavanaugh. A fundraising email from his campaign described her as “the meanest” U.S. senator.

“Calling a woman nasty really implies that all women should fall in line and be seen and not heard,” said Amanda Hunter, research and communications director for the Barbara Lee Foundation, a non-profit that supports women’s involvement in politics. “It’s an antiquated attempt to impugn her character.”

The insult has echoes to the 2016 campaign, when Trump derided Clinton as a “nasty woman” during a presidential debate.

Trump has been similarly disjointed when it comes to settling on a line of attack against Biden. He has described him as “Sleepy Joe,” implying that he is too old and doddering for the presidency. But his campaign has also portrayed “Joe Biden’s America” as a high-octane mess of crime and chaos, which seems at odds with the accusation that he is feeble. Lately, his campaign has tried out a new nickname: “Slow Joe.”

“Over the last six months, their attacks have really fallen flat and not caught on,” said Ian Sams, a former spokesman for Harris’ presidential campaign. “They’ve flailed around, throwing different versions of branding at him. Now we’re having the same thing happen with Kamala.”

Those who have worked on Harris’ past campaigns say the onslaught is nothing new. When she was running in the presidential primary, for example, the Howard University graduate was repeatedly asked about her blackness and if it was representative of the nation’s Black community. Sams said she was unfazed.

“It was kind of a ‘let the haters hate’ approach,” Sams said. “Kamala Harris has seen pretty much every nasty attack in the book in her career. …She knows that’s part of the game.”

Brian Brokaw, who ran her campaigns for attorney general, said the convoluted attacks are a sign that the Republicans don’t know what to make of her.

“She has confounded her opponents at every stage of her career,” he said. “She’s really difficult to pigeonhole into any one particular ideology.”

That ideological uncertainty was a challenge for Harris in the presidential primary, where she struggled to define her candidacy in comparison to progressives such as Sens. Bernie Sanders and Elizabeth Warren on her left, and more moderate rivals such as Biden to her right. But as a vice presidential pick, where she is expected to champion Biden’s platform, not specify her own, the ambiguity can be beneficial, making it more difficult for the GOP to coalesce on a single narrative against her.

Democrats were on guard for tough attacks against Biden’s vice-presidential pick before she was even chosen. Jarrett and other female Democratic strategists wrote a memo last week urging media outlets to be on the lookout for sexist or racist undertones in discussing the candidate.

When Biden and Harris made their first joint appearance as a presidential ticket on Wednesday, Biden made a point of denouncing Trump’s disparaging comments about his running-mate.

“We have to have her back,” Biden said, pledging to defend Harris.

Other Democrats, particularly women, have been quick to denounce rhetoric being lobbed at the California senator, many citing their own experience with sexism.

“We’ve seen it again and again: When women step up to lead, they face all kinds of hurdles — including sexist, baseless smears. I know what that’s like,” tweeted New York Sen. Kirsten Gillibrand, who ran against Harris and Biden in the Democratic primary.

Women’s political activity surged after Trump’s election — in part a reaction to the gendered treatment that Clinton, as the first woman to get a major-party presidential nomination, endured. Now, that engagement could offer potent protection for Harris.

“Women across the country are fed up,” said Hunter of the Barbara Lee Foundation, “and there’s a record number of women already serving in office that are available surrogates to stand up for Sen. Harris in real time when she faces sexism.”

I Tried A CBD Self-Care Routine & Am I Chill Yet?

Fri Aug 14 , 2020
Lately, I’m not above any attempt to make all the everything of this past year feel a little less stressful. I long to be the type of person who can keep plants alive, have a flawless self-care morning ritual and not fall into negative stress spirals despite living through a […] 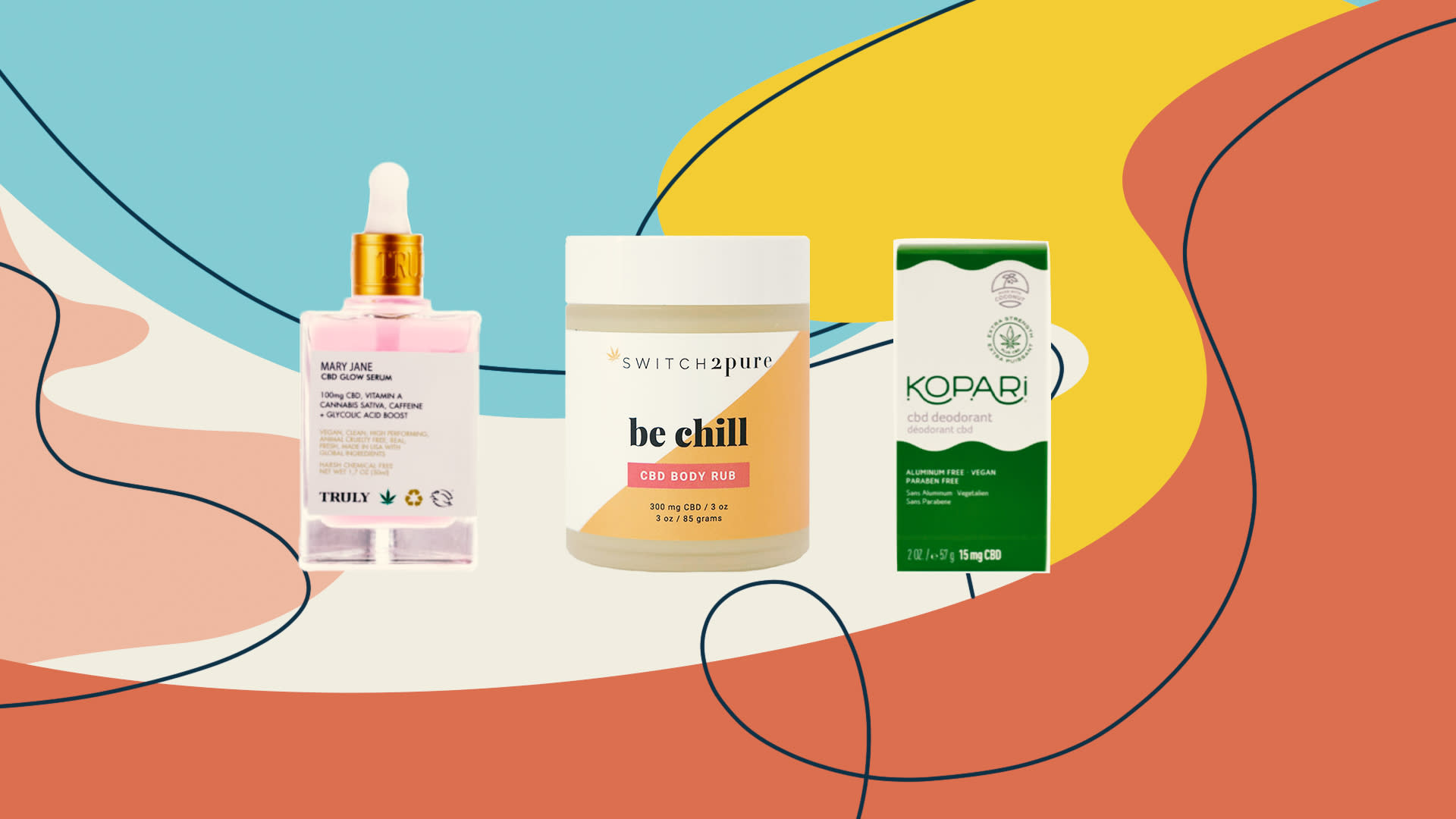