Beanie Feldstein struggled to get the final monologue of How To Build a Girl right, given the difficulties of the Wolverhampton accent.

The 27-year-old American star said she relished visiting the West Midlands city after she got the role and spent some time working in a local shop to immerse herself in the unique accent.

“I didn’t quite understand the regional specificity of how many accents exist in your very small country,” Feldstein told Yahoo Movies UK.

She added: “I knew I had to go to Wolverhampton and meet people that grew up there and still live there to understand the accent in its purest form, which is what Johanna would have been born with and spoken with.

“I had such a lovely time. The whole city — I called it a town and I learned it actually became a city in 2000 — was so welcoming and kind.

“I got to pull my own pint and work in a shop and run the till. It was a dream. It was so kind of out of body, truly.”

Feldstein said she was most nervous about pulling off the “beautiful” final monologue, in which Johanna breaks the fourth wall and addresses the women in the audience.

The star said she found the scene to be “so powerful” and that this made her nerves jangle at the prospect of whether she could do it justice.

She added: “It’s very wordy and very poetic in some ways in how it’s written.

“So I have a photo of me and my dialect coach crying and hugging when we wrapped that scene because it was a huge weight off of our shoulders collectively that we did it.”

Read the full interview with Beanie Feldstein in which she discusses the prospect of making the sequel to How To Build a Girl and why working with female directors is so important to her.

Yahoo Movies UK: I wanted to start by asking whether you were aware of Caitlin Moran’s book before taking on this role?

Beanie Feldstein: I had heard Caitlin’s name many times, but I’m ashamed to say that I had never read the book, or How To Be a Woman. But once I read the script, I devoured everything she has ever said out loud, written on a paper or written in a book.

So in the time between reading the script and going to England to formally audition, I devoured every single ounce of Caitlin that I could soak up from all of my research. So I read all of her books — including, of course, How to Build a Girl — and then watched like every video of her on YouTube. I could basically tell her anything she needs to know about her life.

You’re playing a British person here and, not only that, but you’re doing that Wolverhampton accent, which is so hard. I was born half an hour down the road and I couldn’t get near that accent. How hard was it to get it right?

I think as Americans — and I don’t mean to throw us under the bus at all — we have a sort of elementary understanding of British actors. I think the average American could say there’s a posh one, more of a Cockney one and then maybe generally The North. I understood that in London there was maybe three or four, but I didn’t quite understand the regional specificity of how many accents exist in your very small country.

Growing up in Los Angeles, if you drive eight hours to San Francisco, we would have pretty much the same accent. There’s “valley girl” and specific sort of twangs, but overall it would be fairly indistinguishable I think between us. It’s so different so I was just learning that first of all.

I had such a lovely time. The whole city — I called it a town and I learned it actually became a city in 2000 — was so welcoming and kind. I got to pull my own pint and work in a shop and run the till. It was a dream. It was so kind of out of body, truly. Definitely the first couple of days speaking in the accent to people that lived there and have that accent was very intimidating, but once I ripped the Band Aid off and got going, it was very special and a very unique moment in my life that I will never forget.

Were there any particular lines or words you found particularly hard to get in the accent?

Almost every line! I do joke with Caitlin that “Johanna Morrigan”, just that name, is its own sort of battle. The dog’s name is Bianca, which is totally different in a Wolverhampton accent. It’s like seven vowels in one sound.

There were little moments. But I remember the final monologue, which is arguably I think my favourite moment, I was so nervous for. To spoil a little bit, it’s a direct to camera. She’s breaking the fourth wall and speaking directly to the audience about her journey and how she built herself. It’s so beautiful and so purely Caitlin. It just represents her as a writer and her ethos and her feminism. It’s just so beautiful and it was so powerful for me, as Beanie, to read that I was very nervous to perform it.

But it was also very wordy. It’s very wordy and very poetic in some ways in how it’s written. So I have a photo of me and my dialect coach crying and hugging when we wrapped that scene because it was a huge weight off of our shoulders collectively that we did it. So maybe that was the hardest one.

Throughout your career, if you look at your biggest roles, you’ve worked a lot with female filmmakers. Is that a conscious choice on your part?

The first film I ever got to be a part of — and I need to make sure I say the British version — is Bad Neighbours 2, with Seth Rogen and Rose Byrne. It’s all about girls wanting to party. It’s a very feminist story. So my first film that I ever got to be a part of was very feminist, with girls wanting to have equal rights to men, even though it’s a very comedic setting. And that is very much who I am. It’s very important work to me. So to start off the bat with something that was so comedically in line with who I am, but also the messaging was very in line with who I am, set me off on the right foot.

Then I did Lady Bird, and I think Lady Bird sort of changed my life forever. It’s actually the reason that I got How To Build a Girl because Alison Owen, our producer, works with the Savannah Film Festival. So she was in the States five months before Lady Bird came out in the UK and she saw it at Savannah and she thought I maybe could be right for Johanna. So it’s because of that movie that I got this movie.

It just changed my life in many ways, but I think the biggest was knowing that I could be a part of something that was so meaningful to me in a deep and profound way. It would’ve meant a lot to me to watch as an audience member and it meant so much to me to be a part of creating it. And then I thought: “I just want to do this”. If I have been lucky enough to do this at such a young age and so early in my working life, I really want to continue this and make thoughtful choices.

I always want to be playing a character who is complex and fully fleshed-out and unique and strong. I want to be a part of a story that is inclusive in any sort of multitude of ways. I have been very lucky that I entered the industry at a time when those are being given to women more readily than they used to be. We still have so much farther to go, but I feel incredibly honoured to have worked with so many women in such a short amount of time and it is meaningful to me.

Just as a final question, there is a sequel book. If they decide to film it, will you be dusting off the accent and coming back?

It’s literally sitting right over there on my bookshelf. It came out the summer we were filming How To Build a Girl and I didn’t let myself read it because I was like: “I need to get to the end of her first journey before I get to start her second journey.” But as part of my wrap gift, Caitlin signed a copy for me and I read it on the plane ride home.

It is a wild ride, so I would love to put the wig back on, put the accent back on and give her another go. I love the character so much and she means a lot to me, so it would be a joy for sure.

I’m sure Wolverhampton would love to have you back!

How To Build a Girl is available on Amazon Prime Video from 24 July.

Thu Jul 23 , 2020
Click here to read the full article. The Ascena Retail Group bit off more than it could chew and — in a desperate attempt to streamline — ran out of time. COVID-19 cut short Ascena’s bid to remake itself as a smaller, more viable company, forcing it to file for […] 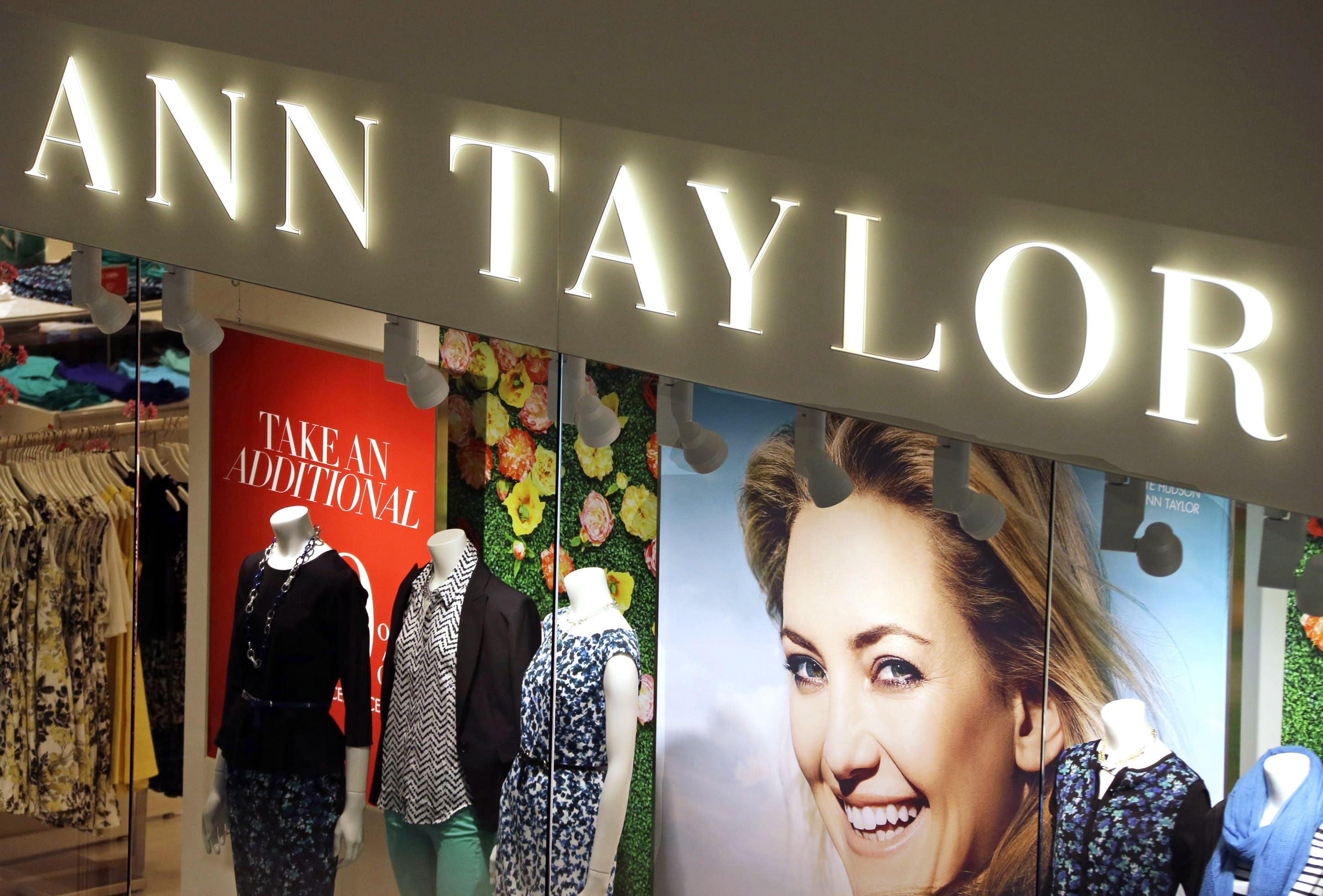