Another pharmaceutical giant announced a vaccine deal with the U.S. on Wednesday while Joe Biden and the rest of the Democratic celebs bid adieu to Milwaukee’s political convention before the coronation train ever rolled into town.

Milwaukee’s 2020 Democratic National Convention suffers the same fate as Charlotte, where plans for a full-blown GOP convention have been whittled down to a few small gatherings later this month.

While the nation waits for a vaccine that could fully reopen schools and businesses, the University of Connecticut became the first top-level college program to cancel its football season. And cruise lines voluntarily extended their moratorium on sailings in U.S. waters another month, through October.

📰 What we’re reading: Kids are less likely to die from the coronavirus. But some experts say a lack of information about how they contract and transmit COVID-19 will leave the nation unprepared when schools reopen.

Virginia on Wednesday became the first state to roll out a smartphone app to automatically notify people if they might have been exposed to the coronavirus. The new pandemic technology, created by Apple and Google, is available in Apple and Android app stores as of Wednesday. The app relies on Bluetooth wireless technology to detect when someone who downloaded the app has spent time near another app user who later tests positive for the virus. State officials said the app doesn’t track user location or collect personal information.

“We’re using every possible approach to fight this virus and keep Virginians healthy,” Virginia Gov. Northam said in a statement.

When Milwaukee landed the 2020 Democratic National Convention more than a year ago, city leaders hoped 50,000 people would flood into town for four non-stop days and nights of politics. Now even the party’s nominee isn’t going.

Officials announced that Joe Biden will accept the party’s nod from his home in Delaware – and the other convention speakers won’t travel to Wisconsin, either. Organizers cited the “worsening coronavirus pandemic.”

“This convention will look different than any previous convention in history,” said Joe Solmonese, the convention’s chief executive. “It will reach more people than ever before, and truly be a convention across America for all Americans, regardless of which party you belong to or who you’ve voted for in previous elections.”

When the Trump administration waived most federal hospital inspections and suspended hospital infection reporting in March due to the coronavirus pandemic, patient safety advocates warned it could lead to big increases in hospital-acquired infections. Jumps in infections at two hospitals in New York and St. Louis – up to five times higher – suggest they may have been right.

“Many facilities will take advantage of those waivers” because their infection prevention staff haven’t been able to properly monitor patients for serious infections, wrote Kathleen McMullen and her co-authors in a commentary in the American Journal of Infection Control. Controlling the spread of COVID-19 within hospitals, the authors wrote, took up most of infection prevention staffers’ time.

Florida became the second state to confirm more than 500,000 cases of COVID-19. The state Department of Health on Wednesday reported 5,409 new cases, bringing the state’s total to 502,739. California leads the nation, with more than 526,000 cases, according to data collected by Johns Hopkins University.

Chicago Public Schools are joining a lengthening line of major school systems that will start the academic year fully online. The district, which had initially planned to launch a hybrid online and in-person model starting Sept. 8, said Wednesday the continued uptick in coronavirus cases and concerns from parents urged them to adjust the plan.

Tens of thousands of families indicated in a district survey that they did not intend to send their children to school. And the city’s teacher’s union threatened to go on strike over concerns about in-person classes. The district said it will consider switching to a hybrid learning model in the second quarter, which begins on Nov. 9.

The cruise industry has voluntarily extended its pause on operations in U.S. waters until “at least” Oct. 31, a month past the date the Center for Disease Control and Prevention’s “no-sail” order is set to expire. CLIA’s member lines carry 95% of the world’s ocean-going cruisers. The new order will apply to all CLIA member ships that can carry 250 or more passengers.

“We believe it is prudent at this time to voluntarily extend the suspension of U.S. ocean-going cruise operations to Oct. 31,” Cruise Lines International Association, the major trade organization for ocean-going cruise lines, said in a statement.

Kids less likely to die, but schools could become hot spots for spread

As many school districts prepare to reopen campuses, some experts fear classrooms will become the next incubators for large coronavirus outbreaks. Advocates for resuming school in person, including President Donald Trump, have repeatedly claimed that children pose less of a risk of spreading COVID-19 and that the benefits outweigh the risks. About 6 out of 100,000 school-age kids are hospitalized with COVID-19 compared with the overall rate of 130 people per 100,000, according to the Centers for Disease Control and Prevention. However, a recent study estimated that closing schools in March reduced the rate of new COVID-19 cases by 66%.

“We show that it actually did make a difference in cases and in deaths,” said lead study author Dr. Katherine Auger, an associate professor at the University of Cincinnati College of Medicine. “That was a very important thing society did.”

The University of Connecticut football team became the first bowl-level program to cancel its 2020 season Wednesday, citing an “unacceptable risk level” faced by the student athletes. UConn, which plays as an independent, had games against Illinois, Indiana, Maine and Mississippi dropped from the schedule due to “conference-only” schedules being played by those schools. Games against North Carolina and Virginia might have faced the same fate. The players released a joint statement through the school citing “full support of the decision to not compete in 2020.”

One of the first cruise ships to resume overnight sailing in U.S. waters since the pandemic shut down the cruise industry has reported one case of COVID-19. Passengers are quarantining on board UnCruise Adventures’ Wilderness Adventurer “until the state of Alaska deems it safe for them to return home,” according to a travel alert posted on the cruise line’s website. The ship was able to bypass the federal no-sail order because its capacity is less than 250 passengers and crew.

“The guest is showing no symptoms and no other guests or crew are showing outward symptoms of any kind,” the cruise line said. “All guests have been informed and will quarantine until the state of Alaska deems it safe for them to return home.”

Johnson & Johnson announced a deal with the U.S. government for 100 million doses of its SARS-CoV-2 vaccine candidate, Ad26.COV2.S, for use in the United States – if and when the vaccine wins Food and Drug Administration approval. The government may also purchase an additional 200 million doses, the company said in announcing the $1 billion deal. A clinical trial is underway, and the company said it is evaluating one- and two-dose regimens. The plan is to provide more than 1 billion non-for-profit doses globally through the course of 2021.

“We are scaling up production in the U.S. and worldwide to deliver a SARS-CoV-2 vaccine for emergency use,” said Dr. Paul Stoffels, Johnson & Johnson’s chief scientific officer.

More than 500 inmates at the Arizona State Prison Complex Tucson Whetstone Unit have tested positive for COVID-19, authorities said. The 517 inmates, almost half the unit’s population of 1,066, are being housed together in separate areas and receiving medical care, according to a statement released by the Arizona Department of Corrections, Rehabilitation and Reentry. The department did not immediately respond to questions, including when tests were performed and whether every inmate there was tested. The tests came after inmates at the Whetstone Unit staged a peaceful walkout last week due to virus concerns.

Moderna in talks with ‘several countries’ for vaccine candidate

Biotech giant Moderna said Wednesday it expects to fully enroll 30,000 volunteers in the crucial Phase 3 study of its COVID-19 vaccine next month. Moderna’s vaccine candidate, backed by almost $1 billion in federal funding, last week became the nation’s first to begin such a large trial. It’s being tested at scores of sites in the U.S., with results expected as soon as October.

“We began discussions with several countries for supply agreements for (vaccine candidate) mRNA-1273 and as of July 31, we have received approximately $400 million of customer deposits for potential supply,” Moderna said in a statement.

Top Democrats and White House negotiators expressed optimism Tuesday that a deal on another coronavirus stimulus package could be done by the end of the week. The movement followed House Speaker Nancy Pelosi, D-Calif., and Senate Minority Leader Chuck Schumer, D-N.Y., meeting for another day with Treasury Secretary Steven Mnuchin and White House Chief of Staff Mark Meadows.

“Even though there remains a number of unresolved issues, I would characterize the conversations as productive and a step in the right direction,” Meadows said after the meeting. “Probably the most productive meeting we’ve had.”

By the numbers: Record deaths in California, Florida, Georgia

A USA TODAY analysis of Johns Hopkins data through late Tuesday shows one state set records for new cases in a week while three states had a record number of deaths in a week. New case records were set in Hawaii, and also Puerto Rico. Record numbers of deaths were reported in California, Florida and Georgia. The United States has reported 4,771,080 cases and 156,801 deaths.

Shortage of Clorox disinfecting wipes could stretch into 2021

Although Clorox officials said in May that they expected retail shelves to be stocked by this summer, they now anticipate it will take longer.

Linda Rendle, president and CEO-elect of The Clorox Co., says it could take until year’s end to reach supply levels “that we need to be at.” Rendle and Clorox CEO and chairman Benno Dorer said the demand for the company’s disinfecting wipes has outpaced expectations and isn’t expected to slow.

“We’re certainly not at all happy with our service levels for our retail customers on many products, as demand for our products exceeded our own expectations in the face of this persistent pandemic,” Dorer said during the call. “We have a high sense of urgency on this with all hands on deck.”

Wed Aug 5 , 2020
WASHINGTON (AP) — The principle of religious freedom is important to most Americans. But as President Donald Trump touts his support for it during his reelection bid, there are notable fault lines among people of different faiths and political ideologies over what it truly means. About 8 in 10 Americans […] 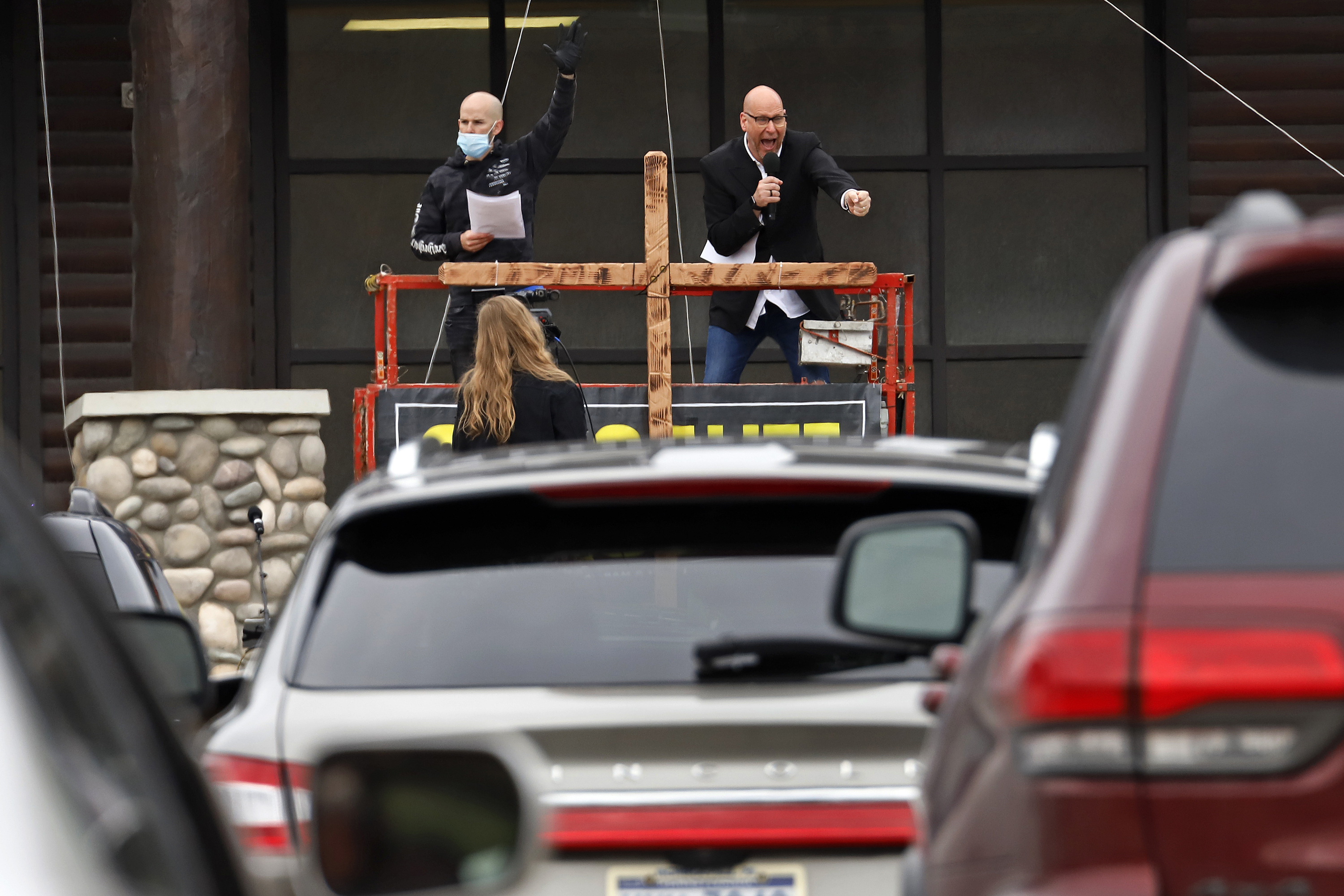