In early June, Erynn Chambers stepped onto her porch, just outside the front door of her North Carolina home, opened TikTok on her phone, and began to film herself.

“It went viral pretty much overnight,” Chambers said. “It was incredible.”

Chambers refers to her content, made under the user name @Rynnstar, as “edu-tainment” — education and entertainment — and she uses it, in part, to raise awareness of the American Black experience. She’s one of a number of Black creators on TikTok who have used the app as a platform for advocacy against racism. Chambers’ post has nearly 2 million views and was reposted countless times.

But TikTok sits uneasily at the intersection of viral social media, celebrity and activism. The platform has long been accused of elevating white voices over Black voices. While Black creators have been integral to the rise of TikTok — some of the most popular dances, challenges and trends were born in the imaginations of Black TikTokers — their work hasn’t always gotten the same level of attention as that of their white peers.

Black creators said that their content wasn’t highlighted on the “For You” page at the same rate as that of their white peers and that their videos have been taken down and audio-disabled without explanation, and experts say they often don’t get credit for trends and challenges they start.

Over the last few months, however, in the wake of the deaths of George Floyd in police custody in May and Breonna Taylor in March, TikTok has made some forays into elevating Black creators on the app. Yet some worry that there’s a flip side to the elevation of activism: burnout.

In early June, just days before Chambers’ viral video was posted, TikTok posted an apology to its Black creators, saying it was sorry to those “who have felt unsafe, unsupported, or suppressed.” TikTok promised long-term action to make the platform more diverse and to elevate Black creators. The apology came after a TikTok Blackout in May, an on-app protest against the suppression of Black voices, as protests against police brutality and racism took place worldwide.

Since then, some users of TikTok, including many Black creators, have reported seeing a more diverse and inclusive “For You” page, TikTok’s infinite scroll homepage, which feeds users a constant stream of videos. In the past, the “For You” page has been accused of what might be called infinite whiteness.

But grading the app’s move toward inclusiveness and how successfully it’s amplifying Black voices differs across content creators. Some say they are optimistic that a more inclusive TikTok is in the works; others describe the battle for representation as simply exhausting. Each of the half-dozen Black TikTok creators who spoke to NBC News said they’ve experienced burnout — but some, who say they are tired of arguing with followers and fighting for representation, are considering leaving the app altogether.

One frustration that can lead to burnout is the lack of credit given to Black creators who originate trends on the app, said University of Southern California assistant journalism professor Allissa Richardson, author of “Bearing Witness While Black: African Americans, Smartphones and the New Protest #Journalism.”

“I saw a ton of Black youth creators complaining that even though they made up these dance challenges, they were increasingly being pushed to the bottom of the search results on TikTok,” Richardson said.

Most famous is the renegade, a dance phenomenon that helped propel white creators like Charli D’Amelio to over 70 million followers. It was created by a Black 14-year-old named Jalaiah Harmon. Although the trend was, for a time, the most popular on the app, Jalaiah was recognized only toward the end of the trend’s life cycle by mainstream media and TikTok alike, garnering profiles in the The New York Times and Teen Vogue. She now has over 1 million followers on TikTok.

TikTok isn’t the only social media platform to have come under scrutiny over its handling of race. YouTube, Twitter and Reddit have been accused of allowing hate speech to thrive.

“TikTok is acknowledging the problem. They’re not saying it’s not real. They’re saying we have work to do,” said Bria Jones, 26, a fashion, beauty and lifestyle TikTok influencer based in Kansas. Jones, who goes by @HeyBriaJones on the app, has grown a base of more than 278,000 followers in just under a year.

Mutale Nkonde, a fellow at Stanford University’s Digital Civil Society Lab who is a member of TikTok’s independent advisory board, the Content Advisory Council (she doesn’t work for TikTok), said she has been impressed with TikTok’s proactiveness in addressing racism on the app.

“They’re really leading in terms of seeking out people who will push back against the technology when the technology is not doing right by Black people,” Nkonde said.

The apology and elevating Black creators

The issues of racial bias and content suppression of Black creators on TikTok reached a boiling point on May 19, when Black TikTok creators held a Blackout to uplift their content and raise awareness that their videos were underrepresented.

During the Blackout, users changed their profile pictures to the Black Lives Matter raised first. Black creators used specific hashtags like “#ImBlackMovement” and posted videos about their content and experiences on TikTok. In solidarity, some white creators agreed not to post content to help amplify their Black counterparts.

TikTok CEO Kevin Mayer, along with some of the app’s engineers, also held a video conference last month with around a dozen Black creators, including Jones, to learn more about their experiences.

“I do feel like they are making changes,” Jones said. Other Black creators said they’re noticing more equality on the app, too.

High school activist Deonna Blocker, 17, who goes by @Deesymone on the app, estimates that she now sees 70 percent Black creators on her “For You” page and 30 percent white creators. However, because every user’s “For You” page is different based on the content a user interacts with, it’s unclear whether any other user is being shown the same breakdown of content.

“I think they’re definitely doing a better job at presenting Black creators. Before … my [‘For You’ page] was very white, and I would very rarely see a Black creator,” Deonna said. “Once everything went down with George Floyd and even Juneteenth and the Blackouts … it went up significantly.” Deonna’s videos calling out racism and highlighting Blackouts have gotten thousands of views.

Improvement can be creator-specific: TikTok’s “For You” homepage feeds each user a unique stream of content. While some Black creators say they’re seeing changes — noticing more engagement and increases in followers — others say they believe they’re shadow banned on the app, or blocked from reaching the main TikTok feed without any kind of notification from TikTok.

Nkonde, the advisory council member, said the app has also told her it doesn’t engage in shadow banning. But she said that if shadow banning still occurs as a glitch in the system, it must be addressed.

Emily Barbour, 25, who is @emuhhhleebee on the app, said she feels as though she’s being gaslighted when she’s told that the app is working to highlight Black creators. Some videos Barbour has posted that she felt would typically get high levels of engagement have hardly made a blip on the radar of other TikTokers.

“It’s exhausting, because it’s just following along this pattern that’s been going on for decades, years, centuries, where Black people aren’t being heard and everybody’s pretending it’s not happening,” Barbour said.

Activism on the platform

Chambers, who created the viral song, had used her platform to convey a wealth of information, from linguistics to history to activism, long before this spring’s Black Lives Matter protests. But Chambers said that after the May Blackout and the June apology, she noticed that her account was starting to pick up traction. Her account has more than 400,000 followers.

Other TikTokers, like Jones, moved toward activism after Floyd’s death.

Jones said she shifted her TikTok’s focus to include education when she interacted with followers who told her they had changed their behavior after learning from her.

But a large following can be excessively demanding.

“When you’ve got 400,000 people who want to hear you and are expecting to hear from you, it can be exhausting,” Chambers said.

All of the creators who spoke to NBC News said they have experienced burnout at one point or another — especially those whose pages have been elevated and whose follower counts have skyrocketed.

“People assume because you’re willing to speak up about something, you’re now an ambassador to everybody else in your demographic, and it’s not true. … It does contribute a lot to the burnout, because I don’t know everything. Not one of us knows everything,” Barbour said.

Barbour said that for Black creators, sharing their trauma in the name of education can feel draining and that having to argue with followers about their experiences can lead them to want to quit altogether.

“It’s so unrealistic to assume because you like this Black creator and because they speak up about these things that they’re going to speak up about everything and give their opinions about everything,” she said. “It can’t work, especially considering this is an app and it’s something we’re not getting paid for.”

Frustration and burnout aren’t the only side effects Black creators experience when their content isn’t elevated and they’re not given credit for their work, said Richardson, the journalism professor.

“For some of these kids, they do want to have that level of clout that will enable them to do other things that they love,” she said. “And without that necessary audience, those eyeballs, without that metric in place to prove that they are an influencer, they’re denied the lucrative endorsements that maybe their white peers receive more regularly.”

An equal future for TikTok?

Jones said she believes a more equitable TikTok is coming, particularly after the meeting with other Black creators and TikTok executives last month.

“It’s a difficult issue, because it’s so much deeper than an algorithm,” Jones said. “It’s a society thing. It’s going to take a lot of work.”

TikTok executives told Jones that they planned to check in with the creators who were invited to the meeting after 90 days to discuss whether they’ve seen improvements in the app’s equity.

Jones said she’s optimistic that the future of TikTok is one in which Black creators are on a level playing field with their white counterparts.

“It will come in time. I don’t know what that timeline’s going to look like, but I’m very hopeful TikTok has the resources and brainpower on their team to make this happen,” she said.

Thu Jul 30 , 2020
With the fiery flash of a rocket launch, NASA’s Perseverance rover headed out today for what’s expected to be a decade-long campaign to store up and bring back Martian samples that may hold evidence of alien life. United Launch Alliance’s Atlas 5 rocket lifted off from Cape Canaveral Air Force […] 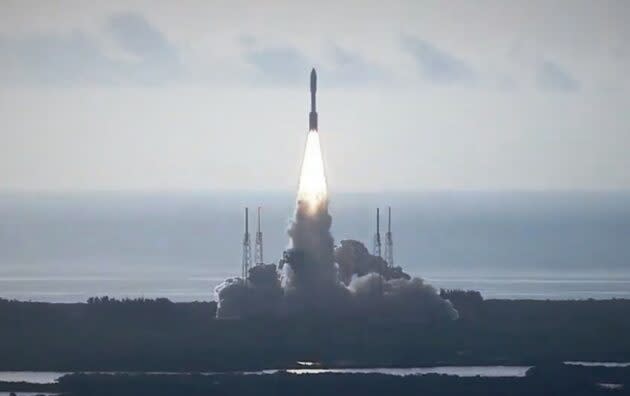