Together the two districts enroll about 825,000 students and are the largest in the country to announce such plans. In a joint statement, officials said ongoing research around the coronavirus remained “incomplete” and federal guidelines were “vague and contradictory.”

“One fact is clear: those countries that have managed to safely reopen schools have done so with declining infection rates and on-demand testing available. California has neither,” the districts said. “The skyrocketing infection rates of the past few weeks make it clear the pandemic is not under control.”

Cases of the virus have continued to rise in most states in the U.S. More than 61,000 new infections were announced Monday, the second-highest during any point in the pandemic, and hospitals in some states were warning of rapidly filling intensive care units.

At the same time, school officials have been struggling to figure out how to resume classes later this year with some adopting a similar online approach or hybrid models that will limit how many students can be on campus at a time.

Austin Beutner, the superintendent of Los Angeles Unified, emphasized the district’s decision was made to keep students and teachers safe as the new school year begins, saying “science was our guide and will continue to be.”

“There’s a public health imperative to keep schools from becoming a petri dish,” Beutner said Monday. “While the school year will begin without students at school facilities, our goal is to welcome students back to school as soon as it is safe and appropriate for us to do so.”

The start of the school year in California is five weeks away, and Beutner told the Los Angeles Times it was important to let families know about the decision early so they could prepare for the changes.

The moves come as the state’s governor, Gavin Newsom, announced a sweeping rollback of California’s reopening measures, ordering bars closed and restaurants and other businesses to shutter indoor operations.

“It’s incumbent upon all of us to recognize soberly that COVID-19 is not going away anytime soon, until there is a vaccine and/or an effective therapy,” Newsom said at a daily briefing Monday.

The districts’ decision to hold online-only classes prompted immediate condemnation from the White House. President Donald Trump has aggressively pushed for schools to completely reopen in the fall, threatening to cut funding to institutions that fail to do so.

The Centers for Disease Control and Prevention has continued to caution that full-sized, in-person classes pose the “highest risk” to students.

“Schools should be opened,” Trump said at the White House on Monday when asked about the moves in California. “There’s kids who want to go to school.  You’re losing a lot of lives by keeping things closed.”

He later continued: “We have to open the schools. We have to get them open. And I think there’s a lot of politics going along. I think they think they’ll do better if they can keep the schools closed in the election.”

Education Secretary Betsy DeVos has also touted the White House line, saying Sunday that “the go-to needs to be kids in school, in-person, in the classroom because we know for most kids, that’s the best environment for them.”

Tue Jul 14 , 2020
Getty St Andrews University has said it will work with police to investigate dozens of allegations of sexual assault or rape on campus. An Instagram account called St Andrews Survivors posted over 20 allegations about sexual misconduct at the university, with many claiming members of a fraternity at St Andrews […] 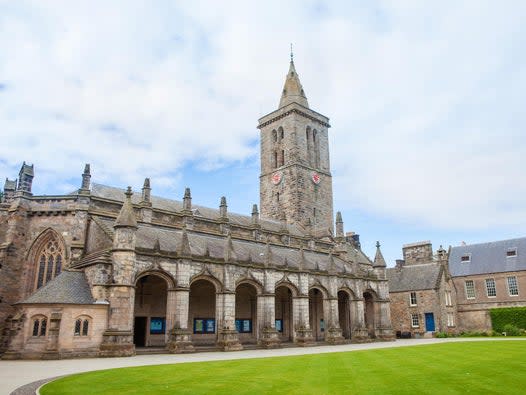