“Some days I’m running out of breath / Some days I’m running out of time,” he sings in a moist, R&B-schooled croon. It’s an understandable admission from a young striver who’s done a bit of everything in show business, from viral YouTube videos to major-label pop singles to a gig hosting the Radio Disney Music Awards, since he came to Los Angeles a decade ago determined to become a star.

What’s surprising about “Old AF” is that the song isn’t a throbbing trap cut or a whiny piano ballad but an exuberant gospel number complete with a choir repeatedly setting off that F-bomb behind Aiono.

“I was definitely nervous about asking them to sing it,” he recently recalled of the choir with a laugh. “But that’s me telling my truth, and what I’ve learned is that God would rather me be real than right.”

With its memories of paying his family’s rent and missing school dances in order to work, “Old AF” is the emotional centerpiece of Aiono’s proudly audacious new album, “The Gospel at 23,” on which this precociously experienced performer traces his bumpy journey through Hollywood (including episodes of substance abuse, depression and empty sex) against the backdrop of his challenged faith as a lifelong member of the Church of Jesus Christ of Latter-day Saints.

“I take Olympic now just to avoid driving past your house,” he sings, referring to the Mormon temple on Santa Monica Boulevard, in “Without You,” about feeling “too far out to turn back around.” In the rousing “These Emotions” he describes days spent hitting his vape pen and nights spent hitting up “every girl in my phone.”

Then there’s “The Medicine,” a stately praise song delivered by a damaged guy reclaiming his belief in God: “You can save me from myself before my wounds hurt someone else.”

The singer made “The Gospel at 23” with a studio team led by producer Billy Mann, an industry veteran known for his work with Pink and John Legend. The moving result is far more vivid than the handful of nondescript tunes Aiono released in 2017 and 2018, after his teenage success doing covers on YouTube got him signed briefly to Interscope Records. (Aiono put out “The Gospel at 23” last month on his own Become label.)

But at a moment when many view Kanye West’s religious awakening with skepticism, the album raises questions about a would-be pop star’s appropriation of a cherished African American tradition — and about how commercially viable such a move may turn out to be.

Aiono, whose mother is white and whose father is of Maori and Samoan descent, grew up in Phoenix, where he remembered having his mind blown around age 3 by a performance by Gladys Knight, the famous soul singer who converted to Mormonism in the late ’90s.

“Usually Mormon music is very reverent, but she was kind of the unruly star of Mormon music,” said Aiono, who went on to emulate Knight’s hybrid approach by singing a variety of material in church — “LDS songs, ‘Amazing Grace,’ songs by the Winans” — before discovering the likes of Legend and Robin Thicke. When Aiono was 14, his parents moved him and his three sisters to L.A.; in 2016, a video of him mashing up Drake’s “One Dance” and “Hasta el Amanecer” by reggaeton’s Nicky Jam took off online, eventually racking up more than 70 million views.

The voice was clearly there; so too the charisma (and clean-cut good looks) that would soon make him a Radio Disney heartthrob. Yet nothing about the slick, vaguely danceable pop songs that followed, including “Thinking About You” and “Work the Middle,” made Aiono stand out in a scene crowded with YouTube hopefuls and kids from singing contests like “American Idol” and “The Voice.”

“I remember sitting with Aaron Bay-Schuck,” then the president of A&R at Interscope, “and they put Alex in the room with the A-list Soho House songwriters of L.A.,” said Mann, who also manages Aiono’s career. “That can work sometimes. It can also create something where he becomes an interchangeable part.”

Aiono, who even in a Zoom window puts across the practiced equanimity of a well-seasoned media pro, characterized his Interscope years as a crucial phase in his journey as an artist. (Bay-Schuck, now CEO of Warner Records, “commented on my Instagram the other day,” Aiono was quick to point out. “So it’s all love.”)

Yet the singer allowed that the identity crisis — and his experimentation with the indulgences he’d been warned against as a church-going kid — left him without a clear sense of purpose.

“I was just following what other people said was success,” he recalled, which led to what he called “dark thoughts” about his future. Asked if he felt chewed up by the industry, he said he wouldn’t use that phrase.

“But the idea you have from movies and embellished documentaries about becoming a star overnight…,” he trailed off. “I’d say it’s been a consistent learning curve.”

For “The Gospel at 23,” Aiono said his goal was to combine his different experiences to tell a story as complicated as real life. One signpost was “Church,” a 2016 track by BJ the Chicago Kid in which the MC raps, “She say she wanna drink, do drugs and have sex tonight / But I got church in the morning.”

Yet unlike music by BJ or Chance the Rapper, to name another artist who’s brought religious themes into modern hip-hop, “The Gospel at 23’s” sound is willfully old-fashioned, built on a minimal foundation of piano, drums and choral background vocals. (The choir, directed in the studio by arranger Bill Jolly, wasn’t affiliated with a specific church, Mann said, which made “Old AF” an easier sell.) In “Loved People,” Aiono moves beyond his own narrative to ponder the troubled state of the world over a groove that reaches for the earthy resolve of a classic Staple Singers record.

Of course, the Staples inspired audiences in part through their activism in the fight for civil rights. Their music was inseparable from their hard-earned role as spiritual thought leaders, which obviously is not the case with Aiono, even if his embrace of gospel sounds reflects his upbringing in a religious environment.

The cover of “The Gospel at 23” depicts Aiono, arms outstretched in a messianic pose, leading a group of Black men and women dressed in choir robes — a risky image that tempts any listener exhausted by West’s various proclamations to wonder if another guy with millions of fans on social media is really the savior we need right now.

Aiono, whose turn to religious music follows Justin Bieber’s loose association with the evangelical Hillsong church, insists he’s not “asking anybody to be a follower. This is not the new religion,” he said. “Everybody has a gospel — your inner belief system. This is mine.” (Of West, whose public comments have grown especially erratic in the past few weeks, Aiono said, “I pray for Kanye, because I know that there is something that is not right.”)

Alisha Lola Jones, author of “Flaming? The Peculiar Theopolitics of Fire and Desire in Black Male Gospel Performance,” said it’s not so much Aiono’s relative outsider status that might prevent him from being taken seriously as a gospel artist; after all, as she pointed out, Thomas Dorsey started out as a blues musician before he wrote the indelible “Take My Hand, Precious Lord.”

But she’s doubtful that Aiono’s arrangements or his vocal chops will impress many in a form that prizes extreme technical ability.

“I don’t think his music is intended for us,” Jones said, meaning gospel aficionados. “I think it’s intended for those who want a little bit of righteous and ratchet,” a term that’s been used by the popular Christian rapper Lecrae.

Aiono said that after he finished “The Gospel at 23” — with its explicit language and its frank discussion of sex — he was less concerned with “pleasing strangers” than with “making sure my parents didn’t disown me.”

“I’m saying things they’ve never heard,” said the singer, who’s set to appear as an actor later this year in a Netflix family film,” produced by Ian Bryce of the hit “Transformers” franchise.

So what was his folks’ response?

“Oh, they’ve got my back,” Aiono said. He remembered seeing tears in his dad’s eyes the first time he played him the album. “And my mom, she’ll go to the grocery store now with my merch on.

“It’s a T-shirt with my face on it, and I’m standing right next to her.”

Wed Aug 5 , 2020
Congolese artist Chris Shongo paints a mural in Kinshasa. In our series of letters from African journalists, Kenyan Joseph Warungu looks at the acts of generosity helping ordinary people through desperately trying times. When Covid-19 hit Africa, the effects were devastating – but some people have been crushed more than […] 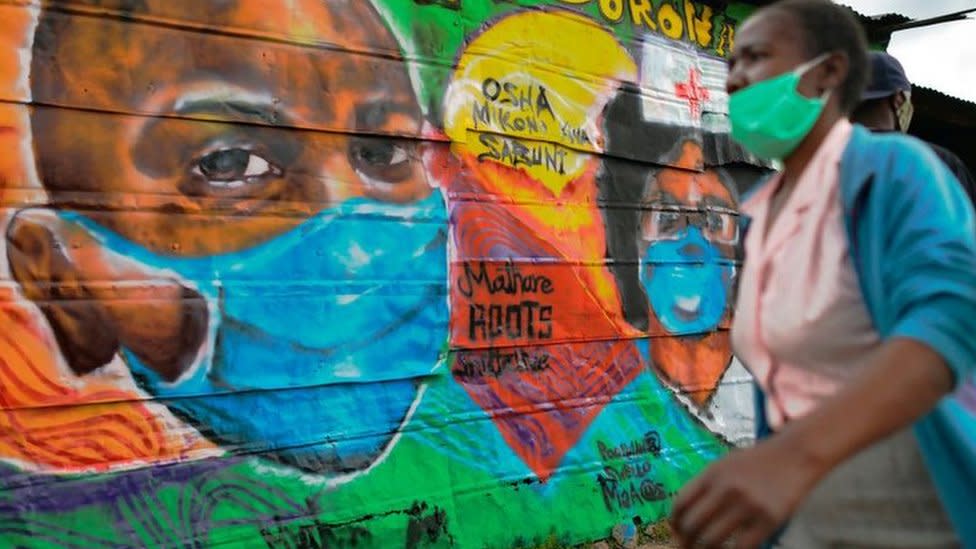