Click here to read the full article. July 28, 2020: Kellie Leonard, Nike Inc.’s chief diversity and inclusion officer for the past two years, has stepped down. Felicia Mayo, who joined Nike a year ago from Tesla, will lead a newly formed team as chief talent, diversity and culture officer, […]

July 28, 2020: Kellie Leonard, Nike Inc.’s chief diversity and inclusion officer for the past two years, has stepped down. Felicia Mayo, who joined Nike a year ago from Tesla, will lead a newly formed team as chief talent, diversity and culture officer, CEO John Donahoe announced in an internal memo Monday. In addition, noted Donahoe, Julie Fuller, VP of talent and org effectiveness, has accepted an opportunity outside the company. The two departures, suggested Nike’s chief, have precipitated an opportunity for the brand to create a cultural shift, specifically combining its Talent and D&I functions.

July 28, 2020: Canada Goose acquired Baffin in November 2018 to make inroads in footwear, and today the Toronto-based company made more strides in the category. Adam Meek has been tapped as its GM of footwear and accessories, a new role at Canada Goose. In the role, Meek is tasked with leading the ongoing development and execution of its global footwear strategy and oversee its accessories collection. In the 20 years of Meek’s career prior to this new role, he has held leadership positions with top players in the market including Sperry, Nike and Lacoste. His most recent position was SVP of product at Sperry. Meek will report to Canada Goose EVP of product Woody Blackford.

July 27, 2020: Timberland has named Drieke Leenknegt as its VP of global marketing. In the role, Timberland said Leenknegt — who joined the company in June — will be tasked with leading its global marketing team to bring its brand purpose to life throughout all consumer touch points. She will also work with the brand’s marketing leaders in all regions to drive consumer activations — especially in the digital space. Leenknegt has more than 20 years of global communications, product, marketing and general management experience. Prior to Timberland, she worked for athletic market giant Nike, most recently as its global VP of influencer marketing and collaborations. Timberland said Leenknegt is succeeding Argu Secilmis, who has taken on a new role with Timberland as its VP of global apparel.

July 23, 2020: Maison Margiela has named Gianfranco Gianangeli CEO, FN sister publication WWD reported today. Prior to joining the Paris-based house, Gianangeli had been working for his family’s knitwear manufacturer in Italy; he has previously held executive posts at Prada and Bottega Veneta. Gianangeli reports to Ubaldo Minelli, the CEO of umbrella group OTB, which encompasses Viktor & Rolf, Marni and Diesel in addition to Margiela.

July 22, 2020: Nike announced that it has appointed Amy Montagne as VP/GM of men’s, Whitney Malkiel as VP/GM of women’s and McCallester Dowers as VP/GM of kids — all of whom will report to Michael Spillane, who becomes president of consumer creation. The sportswear giant has also named new executives in its geographic segments of Europe, Middle East and Africa (EMEA), as well as the Asia-Pacific and Latin America (APLA). Carl Grebert will take on the role of VP/GM of the EMEA, succeeding Bert Hoyt, who will retire this year after 22 years with the company. Sarah Mensah will then take on Grebert’s post as VP/GM of the APLA. What’s more, Jordan Brand president Craig Williams and Converse Inc. president and CEO G. Scott Uzzell will join Nike’s executive leadership team, reporting to CEO John Donahoe.

July 22, 2020: Rent the Runway announced two new executive appointments, naming Ellen Shultz chief people officer and Larry Steinberg chief technology officer. Shultz comes from the New York Times, where she was the company’s most senior human resources leader as well as a member of its executive committee; she begins at Rent the Runway on Sept. 8, 2020. Steinberg joined the Rent the Runway team in May as a consultant and has transitioned to full-time this month.

July 21, 2020: Effective July 31, Tailored Brands EVP, CFO and treasurer Jack Calandra will depart the company. For now, his duties will be divided between CEO Dinesh Lathi as well as AlixPartners managing director Holly Etlin, who has been appointed to the newly created role of restructuring officer. Etlin has been working with the Tailored Brands executive team and board of directors since March.

July 21, 2020: Tapestry, Inc. chairman and CEO Jide Zeitlin has resigned. Coinciding with Zeitlin’s departure, the company has announced a series of interim appointments. CFO Joanne Crevoiserat has been named interim Tapestry CEO. President, chief administrative officer and company secretary Todd Kahn will serve as interim CEO and brand president of Coach. Global head of investor relations and corporate communications Andrea Shaw Resnick has been appointed interim CFO, and lead independent director Susan Kropf has been made chair of the board of directors. The company will commence a search for a permanent CEO, looking at internal and external candidates.

July 20, 2020: Dollar Tree has promoted Michael Witynski to the role of president and CEO, replacing Gary Philbin, who is entering retirement. The new executive chief joined the company in 2010 as SVP of stores. Seven years later, he rose to the post of president and COO of Dollar Tree stores, and in 2019, he became the enterprise president, leading the merchandising, store operations and supply chain functions of both the Dollar Tree and Family Dollar brands. Philbin — who joined Dollar Tree in 2001 and climbed to the CEO position in 2017 — will remain a member of the board of directors through September 23 to help facilitate the transition.

July 20, 2020: FN sister magazine WWD has reported the departure of Bali Barret, artistic director of the women’s product universe at Hermès. According to WWD, Barret has submitted her resignation letter and plans to depart from the house this fall. She joined Hermès in 2003 as artistic director of its silk department and was appointed to her current role, which gives her purview over all women’s departments — including ready-to-wear, shoes and leather goods — in 2009.

July 15, 2020: NFL star Larry Fitzgerald Jr. has been appointed to the Dick’s Sporting Goods board of directors, the retailer announced today. An 11-time Pro Bowl select, Fitzgerald joined the sports matter advisory board of The Dick’s Sporting Goods Foundation in 2018. He also owns a minority ownership stake in the Phoenix Suns. I’ve long admired Dick’s Sporting Goods, and over the years have had the opportunity to see up close what they stand for and who they are as a company,” said Fitzgerald in a release. “We share a passion for sports, supporting young people and serving our communities. “

July 14, 2020: Wolverine World Wide has named Barry McGeough VP of advanced concepts and innovation. He will report to Angelo Ng, chief merchant officer and a member of Wolverine World Wide’s executive leadership team. In McGeough’s new role, he will prioritize driving digital transformation and product innovation across the company’s portfolio of 12 brands. Prior to joining the company, he founded and lead PVH Corporation’s global innovation division for brands including Calvin Klein and Tommy Hilfiger to building footwear and technical gear for The North Face.

July 13, 2020: Matthew Mirchin, strategic advisor of global revenue at Under Armour, is retiring after 15 years at the brand. The executive has held a variety of roles at the company through the years, including president of North America and EVP of global marketing. His last day with Under Armour will be March 1, 2021.

July 8, 2020: Snipes USA announced the appointment of Jim Bojko as president. Prior to assuming the role, Bojko was the retailer’s chief transformation officer where he designed its entry to the U.S., which included the acquisitions of KicksUSA and Mr. Alan’s. Also, Snipes said in a statement that Bojko was instrumental in launching its first Snipes 2.0 store concept in the U.S. on Flatbush Avenue in Brooklyn, NY this month. He will report to CEO Sven Voth.

July 7, 2020: Adrian Ward-Rees is set to return to Burberry in a new role: SVP and head of ready-to-wear. The executive formerly served as director of menswear at the luxury fashion brand. Following his exit in 2011, he joined Ben Sherman Group as SVP of merchandising and commercial director. He also held posts at Lane Crawford, where he took on the Hong Kong-based role of menswear general merchandise manager and fashion director, and was the SVP and managing director of Dior Homme for the past four years. Ward-Rees’ appointment at Burberry begins on July 20, and he will report directly to CEO Marco Gobbetti.

July 1, 2020: Genesco president and CEO Mimi Vaughn has added another title to her name. The company announced that the top exec has been given the additional position of chair of the board of directors, effective immediately. She succeeds Robert Dennis, who served in the role over the past decade and retired on June 30. (Dennis also held the positions of president and CEO from 2008 to February 2020.) The move marks the final step in a transition plan that Genesco launched in 2018.

July 1, 2020: Effective immediately, Yoox Net-a-Porter Group chairman and CEO Federico Marchetti is joining Giorgio Armani SpA as an independent, nonexecutive director of the board. Marchetti is the first non-Armani family member to be part of the board. In March, Marchetti announced plans to exit the YNAP CEO post but to stay in his role as chairman. However, the COVID-19 outbreak put YNAP’s search for a successor temporarily on hold.

Tue Jul 28 , 2020
With schools closed since mid-March, some parents working from home and others busier than ever as essential workers, the pandemic has been a complicated time for childcare. While family situations vary immensely, here are a few pieces of wisdom from Sacramento parents that might help others in pursuit of some […] 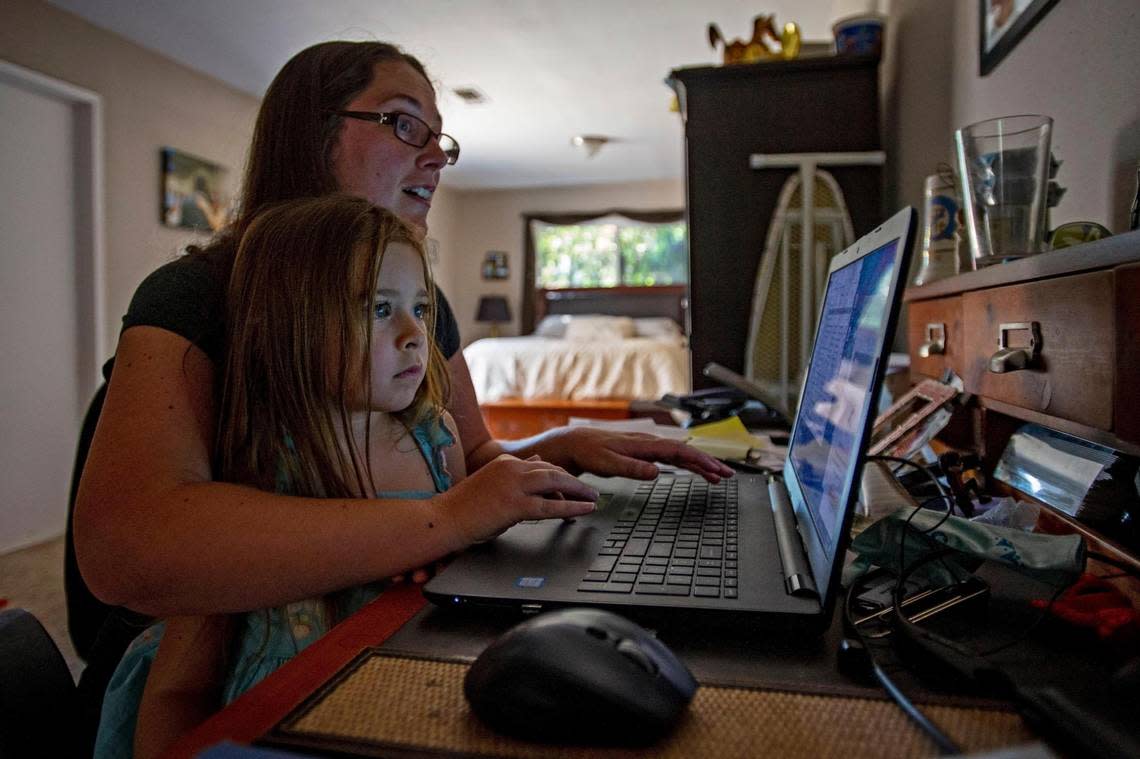