It’s a ticket to a potentially lucrative career as a lawyer — and a grueling, dreaded rite of passage that can defeat even the most promising young legal mind.

Now, with the COVID-19 pandemic raging, there’s a chance thousands of recent law school graduates could become lawyers in California without having to take the bar exam.

Hundreds of recent graduates, along with the deans of some of California’s most prestigious law schools, are asking the California Supreme Court to cancel the upcoming exam. Instead of having to pass the exam, the graduates would automatically be licensed in California under a system used in other states and known as “diploma privilege.”

The issue is coming to a boil. The exam, initially set for late July, has been postponed to early September by the State Bar of California, which administers the tests. The State Bar’s backup plan is to hold the test online in October. About 9,500 students are teed up to take the exam, said State Bar spokeswoman Teresa Ruano.

But now the law school deans and recent graduates are pressing the Supreme Court to get rid of the test for this year. A group of deans made their case in a Zoom hearing before the court last week, and hundreds of graduates had their say in a Zoom meeting with the justices Tuesday. While the State Bar runs the exam, the court has final say.

When the court will make its decision isn’t clear, but recent graduates say they need an answer quickly. Many have landed jobs with law firms, but the offers are contingent on them passing the exam. The postponement, and the uncertainty about whether the exam will be held this fall, is complicating their efforts to launch their careers.

“The students are basically sitting in limbo,” said Kevin Johnson, dean of the UC Davis School of Law. “It’s no fault of the students who are all prepared to take the exam.”

Graduates who are pushing for diploma privilege insist that they aren’t simply looking to skip a difficult test. Given the risks of a pandemic that’s gotten worse in recent weeks, they feel being excused from the exam is only fair.

“We’re not looking for an easy way out, we’re looking for a just resolution,” said Meghan Shiner, who graduated this spring from the McGeorge School of Law in Sacramento. “Diploma privilege is really the only equitable option right now.”

Three states — Washington, Oregon and Utah — have substituted diploma privilege for the bar exam this year, and several more are considering it. Wisconsin did away with the bar exam requirement years ago.

California has never used diploma privilege before, but “we’re really in this unprecedented moment,” said Michael Hunter Schwartz, the dean at McGeorge and an advocate of diploma privilege. As he sees it, the education his students receive “is sufficient to make them ethical and competent.”

While it’s still making plans for administering the exam this fall, either in person or online, the State Bar said it hasn’t taken a position on the deans’ proposal. “The State Bar defers to the Supreme Court on the policy questions,” Ruano said.

Advocates for diploma privilege say an in-person exam would create too many health risks. The exam, which takes two days to complete, would be “a super-spreader event,” said Sacramento resident Beth Patel, who would be among the thousands taking the test.

An online exam would create problems of its own, the deans say, particularly for low-income graduates who might have poor internet access and difficulty finding child care. “There really is no way to have an online bar exam in a way that’s fair to our poorer students,” Schwartz said.

The coronavirus pandemic has intensified a longstanding debate about the value of the bar exam. “I would make the case for diploma privilege even without the COVID pandemic,” said Johnson, the dean at UC Davis.

California’s bar exam, given twice a year, is considered among the hardest in the nation. Just 1,128 graduates passed the February exam, out of 4,200 who took it. While the pass rate is higher for the second exam of the year, when thousands of new graduates take it, critics say the test is flawed and hurts minority graduates.

The exam “stands out as a demonstrated barrier to diversifying the profession.” Schwartz said.

Patel, who recently graduated from Northeastern University law school in Boston and moved to Sacramento, said poorer graduates struggle with the exam because of cost. Most graduates have to shell out thousands for test-prep courses and set aside weeks to get ready.

“If you’re wealthy and can take months off to study, you can take the exam,” she said.

The deans’ proposal wouldn’t apply to all graduates. Instead, it would be limited to graduates of law schools accredited by the American Bar Association, said Erwin Chemerinsky, dean of UC Berkeley’s law school and a frequent contributor to The Sacramento Bee’s opinion pages.

That would exclude graduates of non-accredited schools such as Lincoln Law School in Sacramento. Chemerinsky said the deans who are petitioning the Supreme Court for diploma privilege aren’t necessarily opposed to extending the idea to the other schools.

If the court rejects the diploma privilege idea, Chemerinsky and the other deans are recommending a “provisional” license that would allow the graduates to practice law until they can take the bar exam, likely sometime next year.

Some welcome graduates without exam

At least one big Sacramento law firm said it has no problem hiring graduates who haven’t taken the exam.

Shapiro, however, said diploma privilege could create difficulties in the legal profession.

The deans’ proposal includes “guardrails” to ensure that, among other things, the graduates get additional mentoring from their employers, said

But Shapiro said he isn’t sure whether a new lawyer who signs on with a small firm would get the proper supervision.

Shapiro added that some clients might object to being represented by a lawyer who hasn’t passed the exam. “Are these people going to have a black mark on their resumes forever?” he said.

Even some of the graduates acknowledge they’re worried about the implications of skipping the exam. “To work that hard to earn that license, and to have any sort of taint on it would be concerning,” said Shiner, who was head of the Student Bar Association at McGeorge. “We don’t know what employers are going to think about this.”

But Johnson believes there’s no stigma. “Most clients and most employers look at the quality of the legal work, not whether or not you passed an exam,” the UC Davis dean said.

Thu Jul 9 , 2020
A Wednesday night protest in central Merced at the intersection of West Olive Avenue and R Street took a tense turn after two groups exchanged words in the area of the Chevron gas station. Police said no injuries were reported and no arrests were made during the face-off between the […] 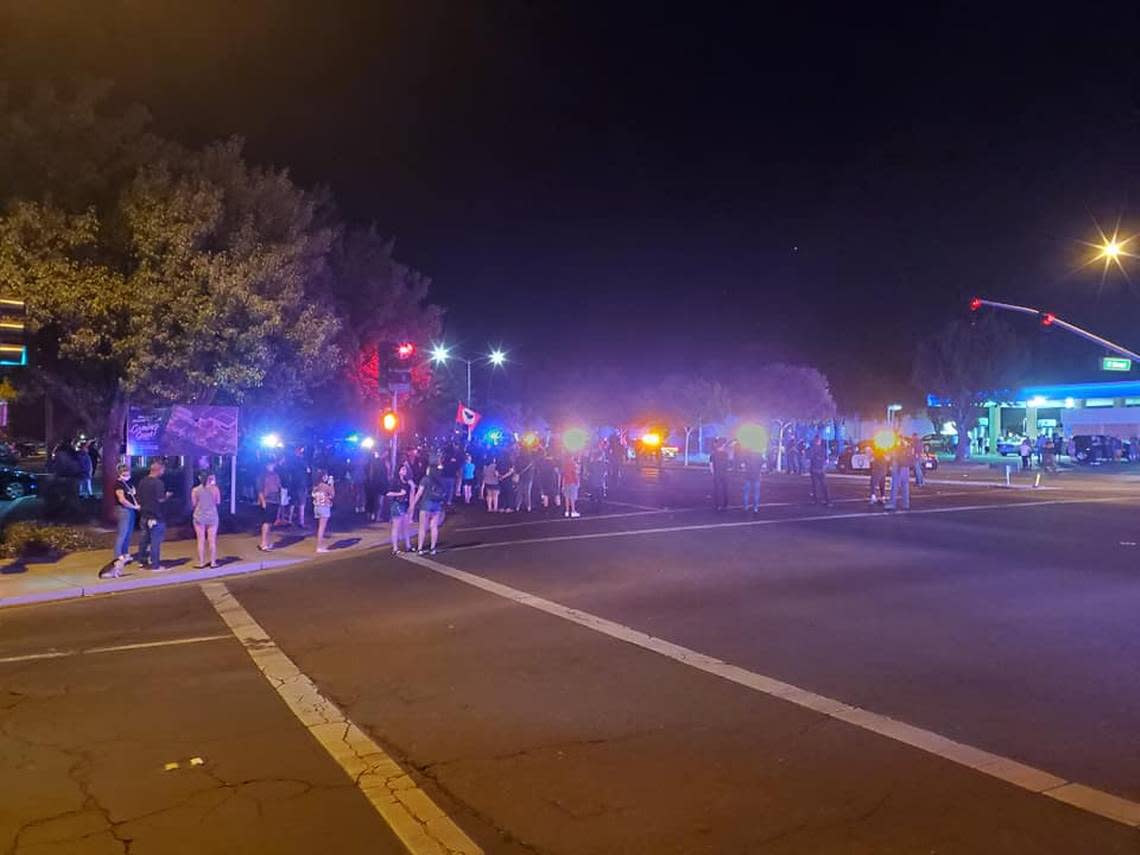