The nitpicking started when Trevor Lawrence took a sack on third down for a 16-yard loss and a three-and-out on Clemson’s first possession Saturday night against Wake Forest.

The junior quarterback left little to overscrutinize after that. He backed his billing as the best player in college football as the No. 1 Tigers (1-0, 1-0 ACC) flexed in a 37-13 victory, a result that wasn’t exactly shocking considering they were 33.5-point favorites coming in.

Lawrence (22-of-28 passing, 351 yards, three total touchdowns) also backed up what he did off the field in the offseason, when he established himself as a leading voice in the push to play amid the COVID-19 pandemic.

BENDER: Can Notre Dame be a worthy challenger to Clemson in ACC?

It was Lawrence, who threw five interceptions in his first three starts last season, who drove home the point about his on-field standing by showing no early-season rust. On the Tigers’ second possession, he hit Amari Rodgers for a 36-yard completion on a corner route. His game was nearly flawless from there.

Lawrence hit 18 of 23 passes for 261 yards and a touchdown in the first half. He also scored on two short runs in the red zone. Running back Travis Etienne gained 94 of his 102 rushing yards in the first half and scored in the second half.

Nitpick Lawrence if you want. He had minus-24 rushing yards because of sacks. Clemson settled for field goals a few times and didn’t cover. Lawrence might not win the Heisman because he won’t play enough in the fourth quarter of games.

The last point is the only one that isn’t a stretch. Lawrence hit eight different receivers in the first half and four different receivers for gains of 20 yards or more. He did all that without Justyn Ross, who won’t play this season after undergoing spinal fusion surgery.

Why is this significant? After all, it was just another run-of-the-mill ACC opponent in Wake Forest (0-1, 0-1), right?

The bottom line is Lawrence didn’t have to play another down of college football. He could have opted out to prepare for the likelihood of being the No. 1 pick in the 2021 NFL Draft. He’s a national champion, has played in two College Football Playoff championship games and is 26-1 as a starter. He really has nothing left to prove.

College football can play that card all day. Lawrence is setting the tone to validate the 2020 college football season. He validates the ACC race, which now includes one-time member Notre Dame and upstart North Carolina.

He validates the Heisman Trophy race — a race in which he has yet to make the trip to New York as a finalist. John Elway, Peyton Manning and Andrew Luck — those once-in-a-generation college QB-turned-No. 1 picks Lawrence often gets compared to — never won the award. Big 12 stat-stuffers such as Oklahoma’s Spencer Rattler or Texas’ Sam Ehlinger might get in the way, but Lawrence made an impactful first statement.

He validates the College Football Playoff race, too. The SEC will take its first lap in two weeks. The Big Ten might even jump in this October. Maybe Alabama (if it wins the SEC) or Ohio State (if the Big Ten reverses course) gets a rematch after losing to the Tigers the last two seasons in the CFP. Maybe Lawrence does not get back to the championship game, which would be the biggest nitpick of all.

It’s worth watching, right? College football still needs several factors to work in its favor — especially with COVID-19 — but it does not hurt to have its biggest star making the case to play, on and off the field, and shining in the prime-time spotlight.

There is always a reason to watch college football.

There just isn’t a bigger reason than Lawrence right now.

Tue Sep 15 , 2020
“ ‘“It’s not something I take for granted. It’s why I love the game so much. I’m honored and I’m really excited to be able to lead this team out there on Sunday.”’ Ryan Fitzpatrick Fitzpatrick probably will never hear his name in the conversation for the Pro Football Hall […] 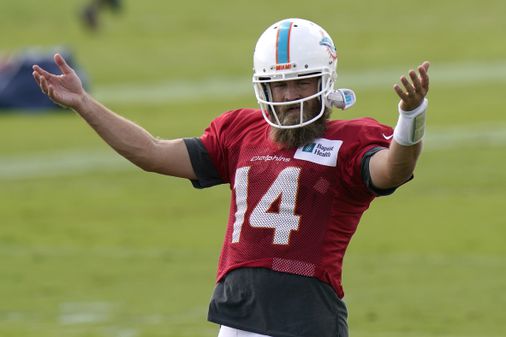