The people running college football owe the players an answer. With the 2020 season on the brink and the careers of the athletes in flux, there’s a simple question that no coach, administrator or commissioner can answer right now: “What’s next?”

All signs over the weekend continued to point to a great unwinding of the 2020 college football season. At the same time, a unified and unprecedented movement began on Sunday night – led by Clemson’s Trevor Lawrence and linked by the #WeWantToPlay hashtag – to potentially give players a seat at the table as the decisions are made on the future of the sport. By late Sunday, there had been buy-in from players in all major conferences and the hope to “ultimately create a College Football Players Association.”

This unfolded in the wake of Big Ten presidents meeting for consecutive days to discuss the fate of the season, and sources told Yahoo Sports there’s a uniform expectation that the league will announce a cancellation of fall sports this week. It’s considered an inevitability that most major conferences will follow – the SEC has the best odds of holding out – although the process remains unclear.

Here’s what scares coaches around the country and has college football players “on edge,” as multiple coaches described it this weekend. If a coach has to stand up in front of their team this week and tell them that the fall season is canceled, he’s not in position to answer any of the obvious follow-up questions.

PLAYER: Coach, are we playing in the spring?

COACH: I’m not sure about that, there’s been no plans.

PLAYER: What happens to seniors who miss their final season? Will all players get an extra year of eligibility?

COACH: I’m not sure about that, either.

PLAYER: Will we be practicing this fall? Or working out this fall?

COACH: No one has made any decisions on that.

While there’s been constant speculation about the dominoes falling in college football, there’s been far too little time spent on what happens when they topple. A sport that’s operated on a plan primarily based on hope for the past five months hasn’t spent nearly enough brainpower on a backup plan. Will rosters be expanded? Is it safe to play in the spring and again in the fall? Has anyone dug in on the potential health impacts on players cramming two seasons into one calendar year?

“Has anyone even thought about the spring?” a Group of Five coach said on Sunday night. “Or are we just guessing? To do that to these kids just isn’t right. If we shut it down. We need to say, ‘Here’s the plan.’ If we can’t play, we need to tell them, ‘Here’s what we’re going to do.’”

Lawrence, a group of Ohio State players and countless others have said they want to play. The hashtag that flew around the internet on Sunday picked up more traction via Lawrence’s tweets late in the evening and by midnight, athletes from all five conferences had banded together to harness the power of their voice.

“I’d argue for slowing down a little bit here,” said a Power Five athletic director on Sunday. “I’d rather see a decision – don’t play, play in the spring or play now. I don’t think we have the information to play in the spring, to give it the careful consideration we should. We should have done that three months ago.”

Yet again, in college football, the players end up as the suckers, stuck in the middle between the efforts to resuscitate the billion-dollar college sports industry and the trillion-dollar higher-education industry.

These are the same players who endured strict testing protocols, restrictive quarantines and, most nobly, isolating themselves from the social part of the college experience.

A half-dozen coaches told Yahoo Sports over the weekend that there’s a yearning for answers from their teams. Pushing players through a training camp without football on the other end is just cruel. Make no mistake, the players want to play. Badly. And that yearning came through in the relentless online outcry on Sunday night.

If they don’t play, they deserve to know from the NCAA how this impacts their scholarship, what options seniors have and whether a player who redshirts can extend his career. “It’s the No. 1 question in college football,” a Power 5 coach said late Sunday. “Do you have eligibility answers?”

Players can’t keep being “yo-yo’d” around, to use a Power Five AD’s term. They’ve had the goal line moved on them enough. It’s up to the leaders in college sports to gather themselves and build a clear plan. And now, there’s momentum for players to join them.

“You can tell they are holding in all this anxiety and doubt and fear,” a Power Five coach said on Sunday. “I hate to sound dramatic. Every time you talk about it, especially when there’s good news, you can see and sense a shift in mood. The uncertainty has them balled up inside. As it would for most humans. No one doesn’t want to know what their livelihood has in store. There comes a point where we’re doing all this to win football games. If there’s no games, we don’t want to do this.”

That’s why one of the biggest abdications of responsibility has been the near-complete failure to put together a coherent and sensible alternative season in the spring. Or explore the option deep enough to decide in the near future that it can’t happen.

With all those associate ADs and commissioner underlings floating through the college sports space, couldn’t a bit of their brainpower and time have been siphoned off to create an alternative model for football in the spring.

Right now, the only league that’s publicly expressed any kind of potential coherent plan for the spring is the ACC. Notre Dame coach Brian Kelly noted to The Athletic that Wake Forest coach Dave Clawson put together a plan for the ACC. “Dave Clawson was asked to put together a model, and I was able to see it and it looks really good,” Kelly told The Athletic in July. “It makes sense to me. I think it’s very doable.”

Privately, commissioners and athletic directors have summed up a spring season as a last resort. But the last resort is quickly becoming viable, and there’s little sense what it could look like. Do you play eight games? Could there be a College Football Playoff? What will happen to the combine, Senior Bowl and NFL draft?

There were some coaches and administrators advocating for the spring for months. And there’s a galling feeling among them that myopic thinking has prevented, at the least, a path that requires deep exploration.

“Rather than prepare for every scenario [such as the spring model], as any efficient, well-managed organization would, we collectively buried our heads in the sands of hopes and prayers,” said a high ranking official at a Power Five school. “Our reaction to the obvious deterioration of our country’s response to this virus was to solve problems by shortening seasons and shifting to conference-only models. It was all performative.

“College athletics is the only multibillion-dollar business in the world with no leadership structure or decision-making apparatus, and it’s been catastrophically exposed. I’m embarrassed to have been part of this exercise in failed leadership.”

Now it’s the players searching for answers. One prominent trainer, Erik Kaloyanides of Athletic Evolution in Woburn, Massachusetts, summed up the calls he’s getting from his college athletes this way: “They’re saying, ‘What do I do?’ It’s all over the map. They love football and want to play the game. They’re looking for guidance.”

That their coaches can’t give them answers isn’t the fault of the coaches. They’re looking for guidance as well. As plans have begun to disintegrate around the country, there’s an absence of backup plans. That led to what’s bubbled up online on Sunday. After the emotional rollercoaster of the past few months, players deserve specific answers to a simple question: “What’s next?”

And they may just end up being a bigger part in providing the answers.

Mon Aug 10 , 2020
DEREK R. HENKLE The fear in Wisconsin was clear.  The coronavirus pandemic was still relatively new in early April as the Wisconsin governor’s late attempt to delay the fast-approaching primary election was thwarted by a GOP court challenge. And even with a crucial state supreme court seat on the line, […] 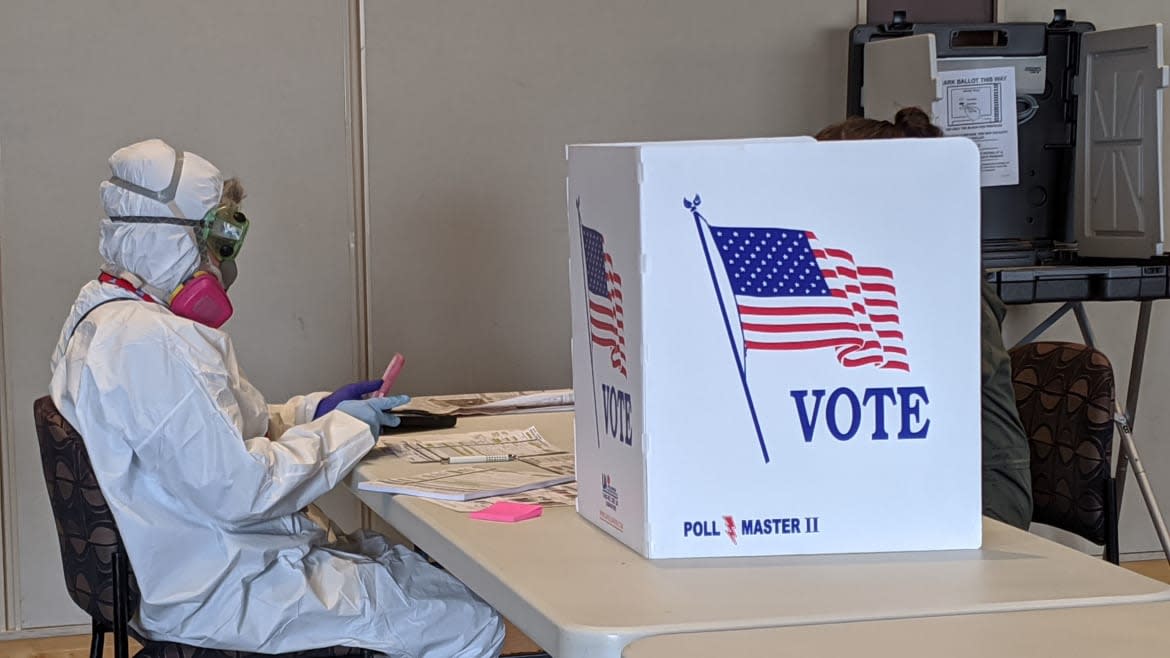