When the Pac-12 CEO group decided to have a college football season, set to begin on Nov. 6/7, a lot of the chatter quickly turned to whether or not the conference could potentially have a team make the College Football Playoff.

While the schedule has yet to be released, it’s expected that the Pac-12 will play six conference games and then a conference title game, giving the conference champion a total of seven games. Now how those seven games would compare to somebody from the Big Ten, SEC, ACC or Big 12, all of whom will have at least 10 games played, remains to be seen.

That’s why Pac-12 commissioner Larry Scott pitched the idea to the college football playoff committee about expanding the current format from four teams to eight for this upcoming season.

Unfortunately that idea was shot down and the CFP will stay at four teams for this upcoming season.

“They decided that doing that now would be such a significant change, and come with so many challenges, especially given the timing with the season already underway, that they concluded that the best outcome would be to make no changes in the format,” CFP executive director Bill Hancock told ESPN. “They will continue to discuss the future, which is just good, responsible business practice, although I must say that dealing with COVID has become everyone’s focus now.”

This isn’t the first time the committee has discussed the current format, as it’s something they do annually to figure out what is the best way moving forward. However, this is the first time a Power 5 commissioner has publicly asked for an expansion, potentially setting the stage for future changes.

“Whether it’s six or eight, at some point in time it’s going to happen,” Stanford coach David Shaw said on Wednesday. “We all know it; we all believe it. We’re just going to do it very, very slowly and methodically, but it’s the only thing that makes sense.”

The College Football Playoff began in 2014, and since then Pac-12 has had the worst showing of any Power conference. They’ve only sent two teams to the playoff (Oregon and Washington) and have a 1-2 record — the Ducks took down Florida State in the 2014 Rose Bowl before being blasted by Ohio State in the national championship game.

“In light of the pandemic and the varied schedules and reduced number of games, including no nonconference games for most teams, the committee will have to evaluate, I felt it was our responsibility and important to consider an expanded playoff that would include more teams and automatic qualifiers who are conference champions this year,” Scott told ESPN.

With no expansion coming, it means that the Pac-12 is once again at a disadvantage — and it has nobody to blame but itself for the poor management by Scott and the conference CEO’s in regards to playing football in the fall.

Want to share opinions or ask questions? We want to hear them! Making a profile is free and it only takes ~1 minute to set up. Also, be sure to like us on social media for future coverage:

Mon Oct 5 , 2020
Nurburgring 24 Hours winner Nick Yelloly described the inclement weather that caused the race to be red-flagged for nine hours on Saturday evening as “the worst conditions I have experienced”. The BMW factory driver joined ROWE Racing team-mates Alexander Sims and Nicky Catsburg to score BMW’s 20th success in the […] 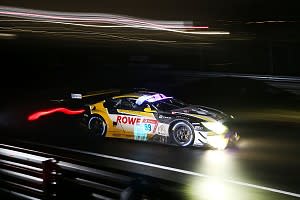