The University of North Carolina at Chapel Hill is ending in-person instruction for undergrads just a week after reopening, after dozens of students living in dorms and a fraternity house tested positive for coronavirus.

UNC is hardly the only institution experiencing an uptick in infections within days of students returning to campus. Bethel College in North Newton, Kan., reported a cluster of 46 confirmed cases of Covid-19 through mandatory entry testing. Officials said 482 people have been tested and many still await their results. At Oklahoma State University, a sorority house is under quarantine after reporting 23 cases.

The University of Notre Dame is seeing a spike in coronavirus cases, too. More than a quarter of its 58 confirmed cases rolled in over the weekend. University officials said the the vast majority of new cases could be “traced to a single off-campus gathering.”

Only a fraction of colleges have started their fall semester. As August and September progress and more institutions resume teaching, the academic term could see a wave of similar outbreaks and sharp pivots to online learning if students don’t adhere to rules and guidelines about masks and social distancing.

President Donald Trump, lawmakers and state governing boards have pressured universities to reopen for in-person lessons. Trump threatened colleges tax-exempt status and his administration changed the rules about international students’ coming to the U.S. if their colleges offered online-only courses.

At UNC, the chancellor and provost did not have the “full freedom” to decide whether or not to reopen their campus because “the [Board of Governors] told system universities they had to reopen and that individual university chancellors could not make those decisions independently,” Barbara K. Rimer, dean of UNC Gillings School of Global Public Health, wrote Monday.

With the growing number of infections among students and reports of off-campus behavior showing “drinking, no masks or distancing and crowds,” Rimer said the university should return to remote instruction.

The semester began Aug. 10, and students moved in about one week earlier. In all, more than 500 UNC students are in isolation or being quarantined on or off campus.

“After only one week of campus operations, with growing numbers of clusters and insufficient control over the off-campus behavior of students (and others), it is time for an off-ramp,” Rimer said. “We have tried to make this work, but it is not working.”

Heading into the fall term, colleges across the country looking to open for at least part-time in-person instruction were cautiously optimistic. Campus leadership touted reopening plans that included entry tests, setting social distancing and mask-wearing guidelines, creating safe conduct pledges they ensured their students would honor, and lowering the typical packing together of students in dorms and dining halls by inviting back a limited number of students.

Even with fewer students on campus, the Centers for Disease Control and Prevention has compared shared living in college, including dorms, to nursing or assisted living homes. Both living situations are ripe for person-to-person transmission of the virus and could lead to similar patterns of spread.

Starting Wednesday, all undergraduate in-person instruction at UNC will shift to remote learning, Chancellor Kevin M. Guskiewicz and Provost Robert A. Blouin wrote in a joint message. “As much as we believe we have worked diligently to help create a healthy and safe campus living and learning environment, we believe the current data presents an untenable situation,” they wrote.

The in-person starts at some colleges went very much against what some local leaders wanted. Several said that while students may behave on campus, getting them to abide by strict social distancing guidelines off campus could be a challenge.

Before class resumed at UNC, Orange County’s Health Director Quintana Stewart had warned that if students moved back, Chapel Hill “could quickly become a hot spot for new cases.”

Stewart had recommended to Guskiewicz that classes be conducted entirely online for the first five weeks of the semester. Earlier this summer, UNC students had not been cooperative with the communicable disease investigation and control measures, Stewart said late last month.

UNC officials say they expect the majority of their undergraduate residential students will change their living plans for the fall and will be able to do so without penalties. The university will notify students with more information in coming days, but said those “who have hardships, such as lack of access to reliable internet access, international students or student-athletes will have the option to remain.”

At Oklahoma State University, officials told The Oklahoman that the outbreak in the sorority house was “expected.”

“When you bring back 20,000 students, there will invariably be more cases related to campus,” said Monica Roberts, OSU director of media relations. “We’ve prepared for this for five months and have protocols in place to manage the situation.”

After watching a surge in large gatherings and parties on social media, Charlottesville Mayor Nikuyah Walker called the University of Virginia’s plan to bring students back to campus a “recipe for disaster.”

The pushback prompted the university ended to delay undergraduate in-person instruction and residence hall move-in dates by two weeks — to try to avoid a situation like that of UNC.

He's looking for Kobe Bryant everywhere, in murals across L.A. and the world

Tue Aug 18 , 2020
Artist Thierry “Mr. Brainwash” Guetta, left, and Mike Asner, creator of the KobeMural website and Instagram account, stand in front of the mural Guetta created of Kobe Bryant and his daughter Gianna five days after they died. The photo was taken on Feb. 27; a month later, heavy rains destroyed […] 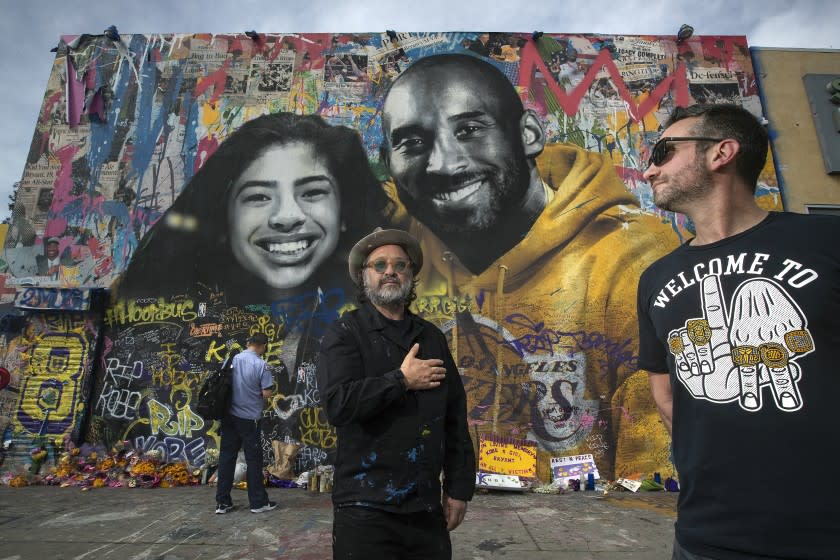