Democrats plunge Monday into the uncharted waters for the first of two weeks of virtual conventions to nominate their presidential candidates and grapple with ways to energize their supporters without the traditional crowds or pageantry.

Former Vice President Joe Biden will receive the Democratic mantle this week and Republicans will formally back President Donald Trump next week.

But for the first time ever, Democratic speeches will be delivered remotely, from across 50 states and seven territories, rather than in an arena filled with thousands of cheering supporters. A preview of the sound of silence arrived Wednesday, at Biden’s first joint appearance with Sen. Kamala Harris as his running mate in a high school gym in Wilmington, Delaware. The eerie quiet risks dampening the excitement for everyone from the party’s rising stars to the nominees as they introduce themselves to a national audience.

The bigger threat is viewers tuning out. To hold their interest, Democrats arranged for musical groups to perform between the customary speeches of political luminaries that this year include remarks by former President Barack Obama. Supporters submitted personal videos that will be played throughout the week. Rounding out the schedule will be presentations from voters offering perspectives from the farm, the factory floor or the town square.

“It’s not just the balloon drops. It’s very hard to give a rip-roaring acceptance speech online,” said Ross Baker, a political science professor at Rutgers University. “It’s a monumentally tough task to replicate that intensity in an online event. It’s much more like a business meeting or a conference.”

Biden and Harris enjoy the advantage of solid leads in a slew of polls even as the coronavirus pandemic has derailed standard shoe-leather campaigning of holding rallies, shaking hands and kissing babies.

The conventions offer a chance for Biden to introduce himself and Harris, the first Black woman on a major-party ticket, and for Trump to hit the reset button as voters awaken to the fall campaign. Both sides need to keep their supporters engaged amid the health crisis and the resulting worst economic collapse since the Great Depression.

“What the Democrats have to do is break through the cacophony and try to get people’s attention on the Democratic candidate, the platform and the goals and objectives,” said Karen Hult, a political science professor at Virginia Tech University. “That’s what’s so hard about it right now.”

Another distraction is the rival programming from Trump, who will campaign in four states during the week. He’ll visit his rival’s birthplace of Scranton, Pennsylvania, on Thursday, the same day Biden accepts the nomination. Trump and his administration could also make surprise announcements to draw the spotlight.

“The Democrats are going to have to be pretty agile here,” Hult said.

Conventions can serve to heal wounds between primary rivals and showcase party unity. Biden stumbled in early states among more than a dozen candidates before winning a string of victories with a foundation of support from people of color.

Former rivals who will speak include Sens. Amy Klobuchar of Minnesota and Sen. Elizabeth Warren of Massachusetts, and Pete Buttigieg, the former mayor of South Bend, Indiana.

Who’s speaking when?: DNC lineup headlined by the Obamas and Jill Biden as keynotes

The size of the tent will be staked Monday, when speakers range from one of the most progressive members the Senate, Bernie Sanders of Vermont, to a Republican, former Ohio Gov. John Kasich.

Sanders, Biden’s closest competitor during the primaries, buried the hatchet with a 110-page agreement on policies such as criminal justice and immigration. Kasich, who campaigned against Trump in the GOP primaries, said he agreed to speak for national unity after four exhausting years of dangerous division and chaos.

“There are going to have to be some attempts to heal the Bernie Sanders folks and to some extent the Warren folks, to make sure they get out (to vote), because obviously turnout is going to be a key thing for this race,” said Nick Kachiroubas, an associate teaching professor at DePaul University’s school of public service. “The question is whether those entrees will be successful. But the idea is to speak to those voters directly.”

Despite the long primary season – and Biden’s decades-long resume in Washington – voters are still eager to learn how he compares with Trump.

Many Trump voters who could turn against the president didn’t follow the Democratic primaries, according to Sarah Longwell, a GOP strategist and Trump critic who has been conducting focus groups of such women.

“When you talk to them, one of the things that’s sort of shocking, even though Joe Biden was the vice president for eight years, is just how undefined he is among this particular audience of people,” Longwell said. “What I hear more than anything else, is, `Well, you know, it’s time for me to really start doing my research.’”

But don’t expect too many details. National polls have shown Biden as much as 11 points ahead of Trump, according to tracking groups FiveThirtyEight.com and RealClearPolitics.com. Patrick Egan, a political science professor at New York University, said the ticket risks losing votes if the candidate commits to too many specifics.

“Your first rule is to do no harm,” Egan said. “Their best move is to present themselves as a competent, trustworthy team as well as portraying the Trump team as incompetent, especially at handling the coronarivus.”

Harris, a senator from California who was previously state attorney general and San Francisco prosecutor, dropped out of the presidential race before the first primary votes and is even less well known.

Longwell said Biden and Harris have “a lot of room” to define themselves over the next 2½ months.

“We’ve been in an incredibly fluid environment where people’s realities changed dramatically in the last six months,” Longwell said.

Trump seemed to sense the opportunity, too. He criticized Biden for campaigning from his basement and hiding from press questions. And Trump criticized Harris on a variety of subjects including policing.

“She folded up very badly in the primaries,” Trump told Wisconsin supporters Wednesday during a telephone rally.

The lack of applause

Joel Benenson, a pollster who was a chief strategist for Democratic candidate Hillary Clinton’s 2016 campaign, said generating excitement at the convention could be difficult without large crowds. He compared it to watching Major League Baseball playing games in empty ballparks.

The campaign is organizing watch parties in 50 states hosted by elected officials and celebrities. For example, Buttigieg will be hosting for Iowa and former Obama aide Valerie Jarrett will join television star Connie Britton to host New Hampshire.

Musical groups will bridge gaps between speakers. Common, Billie Eilish, Jennifer Hudson, John Legend and Prince Royce are among the groups scheduled to perform. Stephanie Cutter, the convention program executive, said the event “will look and feel very different than past conventions.”

“It will truly be a convention across America, and these incredible artists will help us tell the story of where we are as a country today under Donald Trump’s failed leadership, and the promise of what we can and should be with Joe Biden as president,” Cutter said.

Convention organizers spent two months collecting nearly 1,000 videos from delegates and other people that will play during the four nights.

To personalize the party’s message, the convention will feature voters talking about their priorities. Cutter said the aim is to have more Americans participate than ever before and to ensure that Americans see themselves reflected in the speakers. The voters include:

Voters are highly engaged in politics this year, according to a Pew Research Center poll released Thursday. The survey found 83% of registered voters say it really matters who wins the presidency, up from 74% in 2016, and regardless of the respondent’s party. Interest is the highest in decades, according to the center.

Conventions have been a tradition for both parties to choose their nominees since the 1830s. But as with this year, they hold little suspense because the last time a nominee wasn’t selected on the first ballot was Democrat Adlai Stevenson in 1952.

“It’s like watching a Harlem Globetrotters game and wondering who’s going to win,” said Robert Dion, associate professor of political science at the University of Evansville.

But conventions used to be rewards to party activists, offering a trip and a spectacle and an opportunity to meet big names in the party, said Baker of Rutgers. Not this year.

Beyond the formalities of choosing the nominee and agreeing to a platform, conventions offer several days of national television coverage for candidates to reach beyond the party faithful to undecided voters. Besides the prime-time speeches, conventions offer a megaphone to dozens of elected officials who will become the party’s next leaders. Potential Cabinet officials can audition.

James Zogby, president of the Arab American Institute and a Sanders supporter during the primaries, said this year’s convention gives Biden’s campaign an opportunity to mend frayed feelings among activists who were divided in the primaries.

“After speeches and the videos, you end up falling in love,” Zogby said. “The enthusiasm issue is real. While the ‘beat Trump’ thing goes so far – and clearly there are Biden enthusiasts – there are a whole lot of other people out there who still need to feel ginned up.”

Rather than surrender the spotlight to the opposing party, Trump will campaign in four states during the Democratic convention. Besides Scranton, Trump will barnstorm Mankato, Minn., and Oshkosh, Wis., on Monday to talk about civic unrest and jobs, and Yuma, Ariz., on Tuesday to talk about immigration.

“I’ll be there very soon,” Trump told Wisconsin supporters Wednesday during a telephone rally. “With your help we’ll defeat Joe Biden and the radical left Democrats.”

Baker said Trump is skilled at upstaging his competition and “getting attention when he wants it.

“It’ll be more than a distraction,” Baker said. “It’ll be more of a rival event. People will watch because they’re going to want to see this.”

Trump’s administration could also make policy announcements, such as when Environmental Protection Agency Administrator Andrew Wheeler rolled back Obama-era regulations on methane with a Pittsburgh announcement.

Political experts said a wild card in the race is whether Trump will be able to use his bully pulpit with constant news coverage to more effectively combat Biden’s lead in the polls. Otherwise Biden might be able to sit on his lead.

“We’re looking at a campaign that is kind of frozen in place and the question is: Can Trump use his presidential position to somehow turn that around,” Egan said.

Campaigns and political experts will be watching television and online viewership levels. One key factor will be which messages or videos get traction on social media.

Voter registration deadlines for each state

Mon Aug 17 , 2020
Election Day is quickly approaching and more than 235 million Americans will be eligible to vote, according to an estimate by Shonel Sen of the University of Virginia’s Demographics Research Group. Combine that with a historic voter turnout in the 2018 midterms and a global pandemic, the 2020 presidential election […] 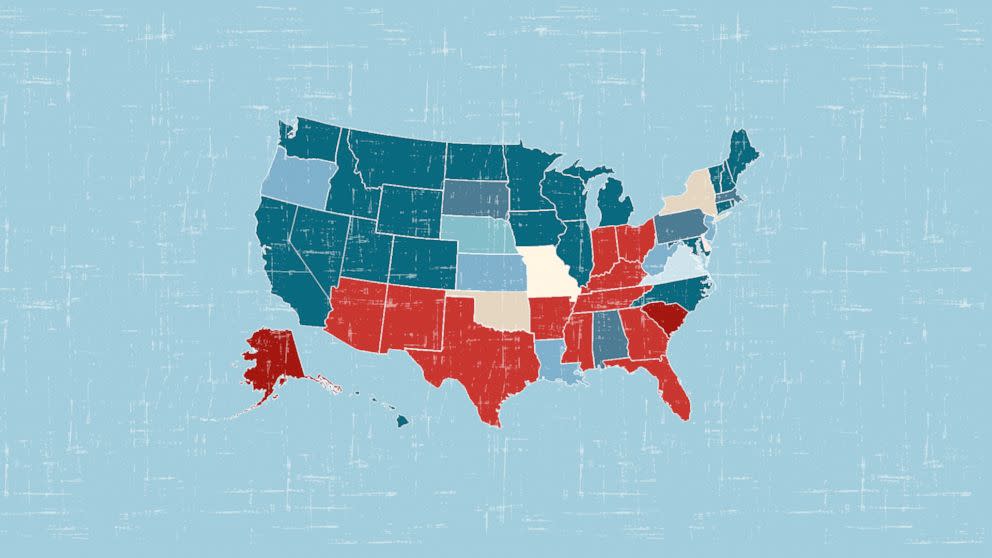