We might be entering the last days of public education in America. The United States, which led the world in expanding access to public education to boys and girls in the 1800s, is poised to become the first rich nation to abandon that commitment as longstanding political efforts to undermine public schools meet the existential threat posed by the coronavirus. As privileged parents determine what to do if schools are closed or online this fall, their individual choices could, in the aggregate, presage a shift away from public education and back to the market-based private education that predated it.

Public schools have been under threat for decades, as leaders in both parties pushed for school choice, charters and vouchers. That effort has gained renewed steam under the Trump administration. Even before the pandemic, Secretary of Education Betsy DeVos made providing public funding for families seeking to opt out of the public system a priority. But the pandemic offers her an opportunity to impose disruptive change. As public schools struggle to determine whether they can safely reopen and take on new expenses associated both with moving online and preparing their campuses for safe access, the Department of Education under DeVos has sought to channel emergency funds to private schools. South Carolina’s Republican Gov. Henry McMaster also hopes to use federal emergency funds to encourage parents to abandon public schools.

Rise of alternatives to public schools

These decisions by federal and state leaders are being made at a moment when parents are in an impossible situation. Because President Donald Trump ignored the virus and bypassed government scientists, the United States, unlike other wealthy nations, has lost control over the pandemic and is heading into fall with cases rising. Public schools have not been offered sufficient guidance nor funding to open safely. And in the context of a pandemic, many parents are wary about sending their kids to school in any case. Moreover, given that, despite heroic efforts by our nation’s educators, the quality of online education last spring left much to be desired, it’s not clear whether parents will send their kids to public schools online either.

For privileged parents, this means thinking about alternatives for the fall. Some are considering homeschooling. Others are forming private “pods” or “microschools” with neighbors and friends to share responsibilities and curricula. And others might choose private schools, which because they are tuition-driven and do not have the same problems of scale, may be open.

As parents opt out, could we see eroding support for public education? Based on my research as a historian of American education, I fear so. The reason is simple. In a country that has long been hostile to big government, public schools succeeded because almost every family was a stakeholder.

At the time of the American Revolution, education was not considered a public good. Parents were responsible for educating their own children. But, many Revolutionary-era leaders argued, a democracy requires all citizens to be educated, and this requires providing tax support for new public schools.

Americans then were skeptical. Many were unwilling to pay taxes to educate other families’ children. Tax collectors sometimes faced physical threats when they went out to collect school taxes! Although American leaders — Thomas Jefferson among them — spoke eloquently about the need to equalize access to education, their words were not enough. It was not until a critical mass of Americans started sending their kids to the new public schools that schooling really took off. As more parents sent their kids to public schools, others wanted in. And over time, the bulk of families in a community had a reason to pay taxes for public schools: Their children or grandchildren attended. In short, public support for public schooling was forged through the schools themselves.

Necessities for public school to succeed

Advocates of public schools knew that they would only be successful if most parents were invested in them. Public schools turn each parent’s interest in their own child into a collective investment in other people’s children. Horace Mann, secretary to the Massachusetts Board of Education in the 1830s and one of the 19th century’s leading advocates of public education, worried that if privileged parents did not opt in, then public schools would never succeed. If privileged families “turn away from the Common Schools” and send their children to a “private school,” then, Mann argued, poorer children would end up with a second-class education.

Similarly, an 1822 report for the Kentucky legislature concluded that public schools will only succeed if the majority of children attended. If wealthy families opted out, public education would be considered charity instead of a public good.

We are at a moment of reckoning. The last time public schools were closed was when Southern states sought to avoid integration. The goal then was to sustain racial inequality. Even if today the aim is not racist, in a system already rife with economic and racial inequality, if families with resources invest more in themselves rather than share time and money in common institutions, the quality of public education for less privileged Americans, many of whom are racial minorities, will deteriorate.

Pandemic and schools: How much GDP and employment are worth how many teachers and students? Do we matter?

In short, as families are forced to make tough choices in the context of America’s botched response to the pandemic, individual choices might collectively increase inequality and undermine Americans’ commitment to public education itself.

This article originally appeared on USA TODAY: COVID-19 and public schooling: the threat to public education

Fri Jul 31 , 2020
The Twin Cities are bursting with political yard signs. They’re not campaign signs — those are tellingly few. I’ve seen more faded blue holdovers from 2016 than support for presumptive Democratic nominee Joe Biden or President Trump. No, the signs dotting my neighborhood and absolutely swarming the next neighborhood over […] 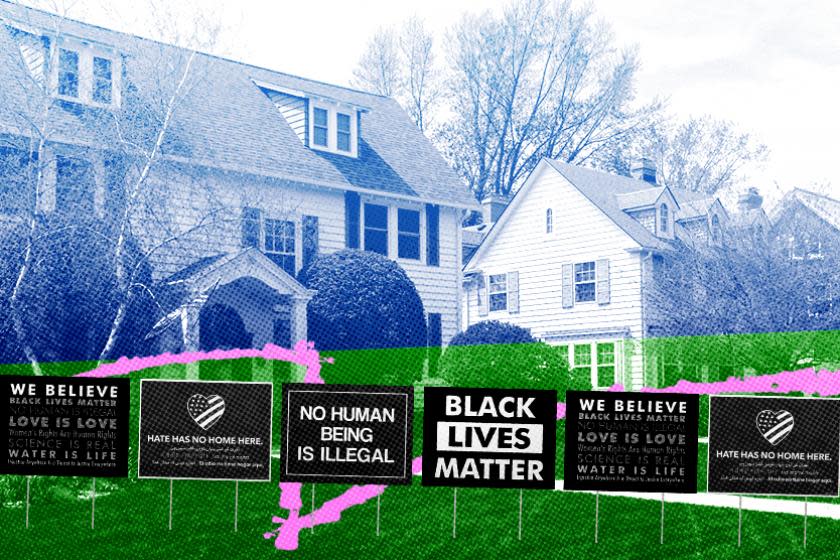