Jeffree Star returned to the internet after a four-week hiatus with a 10-minute apology video. He vaguely apologized to James Charles for all the drama over the past year and claimed he was taking accountability for his actions and “reflecting” on his own behavior.

The video, called “Doing What’s Right,” was Star’s chance to face up to many of the accusations, both past and present, that have been flying around social media over the last few weeks. But while he did say he wanted to take responsibility and put it all behind him, there are plenty of things he didn’t mention at all.

Here’s everything Star didn’t address in the video.

After Tati Westbrook posted her “Bye Sister” video in May last year, where she called out James Charles for advertising a rival vitamin brand to her own and accused him of behaving inappropriately around straight men, Star inserted himself into the drama with a string of tweets. He called Charles a “danger to society” and a “predator” in the thread he has now deleted, which helped catalyze Charles’ loss of 3 million subscribers.

Star promised the world that he would provide “receipts” for Charles’ apparent predatory behavior, but subsequently posted a video called “Never Doing This Again.” where he said he was removing himself from the drama. What followed was a confusing few months of contradictory behavior from Star — publicly congratulating Charles on his success one minute, then further perpetuating rumors about him the next.

In April, nearly a full year after Star said he was done with the beauty war, he appeared on Keemstar and FaZe Banks’ podcast and claimed to have a voice note from an alleged sexual victim of Charles that he said proved he had reason to send the tweets in the first place. It was later revealed he never ended up playing the voice note to them, so its existence remains in question.

In his latest video, Star once again distanced himself from the drama he helped create by saying he would not be showing texts or voice notes to “expose” anyone. He then shifted the blame again, and said he let people “gas me up” behind the scenes.

“Did I not just simply call James Charles and ask questions myself? 100%,” he said. “And that is my fault. I would like to personally apologize to James Charles for the words I’ve said and my actions.”

Commentary and beauty YouTuber Smokey Glow said in a response video that if Star was truly sorry to Charles, he would have cleared his name.

2. Taking any responsibility for his problematic past

While Charles was offered an apology, Star has never directly addressed two female Black creators, Jackie Aina and MakeupShayla, who claim he made derogatory, racist, and threatening statements towards them.

Over the years Star has been filmed hurling racist slurs and being violent on several occasions. One video even seems to show Star and a friend belittling and abusing a vulnerable intoxicated man as he tries to leave their house. Some of this he apologized for in a video in 2017, but he didn’t go into any specifics.

Like this current installment, many said the apology was empty and simply not good enough. Tea channel Def Noodles, for example, called the whole thing a “publicity stunt” and highlighted how Star’s words probably can’t be trusted.

Smokey Glow called Star’s video a “non-apology” because all it did was “allow his stans to continue to support him.” He said just enough for them to be able to say he’d addressed the drama, she said, and could now continue behaving exactly how he did before.

Adam McIntyre went through every statement Star made in the video, emphasizing how he was trying to make himself out to be the victim.

“Stop trying to pen a narrative that you’re this innocent person,” he said.

Star further diverted viewers away from his own scandals by scolding them for not focusing enough on the issues going on in the world, like the coronavirus pandemic, Black Lives Matter movement, and the deaths of Black trans women.

“Breonna Taylor still has no justice. Black trans women are being murdered every day and the news is silent. Elijah McClain has no justice, and the countless other people who are murdered every single day while everyone just goes about their business while it’s happening,” he said. “It’s really time to reflect on the big picture.”

Creators such as D’Angelo Wallace criticized Star for using the deaths of Black people as a distraction from his controversies.

“This isn’t performative activism, this is hijack-tivism,” Wallace wrote on Twitter.

Star didn’t mention Tati Westbrook in the entire video, but did allude to the things she said in her explosive video, released in June, that dredged up the past. Westbrook said in her video that Star and Shane Dawson “used, coerced, and manipulated” her into kickstarting Dramageddon 2.0 and Charles’ demise in May 2019 as a means of publicity for their upcoming docu-series and eyeshadow palette.

She also said the whole community should prepare themselves for what Star would release when he started having to answer for his own behavior. Star denied this, in a roundabout way, in his video.

“Today, once again, I will not be exposing anyone,” he said. “For everyone saying ‘Jeffree’s going to be coming with the receipts and we all need to get ready to forgive,’ that is the opposite of who I am.”

He did not mention the Conspiracy series with Dawson or any of Westbrook’s claims directly.

Star briefly spoke about Shane Dawson’s recent fall from being the “King of YouTube” by saying he is one of his best friends, but left out much of the detail that people on social media have taken issue with.

Smiling, Star called Dawson “genuine, amazing, and selfless,” and “one of the most kind people that I have ever met in my entire world.”

“I know that Shane would put his family and friends before himself in a flash,” he said. “Now did Shane and I get caught up in the drama and do some dumb s—? Of course we did.”

Again, Star didn’t confirm or deny what Westbrook said about feeding her lies about Charles.

He also didn’t mention the controversy surrounding Dawson, whose name is now associated with sexualizing children and animals, dressing in blackface, and using racial slurs.

“That is my best friend, and I was truly shocked that people thought I was going to distance myself from him or that my silence was anything but support,” he said. “I know the amazing person that he is today and you don’t abandon your friends.”

5. The end of his business with Morphe

Morphe, the makeup brand which Star has worked closely with for many years, recently cut ties with him. First Dawson’s Conspiracy line was removed from the online store, then the company announced it would “cease all commercial activity related to Jeffree Star and affiliated products.”

Star did not mention this, but focused attention on his success instead. He said what he achieved, growing into a beauty mogul after working in a mall once upon a time, would inspire others.

“Jeffree Star Cosmetics will never be slowing down,” he said. “And I am so excited for everything that’s coming for the rest of 2020.”

His apologies are wearing thin with followers

Star is skilled at saying all the right things, and most likely has a whole team of publicists behind him helping him through whatever dramas he finds himself in. But it seems his words are wearing thin, particularly for people of color in the YouTube community.

Kahlen Barry, who has called out racism in the influencer industry, reacted to the video in a livestream. He said people shouldn’t even bother watching the video at all, because it didn’t feel like an apology.

“Don’t even give this man a click,” he said. “It just felt very passive-aggressive. He didn’t want to be saying s—. He was sitting there like he didn’t even want to address any of the things he was talking about, and he was being forced to. He just had this, ‘I have somewhere else to be’ kind of vibe.”

A common theme in all of Star’s apologies over the years is how he says he is closing a chapter on the past and he’s learned and grown from his mistakes. But some critics say he’s never actually changed.

As Cherita Gaskin from the YouTube channel Cherita Explains It All said in a video, Star has been starting new chapters periodically throughout his entire career. His latest video is him doing “the exact same thing he’s been doing for years,” she said.

She said Star gets involved in drama, stirs it up, and makes accusations, only to remove himself again under the guise of being mature and above it all, before the cycle repeats again.

“That chapter is starting to look a little ‘Groundhog Day’-ish,” Gaskin said. “Because it’s the same chapter over and over again.”

Jeffree Star is staying quiet while Shane Dawson’s career lies in tatters. Here’s why celebrities like him seem uncancelable.

Jeffree Star addressed the Tati Westbrook ‘situation,’ James Charles, and the drama about him and Shane Dawson in a new video

Trisha Paytas says Jeffree Star apologized for insulting her weight and past drug use, and has been ‘working on himself’

People Are Obsessed with Coconut Aminos, But Here's What You Need to Know Before You Try It

Mon Jul 20 , 2020
Photo credit: sveta_zarzamora – Getty Images From Good Housekeeping While perusing various recipes, particularly Paleo-inspired ones, you may have come across an ingredient that’s unfamiliar to you: coconut aminos. And if you hit Google to find out more about it, an array of health claims about the ingredient often pop […] 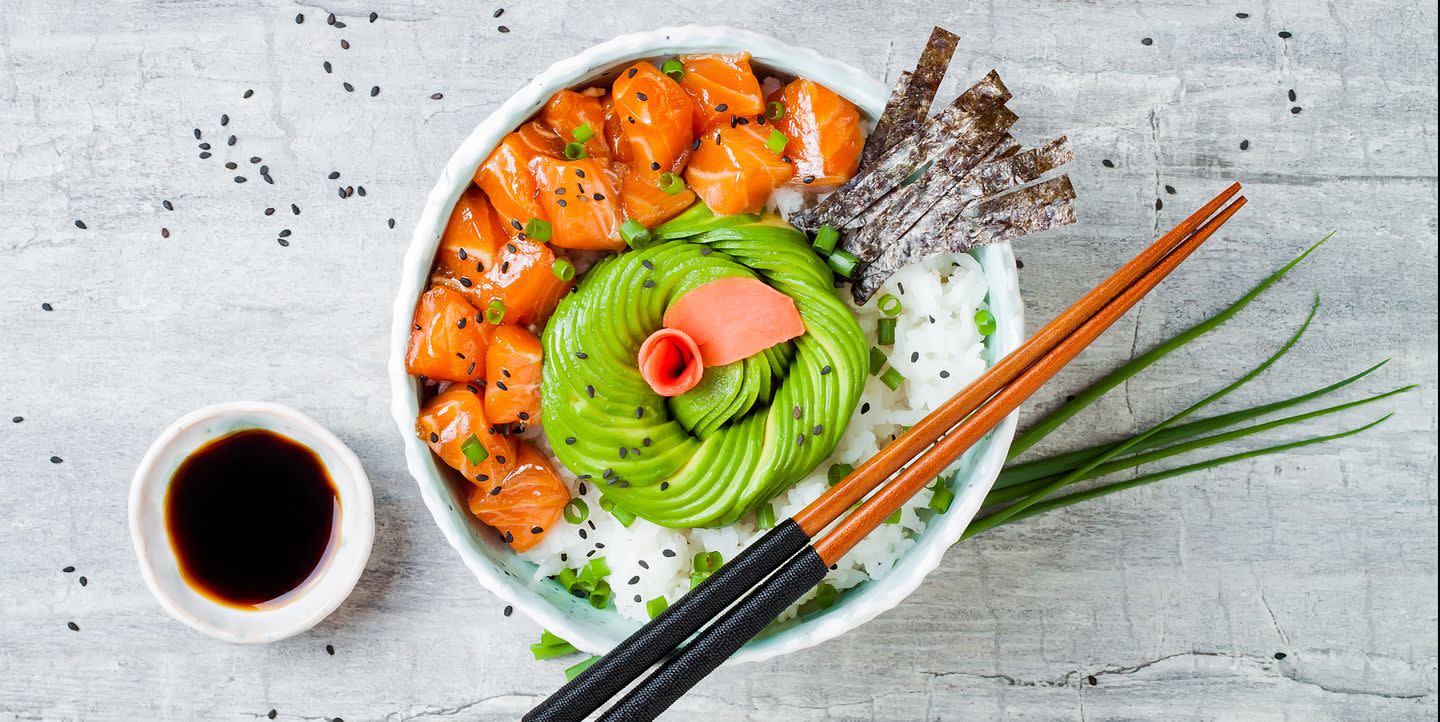