“We are trying to get him acclimated as fast as we can, give him a helmet and let’s roll,” Hafley said on September 8, according to the Boston Herald.

Bequette did not record any statistics, but the TV commentators for the game apparently mentioned during the second quarter that Bequette was doing a good job in anchoring the defensive front.

The Eagles allowed a first-quarter touchdown on a 49-yard run but shut out Duke the rest of the way. It was a positive sign for a defense that yielded 32.2 points per game in 2019.

Bequette, a sixth-year senior, left Cal when it was announced on August 11 that the Pac-12 was canceling fall football. He said on August 25 that he was transferring to Boston College as a graduate transfer. Bequette has NFL aspirations so it was important for him to play this fall and get as much exposure as possible.

“I just kind of waited until the official release of the information that the season got canceled and then immediately started getting on top of it and looking into schools,” he told A.J. Black of Sports Illustrated’s BC Bulletin two days before the opener.

He joined the Boston College team two weeks later, and noted this week that the transition was relatively easy, even though he was adjusting to playing on the interior in a four-man defensive front after primarily playing defensive end in a three-man front with the Golden Bears. He started 38 consecutive games over the past three seasons at Cal. Because of personnel issues, Bequette was forced to play nose tackle for a good part of Cal’s 2019 season,  and his versatility paid dividends.

Bequette said he worked hard to learn the playbook, according to BC Bulletin, and added tht it has been a “quick transition.”

“I am definitely happy to be here and excited that the coaching staff gave me the opportunity to come here,” he said.

Now it appears the Pac-12 will have a fall football season afterall. University presidents are expected to vote on that proposal on Thursday. However, the Pac-12 season may be limited to seven or eight games, while Boston College will play 11 games, including games against Notre Dame and Clemson.

Mon Sep 28 , 2020
Alex Lynn hailed his class victory at the Le Mans 24 Hours as the “biggest win of my career” after triumphing in the GTE Pro division for Aston Martin. The British driver set the fastest GT lap of the race as the #97 Aston Martin Vantage he shared with regular […] 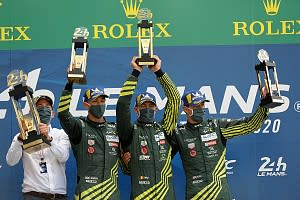