The U.S. death toll from COVID-19 was nearing 150,000 on Tuesday as several states set weekly fatality records and Florida reported a one-day record for deaths. Further confirming the Sunshine State’s troubles with the coronavirus, the Miami Marlins’ season was temporarily suspended after 15 players and two staff members tested positive.

Florida’s 186 deaths raised the toll there to more than 6,000. Gov. Ron DeSantis, who three weeks ago ordered in-classroom learning when schools reopen next month, has eased his rhetoric in recent days. He now wants schools to ensure parents have “the choice between in-person and distance learning” for their kids.

📰 What we’re reading: Another coronavirus stimulus check: How much would they be? When would I get it? Who qualifies? What we know about the next round of payments.

Marlins season on hold because of outbreak

A handful of days into the truncated baseball season, its viability has come into serious question with an outbreak of COVID-19 cases among the Miami Marlins, who have had 15 players and two staff members test positive.

Major League Baseball has paused the Marlins’ season, which almost certainly means they won’t play their scheduled 60 games, and possibly neither will their upcoming opponents.

The Marlins’ outbreak had already resulted in a handful of postponements Monday and Tuesday: two Miami home games against the Baltimore Orioles and a pair of Phillies-New York Yankees games in Philadelphia, where the Marlins had played a three-game weekend series. Now, the Marlins will have up to seven games to make up.

“People should understand that they are more likely to die from cancer that has progressed as they sit at home to prevent COVID-19 … than they are to die from COVID-19,” said Dr. Therese Bevers, medical director of the University of Texas MD Anderson Cancer Center.

Twitter has removed a post that President Donald Trump had retweeted in which a doctor proclaims, without evidence, that “there is a cure” for the coronavirus. The president’s re-tweet “was in violation of our COVID-19 misinformation policy,” Twitter said in statement. The social media giant also restricted the account of Donald Trump Jr. after removing a post in which doctors touted the alleged benefits of “hydroxychloroquine” in fighting the coronavirus. The president’s son was blocked from tweeting for 12 hours.

The record numbers of new weekly coronavirus cases that Arizona, Florida, Texas and California experienced a month ago are now playing out as record numbers of deaths in those states. Texas’ death toll continues to rise, and the state had a record 1,607 deaths in the week ending Monday, a USA TODAY analysis of Johns Hopkins University data shows.

That translates into a Texan dying every 6 minutes, 16 seconds, and no sign of any relief. Texas’ weekly death toll is more than seven times its worst week through April.

Arizona’s is now more than five times worse than its worst week in the spring, while Florida is well over double. California is about 24% above its worst spring death toll.

Some families will pay several hundred dollars a month to hire teachers and tutors for small-group learning “pods” while awaiting an end to the pandemic that has brought upheaval to their kids’ schools. The parents hope to create a stable structure for their kids amid fears that a second COVID-19 wave could create more school shutdowns. Pods also allow their children to socialize with a small group of peers and provide parents with more stable work schedules.

Shauna Hill, 42, a single parent of twin 7-year-olds in Burlington, Vermont, is in discussions with other parents about setting up a pod. The goal, she said, “really is to build a little village.”

Major League Baseball is concerned about the Miami Marlins’ recent outbreak of COVID-19 cases, but it isn’t yet enough to consider shutting down the season, MLB commissioner Rob Manfred said Monday. Appearing on MLB Network, Manfred said officials knew there would be positive tests at some point. Rosters were expanded to allow for such issues, he said.

Dr. Anthony Fauci, speaking Tuesday on ABC’s “Good Morning America,” warned that the outbreak could threaten the abbreviated season that began just a few days ago.

“I don’t believe they need to stop, but we just need to follow this and see what happens with other teams on a day-by-day basis,” Fauci said.

The head of critical care who worked on the front lines of the coronavirus pandemic at a Baltimore hospital has died from the virus he helped fight. Dr. Joseph Costa, chief of the Division of Critical Care at Mercy Medical Center, died at age 56. The Washington Post and The Baltimore Sun reported Costa died Saturday from COVID-19, the disease caused by the novel coronavirus.

“I have profound admiration and the deepest respect for Joe as a clinician, colleague and friend,” hospital President and CEO Dr. David Maine said in a statement. “Mercy Medical Center and the Mercy family richly benefitted from Joe’s wisdom, compassion, insight and thought, ethical approach to his work and the families he served.”

Dr. Deborah Birx, a White House adviser who is among the top coronavirus officials in the nation, said Monday that Tennessee should close bars and limit indoor restaurant dining to prevent a looming escalation of the outbreak among young people. Moments later, Gov. Bill Lee said he “appreciates their recommendations” but won’t follow them or give county mayors the authority to do so locally.

Tennessee on Monday broke records for new coronavirus cases and deaths over a seven-day period, a USA TODAY analysis of Johns Hopkins data shows. New cases for the week leaped to 16,735 – more than five times the worst week seen in the spring. And deaths rose to 131, more than double the worst week of the spring.

Head of China CDC gets injected with experimental vaccine

The head of the Chinese Center for Disease Control and Prevention says he has been injected with an experimental coronavirus vaccine in an attempt to persuade the public to follow suit when one is approved.

“I’m going to reveal something undercover: I am injected with one of the vaccines,” Gao Fu said in a webinar Sunday hosted by Alibaba Health, an arm of the Chinese e-commerce giant, and Cell Press, an American publisher of scientific journals. “I hope it will work.”

The Associated Press reported earlier this month that a state-owned Chinese company injected employees with experimental shots in March, even before the government-approved testing in people – a move that raised ethical concerns among some experts. Gao did not say when or how he took the vaccine candidate, leaving it unclear whether he was injected as part of a government-approved human trial. He did not respond to requests for comment.

Las Vegas casinos have notified their staff that if they weren’t recalled from furlough by Aug. 31, they would subsequently be fired. Major employers are required under the federal Worker Adjustment and Retraining Notification Act (WARN Act) to notify their workers when there are expected to be mass firings. MGM Resorts, Wynn Resorts, Tropicana and other casino operators sent out such notifications.

MGM told its employees that it had originally hoped the casino closures would be brief and full operations could be restored. But the pandemic has progressed, and based on currently available data, it doesn’t look like “it will be safe to restart shows prior to Aug. 31, 2020.” That means the “large majority” of employees in the entertainment and sports division will be fired on that date.

The Food and Drug Administration issued another warning Monday to not use certain hand sanitizers that may contain methanol or wood alcohol, a toxic substance when absorbed through skin or ingested. The FDA is continuing to update its “do-not-use list of dangerous hand sanitizer products,” which included 87 varieties of hand sanitizer that should be avoided, some which have already been recalled, and other products being recommended for recalls as they may contain the potentially fatal ingredient.

“Practicing good hand hygiene, which includes using alcohol-based hand sanitizer if soap and water are not readily available, is an important public health tool for all Americans to employ,” FDA Commissioner Stephen M. Hahn said in a statement. “Consumers must also be vigilant about which hand sanitizers they use, and for their health and safety we urge consumers to immediately stop using all hand sanitizers on the FDA’s list of dangerous hand sanitizer products.”

GOP relief package, with stimulus checks, panned by both sides

Negotiations for a pandemic-relief plan began with both sides far apart as Senate Republicans unveiled a $1 trillion package – $2 trillion less than the proposal announced by House Democrats in May.

Almost immediately, the GOP package was criticized by conservative lawmakers as misguided and expensive and by Democrats as a late effort that falls short of the nation’s needs to weather the economic damage inflicted by a virus that has infected nearly 4.3 million Americans and killed more than 147,000.

The bill would include another round of $1,200 direct checks to millions of Americans, more help for small businesses and money to help reopen schools, but it would also reduce the $600 unemployment supplement that expires at the end of the month.

Tue Jul 28 , 2020
COLUMBUS, Ohio – The students come into Amy Bull’s office and sit the appropriate distance away behind a newly installed plexiglass barrier. Then they immediately start firing questions at her about their careers and college classes. But more often than not these days, Bull simply doesn’t know what they are […] 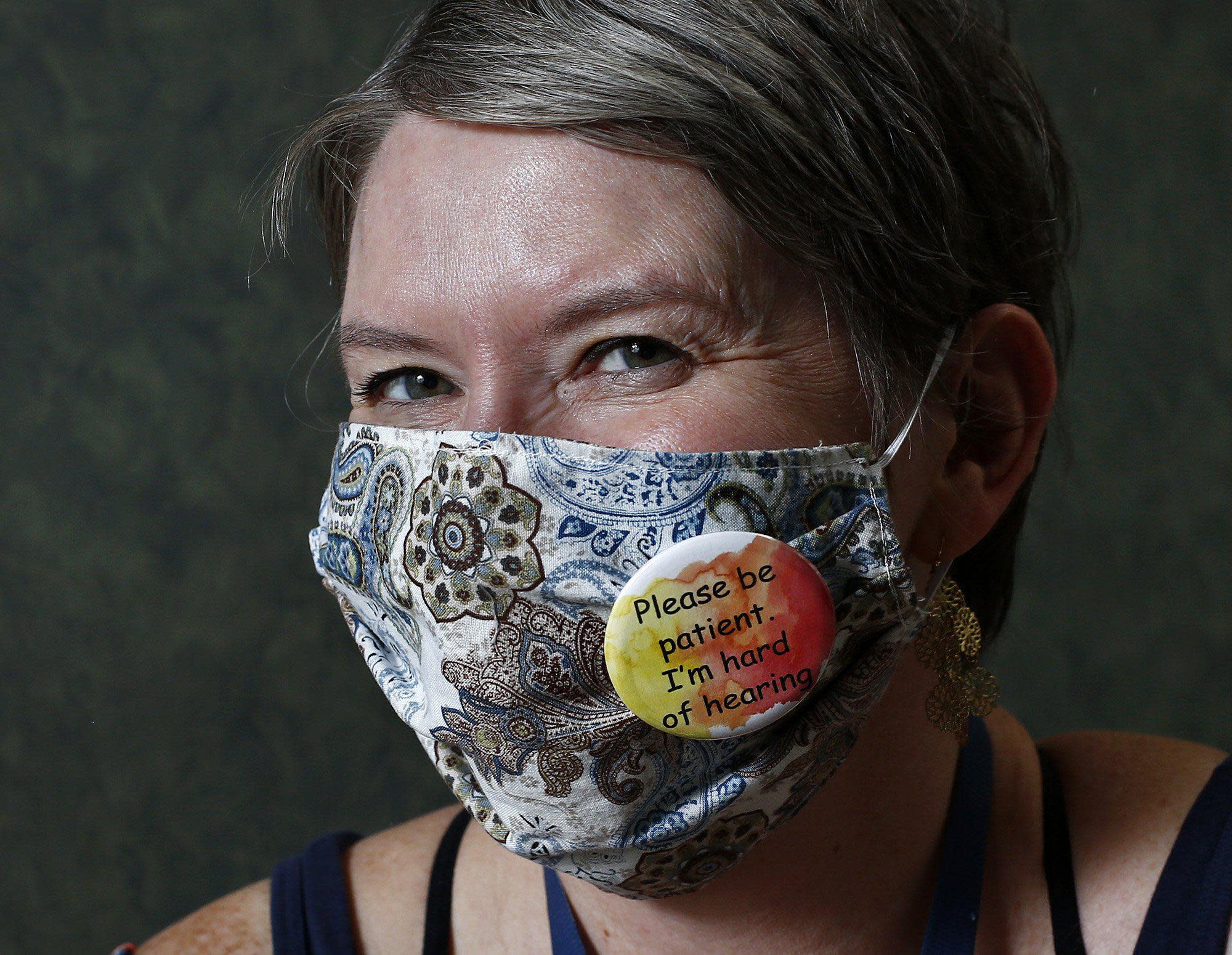