Meghan McCain says one of the biggest lessons in her TV career came when she was working alongside Harris Faulkner in the run up to the 2016 election at Fox News Channel.

A viewer had slipped into her direct messages on Twitter with an unpleasant remark, and McCain, who says she is prone to react to such things, learned a different strategy from Faulkner, with whom she appeared regularly on the Fox News early-afternoon program “Outnumbered.” The advice? “You’ve got to give people like that honey,” she recalls. If you’re going to respond, give that person something other than what they served you.

“I’m very impulsive,” acknowledges McCain, who speaks out regularly on the current panel at ABC’s “The View.” Faulkner, however, “is very cool under pressure,” she says. “She’s still water.”

Harris Faulkner will have reason to maintain her unflappable demeanor. On Sunday at 10 p.m., she will host a special primetime event that – for the first time in her career at Fox News – leads with her name. “Harris Faulkner Presents: The Fight for America” is supposed to offer a look at civil unrest and race relations in the U.S., and marks the latest in a series of special-format programs she has anchored this year (Sean Hannity will take part in the proceedings). More are on the way, notes Faulkner, who expects to continue to lead town-hall discussions as well as news specials with her name in the title.

“We are going to take some important voices to the conversation, and we are going to talk real and raw,” she says of Sunday’s broadcast during a recent interview conducted from her home over Zoom. Faulkner, one of the few Black women anchoring weekday slots on the mainstream U.S. cable-news outlets, is in a bi-racial marriage, and says she and her husband have tough discussions about such topics every day. “We are raw with each other,” she says. “I think that’s where we all need to be as Americans. We can take it.”

As Faulkner leads these programs, she is quickly becoming more integral to the business of the Fox Corporation-owned network for which she works. Faulkner already anchors two hours each weekday on Fox News. But executives in recent months have begun to add “America Together” specials and other programming aimed at kitchen-table topics like distance learning or mental health, and create elements different from the opinion programming that represents the network’s most-watched fare. Several advertisers have steered their commercials away from programs hosted by Tucker Carlson and Laura Ingraham after polarizing remarks they have made (the recent resignation of a Carlson staffer who was discovered to have been posting racist remarks online under a pseudonym hasn’t helped matters), and the new segments are meant to give sponsors other pieces of content with which they can align.

“Harris is very important,” says Suzanne Scott, CEO of Fox News Media, in an interview. “I think she has a lot of strength and a lot of grace and she knows how to stay steady even through tough breaking news.” That serves her well on her regular programs – the panel show “Outnumbered” and the single-anchor “Outnumbered Overtime” — but it also helps when asking viewers to come together to work their way through thorny issues. “We agreed it made sense to have her lead this conversation and help people find common ground,” says Scott.

Faulkner is also getting more prominent assignments. She and Bill Hemmer co-anchored a town hall with President Trump and she traveled solo to Dallas in mid June to interview him directly. The conversation, she said, was an opportunity for Americans to hear from the Commander-in-Chief not only as the pandemic spiked in parts of the country, but in the wake of protests over the death of George Floyd while in custody of police in Minneapolis. Her opening question set the tone for a conversation during which Trump fell short at nearly every opportunity: “You know, Mr. President, with all that’s happened in the last couple of weeks, I feel like we are at one of those historical moments where future generations will look back and they’ll decide who we were. Are you the president to unite all of us? Given everything that’s happening right now?”

Faulkner proceeded to ask him about his use of the phrase, “When the looting starts, the shooting starts,” and explained to him its troubling origins. When Trump made a bizarre comment about President Abraham Lincoln, who ended the Civil War – “He did good. Although it’s always questionable, you know, in other words, the end result.” – Faulkner had a mike-drop rejoinder: “Well, we are free, Mr. President.”

Journalism critics are not always generous with Fox News, but one prominent academic recently praised Faulkner’s work. In a piece written for Columbia Journalism Review, Bill Grueskin, a professor at Columbia University’s Graduate School of Journalism who is a former senior executive at The Wall Street Journal and Bloomberg, suggested other reporters could take cues from her approach.

Faulkner wasn’t prosecuting Trump on air, Grueskin says, as many White House reporters seem to do every day. She was trying to engage him in a conversation. “She gave him every opportunity to talk about this in the grand sweep of American history and racial justice,” Grueskin says in an interview. “She did challenge him,” he adds, but not in a way that would put him on automatic defense. “She wasn’t in any way a pushover, and she really held her ground.”

The key to the exchange, Faulkner says, was being ready to have a discussion. She purposely did not carry cards or papers with briefs on various issues. “I owe those moments with the President of the United States 100% of me. I have to be present and I have to be present with the facts,” she says. “Can you imagine if I’d sat there shuffling through notes?”

She might have missed important remarks. “I didn’t know where the conversation was going to go. I could not have predicted he was going to talk about Lincoln. I wouldn’t have known. But I’m glad I was listening closely,” she says. Her line “was an honest reaction. I spit the facts. It wasn’t like I had some feeling. It’s not that I feel free. I am free. You can’t argue with that.”

Harris Faulkner’s long march in the news business took her through several local TV stations, but it’s not a stretch to say it started with the U.S. military. Like ABC News’ Robin Roberts and CBS News’ Norah O’Donnell, Faulkner grew up in a military family. Her father, a former Army pilot, did two tours of duty in Vietnam, and Faulkner often had to make connections quickly in new situations as the family moved around to accommodate her dad’s career.

That facility with reaching out to people helped her at a pivotal moment. Faulkner was working as a correspondent for the syndicated newsmagazine “A Current Affair” in 2005 when she was dispatched to Aruba. While sitting in a hotel lobby, she noticed an American woman who seemed a little lost. Faulkner asked if she needed any help. “She said ‘My name is Beth Holloway, and my daughter is missing.’” Faulkner would stay on the island for a month.

The disappearance of teenager Natalee Holloway near the end of a graduation trip to Aruba captured the fascination of the U.S. media, and Faulkner was able to deliver several scoops on the subject. That led her to make appearances on Fox News as well as on Nancy Grace’s program and helped her make connections with Sean Hannity and Greta Van Susteren, among others. When “A Current Affair” was canceled, Grace asked Faulkner to fill in for her while she went on vacation. Faulkner joined Fox News that same year.

She spent many years working weekends at Fox News, until executives began to think about launching a panel show in the early afternoon, recalls Scott. The early-evening program “The Five” had long been a success for the network and there was some thought that a female-focused version would work well during the day. “Obviously, there are others in the marketplace, but we wanted our own version of it,” Scott remembers. Faulkner emerged as the moderator of the noontime “Outnumbered,” where female panelists spar with a male guest.

Many cable-news outlets have relegated journalists of color to weekend slots. Indeed, Faulkner continued to work weekends as well as maintain her “Outnumbered” duties. “I’m not talking out of school: executives at Fox felt it was just in case things didn’t work out,” says Faulkner. In 2017, she was given a second hour on weekdays – her own.

There are new signs the cable-news outlets are giving more notice to the issue, with MSNBC naming Joy Reid to anchor its 7 p.m. hour and CNN announcing earlier this week it will hire new journalists to cover the issue of race in America. NBC News’ Craig Melvin has been hosting a number of news specials during MSNBC’s daytime schedule and Don Lemon has carved out a unique role in CNN’s primetime. “It has been a long time. It has been an extremely long time. and I welcome the competition to jump in the water at any hour of the day,” says Faulkner. “At the end of the day, it’s driven by ad sales, and if you want to broaden out your revenue base, you’ve got to reach more people. And how do you do that? You make sure your people come from all different walks of life, with different points of view.”

Faulkner is part of an internal committee at Fox News that discusses matters of diversity and inclusion. It’s something Scott says she put in place several years ago, and it helps executives hear concerns from employees in editorial, technology and other places. She recently asked if members of the group would hold an open forum after the death of George Floyd. The CEO says she spent hours trying to put together opening remarks, but in the end, “I just wanted to listen.”

She heard a lot. “She meant it when she said she wanted an earful, because she sat there for an hour or more, and people had some things to say,” notes Faulkner. “We have had a journey at Fox,” she says, referring to allegations of harassment and discrimination that took place under former chief Roger Ailes, who was ousted from the company in 2016. “What you hope is that everyone shares their voice and you get to the bottom of the things that are out there.”

Fox News viewers are likely to hear more from Faulkner in months to come. “I would like to see her involved in more of our political coverage,” says Scott, “The audience connects with her.”

Faulkner says she is likely to stick to news, even if the network’s opinion programs snare its biggest audiences. “I don’t know that I would do a primetime opinion show, because I think the space is flooded right now, and I think there’s neither a hunger nor a thirst in America right now to hear Harris Faulkner’s opinion,” she says. “Everybody’s got a lane. I’m going to drive hard in mine.”

Can a cattle farm really be sustainable?

Thu Jul 16 , 2020
The Ethical Dairy There’s nothing sustainable about eating meat, is there? The Food and Agricultural Organization (FAO) of the United Nations says livestock are responsible for 14.5% of what they call ‘human-induced’ green house gas emissions. Of that, around 40 per cent comes from cattle and 20 per cent from […] 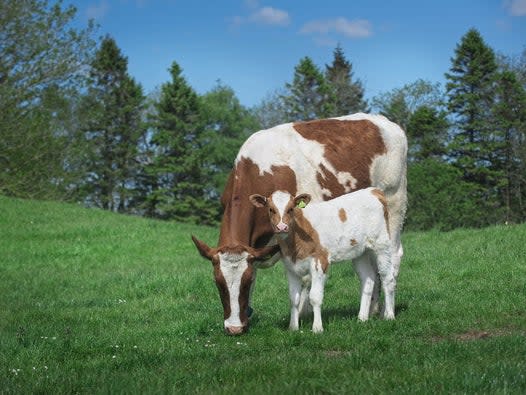