BOSTON (AP) — Colleges and universities pushed back Wednesday against the Trump administration’s decision to make international students leave the country if they plan on taking classes entirely online this fall, with Harvard University and the Massachusetts Institute of Technology filing a lawsuit to try to block it, and others promising to work with students to keep them on campus.

U.S. Immigration and Customs Enforcement notified colleges Monday that international students will be forced to leave the U.S. or transfer to another college if their schools operate entirely online this fall. New visas will not be issued to students at those schools, and others at universities offering a mix of online and in-person classes will be barred from taking all of their classes online.

The guidance says international students won’t be exempt even if an outbreak forces their schools online during the fall term.

In a statement, the U.S. State Department said that international students are welcome in the U.S., but the policy “provides greater flexibility for nonimmigrant students to continue their education in the United States, while also allowing for proper social distancing on open and operating campuses across America.”

The guidance was released the same day Harvard announced it would be keeping its classes online this fall. Harvard says the directive would prevent many of Harvard’s 5,000 international students from remaining in the U.S.

Harvard President Lawrence Bacow said the order came without notice and that its “cruelty” was surpassed only by its “recklessness.”

“It appears that it was designed purposefully to place pressure on colleges and universities to open their on-campus classrooms for in-person instruction this fall, without regard to concerns for the health and safety of students, instructors, and others,” Bacow said in a statement Wednesday. “This comes at a time when the United States has been setting daily records for the number of new infections, with more than 300,000 new cases reported since July 1.”

It creates an urgent dilemma for thousands of international students who became stranded in the U.S. last spring after the coronavirus forced their schools to move online. Those attending schools that are staying online must “depart the country or take other measures, such as transferring to a school with in-person instruction,” according to the guidance.

“They may have just re-signed leases on apartments … Our university starts in six weeks or seven weeks. They have been planning to be here, they have already spent money so it’s really devastating,” said University of Southern California lecturer Melanie Johnson.

The university last week reversed course on a plan to bring students to campus, saying classes will be hosted primarily or exclusively online. Georgetown University in Washington, D.C., and Rutgers in New Jersey this week made similar announcements amid surging COVID-19 cases.

Johnson worries that even students who start off on campus will be prevented by travel restrictions from going home if a surge forces classes online mid-semester.

“What if a student like that, who for no fault of their own, finds themselves here without their classes and ends up in a detention center or deported?” she said.

Professors fielded messages from frantic students seeking assurances that at least some of their courses would be face-to-face.

“They are, of course, all concerned,” said University of Iowa Associate Professor Jan Wessel. “I am on board with anything we can do to circumnavigate these circumstances, and I’m willing to do any in-person arrangement if it helps a student.”

But Wessel, who runs the university’s cognitive neurology lab, said it was more important to take a stand against the policy “and say politics should not use our students as a poker chip in whatever they are trying to do.” He said he would suspend his teaching if any of his students was forced out.

At Brown University, President Christina Paxson issued a statement supporting the Harvard and MIT lawsuit and said she was working with peers to find other ways to oppose the new policy.

The lawsuit, filed in Boston’s federal court, seeks to prevent federal immigration authorities from enforcing the rule. The universities contend that the directive violates the Administrative Procedures Act because officials failed to offer a reasonable basis justifying the policy and because the public was not given notice to comment on it.

The White House’s press secretary on Wednesday sidestepped a question about whether it was designed to pressure colleges to reopen their campuses, saying the policy “speaks for itself.”

Paxson called the rule “nothing short of cruel” and said she would work with faculty to minimize the chance that students would have to leave the country if the Rhode Island university had to alter its plans for a blend of classes.

“If there were a moment for flexibility in delivering education, this would be it,” he said. “Both on our own and in association with other universities, NYU will be reaching out to federal officials urging them to revoke or modify this rule.”

An online petition in favor of letting international students stay if classes were online had drawn more than 220,000 signatures by Wednesday.

After pushback from professors, Georgia university system will require masks after all

Thu Jul 9 , 2020
The University System of Georgia will now require face masks on campus as schools plan to welcome back students this fall. As COVID-19 cases continue to trend in the wrong direction, the USG says it will require students, faculty, staff and visitors to wear a face covering inside campus buildings. […] 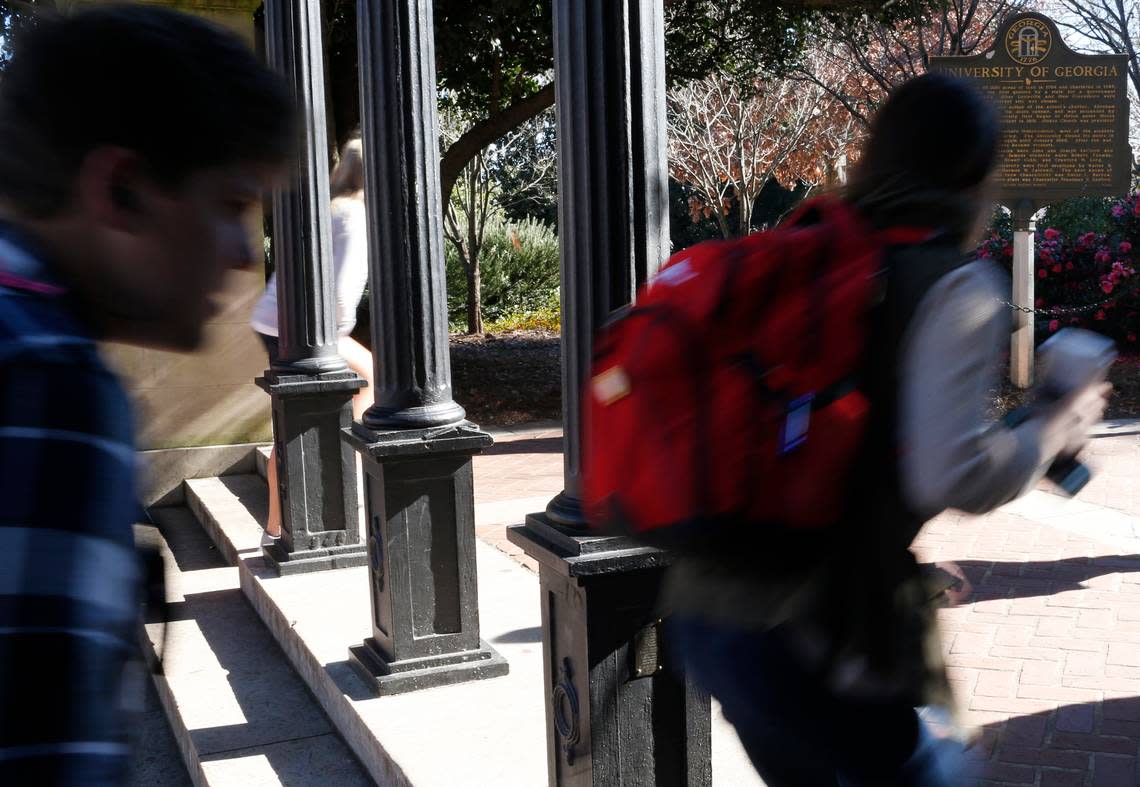