(Bloomberg Opinion) — During the weekend, the New York Times highlighted some of the comments it has received in reaction to articles about reopening schools. They were not a cause for optimism.

“Despite all my love for my students, I don’t really want to die for them or anyone else. Neither does my partner, who is living with cancer,” a teacher from Minneapolis wrote.

“Of course we need to reopen schools,” said a teacher from Maine, who then asked whether school nurses would be responsible for all the coronavirus testing that would be needed and where the schools would get enough personal protective equipment. “How many teachers receive combat pay while being forced into mortal heroics?” he added.

And one more, from Westchester, New York: “Tell me how to get a 6-year-old to not sneeze on his friends let alone play and work at a distance. … Tell me how to comfort a hysterical child from a distance of six feet. Tell me how to have a socially distanced active shooter drill.”

Across the country, many public-school teachers — perhaps most public-school teachers — as well as many parents are adamant that it’s far too early to even think about sending children to their physical schools. It doesn’t matter that of the 146,000 Americans who have died of Covid-19, only 16 have been children between the ages of 5 and 14, according to the Centers for Disease Control and Prevention.(1) In 2018, more schoolchildren died from mass shootings. Indeed, all around the world, children have been shown to be far less susceptible to the virus than adults. In California, to cite one example, those younger than 18 have accounted for 8.9% of all Covid-19 cases. Not a single one has died. (Research continues into how children transmit the virus and what the implications are.)

A realistic assessment of the risks would have parents demanding that schools be reopened; instead, many have convinced themselves that it’s too dangerous. A far greater danger, which doesn’t get discussed nearly enough, is what happens when children are deprived of school. As the American Academy of Pediatrics put it recently:

Lengthy time away from school … often results in social isolation, making it difficult for schools to identify and address important learning deficits as well as child and adolescent physical or sexual abuse, substance use, depression, and suicidal ideation. … Beyond the educational impact and social impact of school closures, there has been substantial impact on food security and physical activity for children and families.

As for teachers, they claim that they want nothing more than to return to the classroom. Yet they make it sound as if the roadblocks are simply too difficult to overcome. Here, for instance, is Julie Sellers, the president of the Cincinnati Federation of Teachers in a recent op-ed:

As long as Covid-19 continues to spread, a “normal” school experience jeopardizes the health of students, teachers, their families and the entire community. … Sending children, teachers and staff into classrooms every morning, and then back home every afternoon, where they can spread infection to their families, could be a recipe for a new deadly wave. And contrary to what some say on talk radio and Twitter, studies show that children, particularly those 10 and older, can spread the virus too.

Sellers also noted that many teachers are at risk of being infected because of underlying health ailments — which is an important concern. Mostly, though, teachers have hijacked the debate by saying that if they are forced back into schools, it will be akin to a death sentence. On Tuesday, at the annual convention of the 1.7 million member American Federation of Teachers, the union said it would support members who went on strike because their districts didn’t meet their standard of safety.

What is missing from the debate is any effort to reimagine schools — not radically, but enough to make children and teachers feel safe returning to the classroom. I am a strong believer that this needs to happen; indeed, if it were possible, I would unhesitatingly send my 9-year-old son to his New York public school five days a week. (As of now, that does not appear to be an option.) But before I lay out some possible ideas, I’d like to make three preliminary points.

First, hundreds of thousands of Americans are taking vastly more risk than teachers are being asked to. At least 86 employees working at meat and poultry facilities have died of Covid-19, and a staggering 9% of that workforce has been infected, according to the CDC. Waiters, grocery clerks, hairdressers — anyone who interacts with the public is assuming some risk. Camp counselors are dealing with children, just like teachers. Nursing home employees never expected their job would mean risking illness or death, but it does right now. They’re still going to work every day.

Can you really make the case that teachers are less essential than these other workers? Of course not. What teachers have that these other workers don’t are powerful unions and visibility in the community. They know how to advocate for themselves, and because they are caring for our children, they get a sympathetic hearing that less visible workers do not.

Second, as with everything about this pandemic, President Donald Trump has made the school crisis much worse than it had to be. He has demanded that schools be opened but has offered nothing in terms of either federal money or expertise. Nor has his education secretary, Betsy DeVos. Neither one of them seems to realize — or seems to care — that reopening schools safely is not something that can be done with a snap of the finger. One reason teachers are reluctant to go back into the classroom is that they feel the federal government doesn’t care whether they live or die.

Third, the so-called blended solution that many school districts are leaning toward — having children in school some days and learning remotely on others — is not the answer. It makes it difficult if not impossible for many parents to rejoin the workforce full time. And with sheltering-in-place lifted, it also means that children will more likely come in contact with a broader group of people than they would if they were at their desks five days a week. The blended solution actually increases the chances that children will come into contact with someone who is infected.

So the first thing school districts need to do is throw out the start date. In Florida, for instance, many counties are scheduled to begin school on Aug. 10. There’s no way schools will be ready to open safely by then. Rather than open schools on a traditional date, districts need to give themselves time to establish rules that will allow everyone to feel safe. And instead of ginning up virtual classes during that time, school officials need to focus on preparing schools for a physical opening. They need to be engaging with the teachers union, parents and other constituencies so that when school does open, everyone will have bought into the plan.

Writing in the Washington Post recently, two experts, Brian P. Gill and Jennifer S. Lerner,(2) suggest that policy makers encourage “schools across a state (or a metropolitan district) to stagger their start dates, reducing the risk of simultaneous outbreaks that could quickly create a statewide crisis.” That makes sense.

In the document it published urging schools to reopen physically,(3) the American Academy of Pediatrics listed some important but obvious steps: wear masks; place desks 3 to 6 feet apart; create one-way hallways to minimize contact; stagger classroom periods to avoid the entire student body racing from one classroom to another between periods.

They make two other recommendations that haven’t received nearly enough consideration: use outdoor space and move to “cohort classes” as much as possible.

We know now that that is far less chance of being infected outdoors than indoors. There are some states where, with open-air tents and tools like rolling blackboards, outdoor classes could take place year-round. But even in most of the cold-weather states, outdoor learning is feasible through mid- to late October. Would it be ideal? No. Would it be preferable to the kind of virtual learning that took place last spring? Without question.

You’ve no doubt read articles about how some parents are trying to set up “education pods” in which a half-dozen or so families create their own bubble, which includes hiring a private tutor. A cohort class is essentially the same thing except that it takes place inside school.

A teacher is assigned, say, 10 children, all of whose families are virus-free. The teacher and students are together all day, insulated from other kids and other teachers. Recess and lunch — and starting times, for that matter — are staggered to minimize contact with other pods. If someone in a pod becomes infected — and this would include anyone living in the household of any of the students — the pod is shut down. The others are quickly tested, with contact tracing kicking in.

Because a pod system should contain the infection to just that one pod, it would allow a school to stay open even if someone does get infected. This approach obviously requires additional teachers and additional classroom space — which also means it requires more money when local budgets are depleted because of the pandemic.

The one useful thing the Trump administration could do is supply that money — and soon. On Sunday, the president’s chief economic adviser, Larry Kudlow, said that the next stimulus bill would include aid to schools. It needs to — there is no other alternative.

No matter how many safeguards are put in place, there will always be parents fearful of sending their children to school. They should have that option. The solution is an online platform like Zoom that will allow at-home students to watch their teacher in the classroom and do their assignments remotely.

There will also be teachers who remain fearful, especially older teachers or those whose health puts them at risk. Technology ought to be able to help here as well. As I mentioned in a previous column, using a Zoom-like platform and a large flat-screen monitor — one big enough for all the students to see — at-risk teachers could deliver lessons from home while still commanding the classroom. A young teacher’s aide could work in the classroom to facilitate the lessons.

There are other things that would have be done, such as making school buses safe and improving air-filtration systems. There may be better ideas than the ones I’ve listed here. And let’s face it: Nothing in life is ever 100% safe.

But it is undeniable that with enough thought, ingenuity and money, children should be able to attend their physical schools. The sooner teachers, parents and school administrators begin focusing on ways to make it happen — instead of coming up with reasons not to do it — the better off everyone will be.

(2) Gill is a senior fellow at Mathematica, a nonpartisan public-policy research and analysis firm. Lerner is a professor of public policy, management and decision science at the Harvard Kennedy School.

This column does not necessarily reflect the opinion of the editorial board or Bloomberg LP and its owners.

Joe Nocera is a Bloomberg Opinion columnist covering business. He has written business columns for Esquire, GQ and the New York Times, and is the former editorial director of Fortune. His latest project is the Bloomberg-Wondery podcast “The Shrink Next Door.”

For more articles like this, please visit us at bloomberg.com/opinion

Wed Jul 29 , 2020
Leaders in Florida and the coronavirus epicenter of Miami-Dade have failed so badly at managing the response to the highly infectious disease that we’ve become the poster child for COVID-19 abroad. “Miami has more COVID-19 cases than all of Australia, and thousands more are still being diagnosed every day,” reports […] 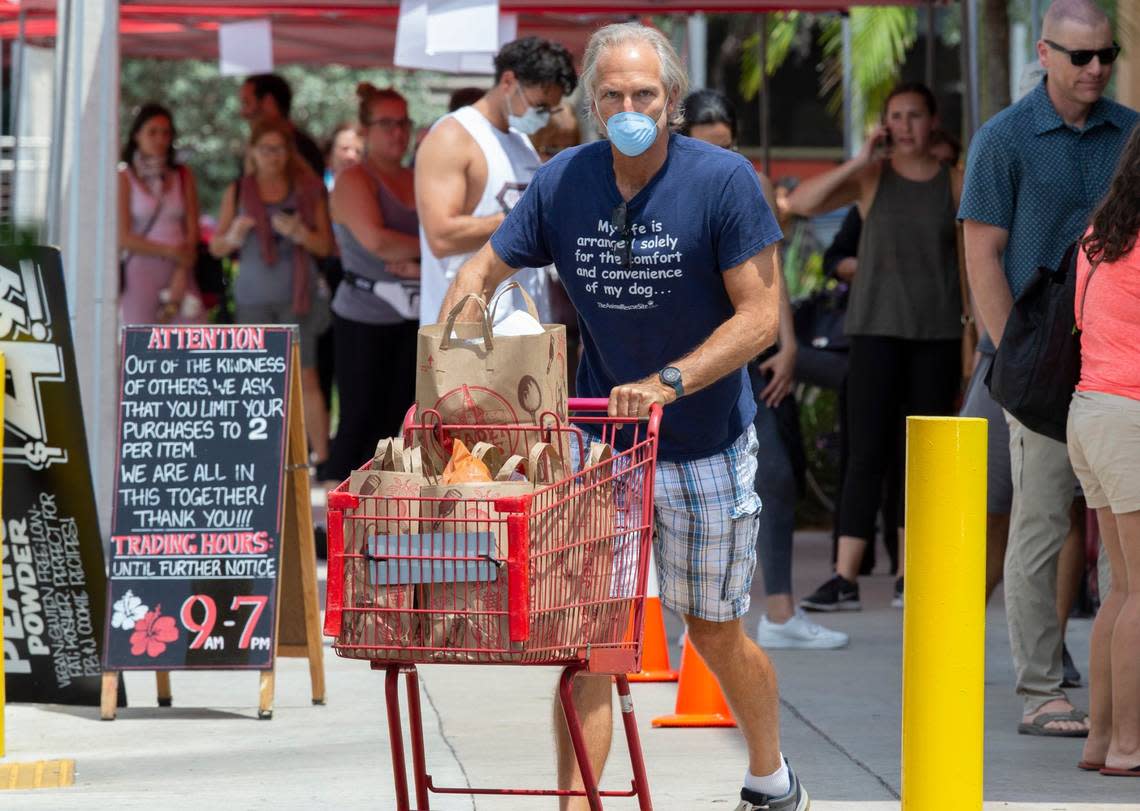