If there’s one thing the world could use right now, it’s a drag show.

What better way to escape the grim realities of our “new normal” than the intoxicating cocktail of joy, sweat, wit and scathing political commentary that’s served up when our favorite queens take the stage?

But right now there are no in-person drag shows, no dimly lit bars to pack into on a Saturday (or Monday or Tuesday or any other) night, and those who have built a career performing drag, like so many others, have been forced to rely on digital options to reach fans and earn income.

“I’ve been quietly doing my thing here in Columbus,” Nina West, Miss Congeniality from Season 11 of “RuPaul’s Drag Race,” told HuffPost over the phone last week. West, who had just returned from nonstop touring in Europe and the U.K. before COVID-19 struck, now hosts a weekly children’s storytelling show as well as a weekly podcast.

“It’s produced out of my house, super Zoom-y,” she said, laughing. “The quality is whatever I can do on my own. The one thing this thing has taught me is how to pivot.”

Naomi Smalls, who recently announced the upcoming launch of her new digital solo show “The Smalls World Show” on Sept. 1, told HuffPost having to pivot is nothing new for her.

“The LGBTQ+ community … we’ve always adapted to however the world is going and making it the best for ourselves, because we’re still not necessarily the main focus,” she said. “It’s meant a lot of time on social media engaging with fans and hustling to help the venues.”

Along with these queens, venues across the country, like Roscoe’s Tavern in Chicago, where Smalls, runner-up of “Drag Race” Season 8, has frequently performed, are grappling with how to survive during the pandemic. Because many have been forced to close or are trying to survive by offering takeout or outdoor seating options, these safe and joyful spaces are at high risk of disappearing. Many gay bars have already had to permanently close their doors.

“It makes me sad. For the past five years I’ve been performing and traveling and I’ve developed a really good relationship with a lot of these venues, and it’s interesting to see how they’re all handling business,” Smalls said. “I’m trying to do my part and contributing what I can. Roscoe’s was my home for a couple of years and they are they best as far as how they treat queens and performers. I did a video for them on social media that was like, ‘Please come to Roscoe’s and get your chicken tenders!’”

West echoed Smalls’ sentiment, acknowledging that despite the work performers are doing to create that sense of community, there is still the very real fear of what’s lost when people no longer have the opportunity to meet friends, experience the queer community, and see drag together in physical spaces.

“Virtual drag shows are wonderful, but they will never replace seeing a king or queen or burlesque performer in front of you, sweating on you, holding your hand, celebrating the beauty of our community,” West said. “Specifically for LGBTQIA+ people, this quarantine and isolation is supremely dangerous for our psyche, value and worth. Some people may be living in situations which are not conducive or positive to reinforce their identity and humanity. Our ability to gather and be around people who are like us is so important to celebrate our queerness. We’re going to have to be a brave new world when this is all said and done, and we’ll have a lot of work to do to rebuild safe spaces.”

Bob the Drag Queen, whose Emmy-nominated HBO show “We’re Here” was recently renewed for a second season, has also experienced the devastation the pandemic has had on gay bars firsthand.

“The bar I used to work at in New York City just announced it would not be reopening,” the “Drag Race” Season 8 winner told HuffPost. “It’s scary and alarming. Hopefully, though, at least when the other side comes around, there will be space for new businesses to pop up, to keep creating those venues for people to be able to perform in, because it’s so important in the queer community to have those spaces.”

Smalls also acknowledged the “huge loss” that losing live drag has had on the sense of community that is so crucial for LGBTQ+ people.

“I grew up with an amazing family, but being surrounding by like-minded people who have the same interests as you, a lot of queer people deal with the same storylines through our youth and navigating the world,” she said. “So being at a show is just a big party, just such a feeling of togetherness.”

There are upsides to drag moving online, though. Digital shows make the experience more accessible to a much wider audience.

“I have more time now to engage with people online,” Bob said. “I’m connecting with people who have never been able to see a drag show before. It means a lot.”

It’s hard not to fantasize about what a live drag show would look and feel like right now, considering drag’s unique ability to critique culture and politics ― especially with the presidential election just a few short months away. But Bob, Smalls and West are still using their social platforms to provoke change.

“I’ve been burying my head in my activism,” Bob said. “I’m proud to be one of the founders of the Black Queer Town Hall. I’ve been using my voice to talk about trans lives ― that’s what I’ve been focusing on.”

“It’s really important right now for queens, kings, AFAB, nonbinary burlesque performers all over this country to stand up for political causes, but also for Black trans lives and voices, Black queer voices, queer voices of color,” said West, who recently partnered with Dolly Parton on a collection benefiting Parton’s children’s literacy charity Imagination Library. “There is so much we need to be doing, and there’s a reason why all of this is happening now. We are called to action and we need to listen to that call and act in response. It’s a great time to demand mail-in ballots, look into how you can volunteer in polling places to help prevent voter disenfranchisement, ensuring our November election comes easier for all of us, not just some of us.”

CORRECTION: Due to an error by our photo provider, a caption on the lead image for this story misidentified Bob the Drag Queen.

Thu Aug 6 , 2020
ACROSS FLORIDA — Thousands of Florida teachers are awaiting word on whether they’ll be heading back to the classroom this month after the Florida Education Association filed a lawsuit asking a judge to let the school districts decide for themselves when school can safely open during the coronavirus pandemic. On […] 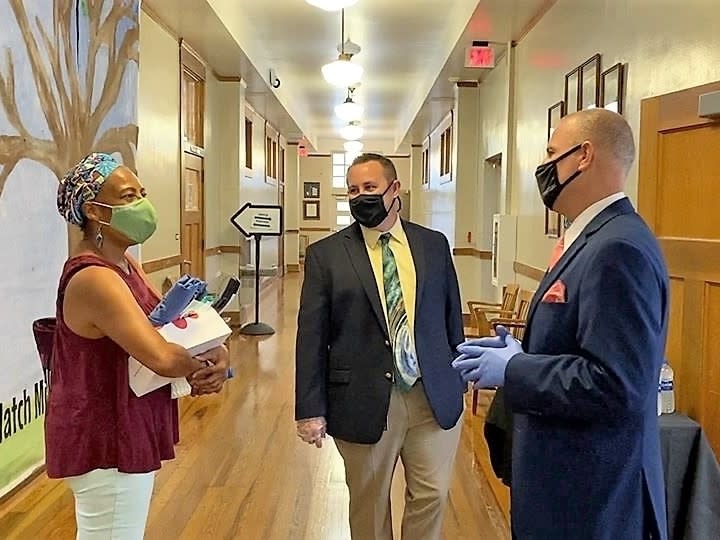