The coronavirus certainly seemed to cancel the hot dog’s biggest season as summer plans everywhere have been postponed or scraped as a result of the global pandemic. But through months of quarantine and uncertainty, people across the nation have actually turned to the classic comfort food as a way to ensure that freezers are stocked and smiles are served during this difficult time, leading the industry to celebrate one of its most successful summers for this year’s National Hot Dog Day.

“We turn to foods that give us comfort and make us happy and we know we can trust,” Eric Mittenthal, president of the National Hot Dog and Sausage Council, tells Yahoo Life. “We know a hot dog is gonna be delicious, we know it’s gonna be safe, we know that it’s gonna be affordable and so it’s just a food that’s very easy to turn to and we’ve been eating it throughout our whole lives.”

The history and symbolism of the hot dog dates back to the 1800s when the “frankfurter” made its way from Germany to America, making the hot dog an immigrant to the U.S. “like so many of us and our ancestors,” Mittenthal says. The food was, he adds, “enjoyed by populations who were coming over to America and were embraced in communities around the country as a food that they enjoyed.”

This history is something near and dear to Joe Quinn, CEO and co-founder of Feltman’s of Coney Island in New York, who explains that it was actually baker and German immigrant, Charles Feltman, who invented the hot dog as Americans know it on the beaches of Coney Island.

“While witnessing beachgoers struggle to enjoy a meal with plates and utensils on the beach, he had an ingenious idea to create an elongated bun and stick a traditional German sausage in the middle of the sliced opening. The hot dog was born,” Quinn tells Yahoo Life. “He’d sell thousands of hot dogs that summer and eventually turned his small pie cart into the world’s largest restaurant right on Coney Island. It’s a pure ‘American Dream’ story of an immigrant making good in America.”

It was during these early years in U.S. history that a number of food items were invented and coined as “quintessential American food,” according to Sarah Wassberg Johnson, an educator known as The Food Historian. Notable examples also include ice cream cones and cotton candy. Hot dogs, however, stood out among the rest, Johnson says, because of its more substantial ingredients, leading eaters to more largely associate the meat and bread combo as a ‘real’ meal than other common pushcart foods.

The portable nature of the food item also helped grow the food’s popularity, becoming a staple at various outdoor venues, even earning prime placement at baseball stadiums just as the sport was becoming a favorite pastime stateside. “As crowds flocked to sit and watch the game, the obviousness of hawking portable, easy to snack on foods like peanuts, popcorn, and hot dogs soon followed,” Johnson says.

Although consumed year-round, the hot dog’s history is a major reason why it’s so inextricably linked with summer. But with the 2020 season looking different because of the coronavirus pandemic, Mittenthal says that the industry didn’t know what to expect. Especially when meat plants responsible for meat products in grocery stores were impacted by the pandemic.

“The biggest challenge that we faced as a whole within the industry was when we had some plants go down early on due to workers getting sick, and so the overall meat supply was reduced a little bit for a few weeks back in April,” Mittenthal notes.

For Quinn, the possibility of plants being affected was one of many circumstances that he and his team at Feltman’s had to consider early in the pandemic. “We anticipated that our foodservice accounts, i.e. restaurants and food stands, would likely be impacted by closures and that simultaneously, public fear of food shortages could spark waves of panic buying and potentially disrupt the supply chain,” he says. “With this in mind, we increased production and doubled our efforts to ensure our retail partners’ shelves were amply stocked. Additionally, as cities started locking down and more and more people were staying home to flatten the curve, we ramped up our focus on e-commerce to ensure that our customers, especially the most vulnerable, were able to safely receive online delivery.”

Quinn credits the company’s “preparation-oriented mindset” for setting them up to get through the pandemic. For the industry as a whole, however, it was ultimately what made the hot dog popular to begin with in terms of cost, accessibility and shelf-life which made the food item an easy choice during the pandemic.

“They are inexpensive, store well in the fridge or freezer, can be cooked up in a flash, and are easy to make,” Johnson says. “Their tastiness and association with childhood and comfort also makes them more cravable in times of emotional and economic stress.”

Beyond surviving, Mittenthal says that the hot dog industry actually thrived during this unprecedented time. “The sales of hot dogs have been pretty astronomical from the very beginning to the point where it was more than double last year’s sales back in March and April for a few weeks,” he shares.

Now, in celebration of National Hot Dog Month and Wednesday’s National Hot Dog Day, Mittenthal explains that the National Hot Dog and Sausage Council has big plans to celebrate the hot dog by giving back to Americans in need with a partnership with Feeding America. “Our members will be donating 325,000 hot dogs to Feeding America and going to 25 different Feeding America food banks around the country,” he explains. “It’s a great example of how an industry can come together and feed people in a way that celebrates a great food and also provides.”

Fri Jul 24 , 2020
BLAINE, Minn. (AP) — The virus outbreak has squelched the upbeat and welcoming vibe that marked the debut of the 3M Open last year. The fans might have been absent, but the soft greens were plenty friendly Thursday for Richy Werenski to take full advantage. ”I have a good feeling […] 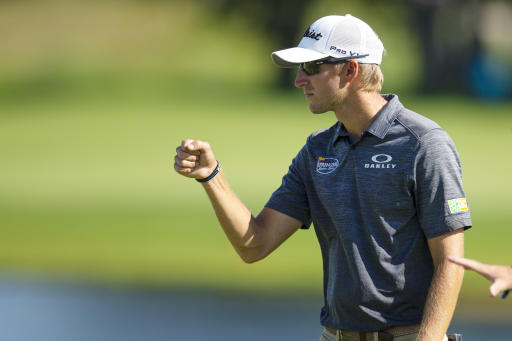