As Kamala Harris accepts the Democratic nomination for vice president, her fellow Howard alumni and graduates of other historically Black colleges and universities are gearing up to support her historic run. The Biden-Harris campaign, however, has yet to reveal how they plan to tap this active segment of the Black community — a core demographic they desperately need to turn out in high numbers in November.

The campaign has acknowledged Harris’ nomination as a boon for Black colleges across the country. Yet, given the wide influence that Black college graduates boast, failure to fully galvanize them would be a missed opportunity, some advocates say — especially as Black Democrats who were once on the fence about Harris begin to warm to her.

Ahead of the 2020 primary season, the Biden campaign launched the HBCUs for Biden initiative, aimed at garnering support among young Black voters. Co-chaired by three current HBCU students, the plan also folds in more than $70 billion in additional funding for Black colleges and universities — a monumental sum of money for the institutions, whose median endowment sits at $12 million. Biden has also proposed free tuition for public, four-year HBCUs as part of his “Build Back Better” plan.

And his ticket has some built-in support: Howard alumni rallied behind Harris during her 2016 senatorial campaign and 2020 primary run. Biden’s decision to add the California senator and former prosecutor to the Democratic ticket makes Harris not only the first Black woman to be a major party’s vice presidential nominee, but also the first graduate of an historically Black college or university (HBCU). It’s injected a new burst of energy into the HBCU community’s engagement with the presidential race.

“Howard really paved the way for a lot of the HBCUs and the significance of (Harris) being at the top of the ticket just really shows the value of HBCUs and … how transformational this would be for us,” said Charlie Lewis, a 1989 Howard graduate. “We have over 86,000 alums and we’re not all monolithic,” Lewis continued. “We come from all over the diaspora, the African diaspora. That’s unique. And she takes a part of that.”

Howard University President Wayne A.I. Frederick described seeing a Howard alumna on the Democratic ticket as both “humbling” and “exhilarating.” Harris and her team, he said, have demonstrated they are aware of the unique challenges facing the African American community and want to help remedy them, but they can’t do it alone.

“She clearly is going to be a champion and that’s good,” Frederick said. “But we, as a population have to continue to push for more broader reforms, etc. and recognize that it’s going to take all of our elected officials to participate at the federal, state and local levels.”

Members of the Howard network maintain that the unique political and cultural education the university offers set the standard for their success as Black leaders in America. Its most notable alumni include Thurgood Marshall, Elijah Cummings and Stokely Carmichael. Harris’ time at Howard coincided with a pivotal era of Black political activism, from Jesse Jackson’s first presidential run to the international protests against apartheid in South Africa.

However, even as Harris’ fellow Howard graduates recognized the historic importance of her selection, they emphasize that symbolism is not enough. In particular, they hope she and Biden are prepared to reckon with their past records — hers as a local prosecutor, his as the architect of the 1994 Crime Bill — and the way those policies helped pilot harmful systems that have been particularly detrimental to Black communities. It’s perhaps the biggest obstacle to Biden and Harris’ efforts to rally the same voting bloc that has overwhelmingly supported Democrats for decades.

Jade Agudosi, a 2018 Howard graduate, said that while she is excited about Harris’ nomination, she doesn’t subscribe to the mantra that’s it enough to “black faces in high places.”

“There has to be more that’s involved in that,” said Agudosi, who was the president of Howard’s student government association when students occupied the university’s administrative building in 2018. “There’s work that goes along with that.”

After developing a reputation in California as a pragmatist on crime, Harris has shifted her approach to criminal justice in recent years. As a senator, her legislative record has been markedly more progressive than in the past, including sponsoring a number of pieces of criminal justice reform legislation alongside her Democratic and Republican colleagues. In June, she co-authored the Justice in Policing Act, which aims to standardize police force tactics and independently investigate instances of misconduct.

“In my career, the conventional wisdom was that people were either soft on crime or tough on crime. But I knew we should be smart on crime,” Harris said in her commencement address to Howard’s Class of 2017, explaining her work to reduce recidivism rates as a district attorney. Challenging the status quo while making substantive improvements to Black communities were not easy goals, but, she said, she learned the playbook through her Howard education.

Her explanations of her prosecutor past were not enough to win over the coalition of Black, brown and young voters she had hoped to appeal to in the Democratic presidential primary in 2019. Her big bet on South Carolina, the early primary state thought of as a snapshot of Black voter preferences, paid off only marginally. Before suspending her campaign for president last December, Harris hardly broke through the top three choices among Black voters.

Yet, in the face of November’s high stakes, even those who did not support Harris or her past policies are now giving her the benefit of the doubt. That’s echoed in recent polls, which have found her addition to the Biden ticket has the support of a majority of voters across races and ideologies. A flash poll of voters from Morning Consult revealed that 84 percent of all Democrats and 79 percent of Black voters approve of her.

“I’m not trying to square it. She was a prosecutor. And hell, I can think of a bunch of things that I probably disagree with her about. And that’s the same for probably any other elected official around here,” said Ras Baraka, the current mayor of Newark who graduated from Howard in 1994. “I do believe, however, that her idea of America includes us in it. And her idea of what should happen is different than what we’re experiencing now … and whatever issue I have with her, she deserves a pass. For right now.”

Harris’ supporters say she is more than prepared to tackle issues about her record on law enforcement.

“She has never chosen the path of least resistance,” said Kirsten Allen, a Howard alumna who was Harris’ national press secretary during her presidential campaign. “When she would do interviews, especially as we got in the swing of things [during the presidential campaign], she would start off a lot of questions about her prosecutorial record with the statement, ‘I understand why black and brown people have a problem with prosecutors, I totally understand your concern.'”

Since Biden’s VP announcement last week, questions about Harris’ loyalty to the Black community have returned as GOP talking points. Harris supporters say her choice of college answers many of them.

“When you choose to go to Howard after living in Canada and coming from California, you’re making an affirmative decision about Blackness,” said Keneshia Grant, an Associate Professor of Political Science at Howard University. “When you choose to pledge and stay in the sorority, stay active with it after you leave school … and all of these other things, like, she’s making multiple affirmative decisions about Blackness. She’s embracing it.”

Grant, who had been quietly hoping that Biden would choose a Black woman for his vice presidential ticket in recognition of the value that Black voters bring to the Democratic party, said she was surprised by how immediate and vehement the critiques of Harris were.

“People did not even take a moment to celebrate the historic nature of her being named to the ticket,” Grant said. “I understood why people had these feelings about critiquing her but I did not understand why they could not celebrate the progress.”

To some, the unwillingness to recognize the gravity of her accomplishment reveals a more insidious trend among her detractors, who have pointed to specific career decisions to make sweeping calculations about how deserving of the Black vote she might be.

“The reality is, we made this mistake in the Black community in 2016,” said Ravi Perry, chair of the political science department at Howard. “I think if we allow ourselves to forward these narratives, this time around again we’re only shooting ourselves in the foot, whether it’s Hillary Clinton and ‘super predators’ or the crime bill or Anita Hill, or Kamala Harris’ prosecutorial record.”

In the absence of in-person campaign events and as college courses largely take place online, any campaign’s engagement with students will be limited in the lead up to November. HBCUs for Biden remains active and has hosted events for the campaign in the wake of the announcement of Harris’ vice presidential selection. However, HBCU grads, in particular, remain an untapped resource for campaigning and fundraising.

The Biden campaign said in a statement that Biden and Harris recognize “the significant role that Black colleges and universities play in our society” and said that, “America can expect that the Biden Harris administration is committed to ensuring a more equitable, sustainable, and prosperous future for these storied institutions.” But it did not provide any specifics on its outreach strategy to the broader HBCU community.

While Biden’s polling with Black voters tops 90 percent, making sure their enthusiasm translates to electoral support in November is crucial. With a Black woman and HBCU grad on the ticket, Democrats have a chance to close enthusiasm gaps that cost Hillary Clinton the White House in 2016.

“HBCUs are a touch point in African American society. They mean a lot to all of us,” said Lodriguez Murray, Senior Vice President of Public Policy and Government Affairs for the United Negro College Fund. “The good education, the wraparound services, the economic empowerment — that creates loyalty in that community and galvanizing that loyalty for any candidate would be a game changer.”

'We have had parents crying for us to open'

Thu Aug 20 , 2020
Children’s summer camp provider Richard Bernstein says he has had mums and dads sobbing down the line to him. “We had parents on the phone, literally crying, asking us to open this year,” says Mr Bernstein, director of UK company XUK Camps. “It hit me pretty hard because I don’t […] 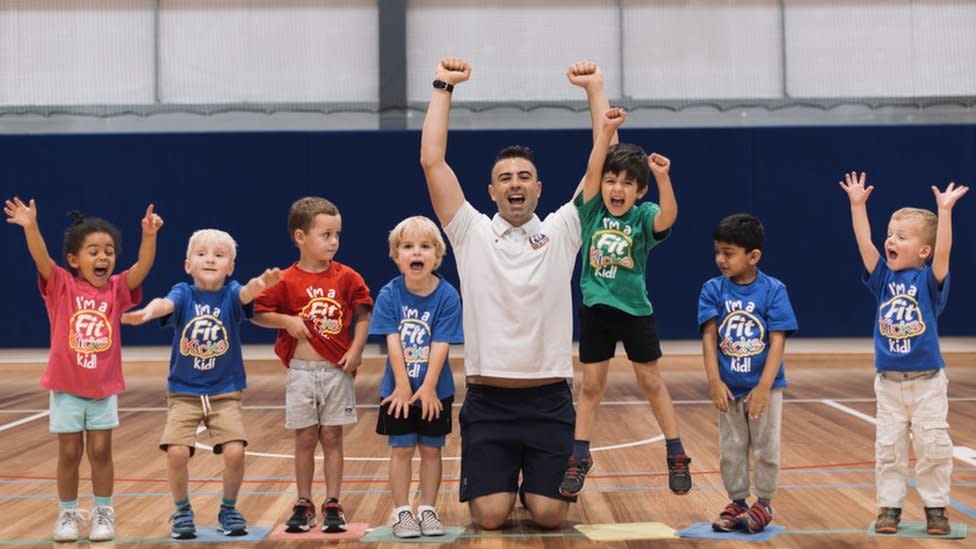