This article about higher education in Ohio was produced in partnership with The Hechinger Report, a nonprofit, independent news organization focused on inequality and innovation in education. This is part 5 of the Colleges in Crisis series.

Given current circumstances, Richard Vedder, an economics professor emeritus at Ohio University, is teaching his fall course, “Economic History of Europe,” for a salary of $1. Plus, a parking sticker.

“It will take a little bit of burden off the university,” said Vedder, a national expert on higher education finances. His career — he began teaching at O.U. in 1965 — spans the robust rise of public higher education and, now, its shakiest chapter.

The coronavirus crisis has hurt colleges everywhere. But for schools like O.U. — nonflagship public campuses in Ohio and across the Midwest that were already struggling — it has hastened a reckoning. The campuses have become heavily reliant on tuition dollars just as the Midwest faces a demographic dive and continued cuts in state funding.

At the same time, more students need college to get jobs, but it is harder for them to afford. What role should these regional universities play now?

Sprinkled throughout the Midwest, including in remote areas — O.U. is in southern Ohio, in the foothills of Appalachia — these schools were built to educate locals and serve as regional economic engines. But after seeking national profiles to attract out-of-state students in a bid for more tuition dollars — and financial survival — there is now “a lot of hand-wringing around ‘what are we supposed to be?’” said Christina Ciocca Eller, an assistant professor of sociology and social studies at Harvard University who studies regional public universities. “There is big tension over purpose and identity.”

Basic questions — Who should O.U. serve? What kind of school is it? And how do you pay for that? — are fueling conflicts with administrators that, amplified by the pandemic, have ignited protests by faculty, staff and some students and alumni.

The answers could have big implications not just for Ohio University but also for other regional public universities — and the communities they serve.

Founded in 1804 on hills beside the Hocking River in a city named Athens for its ambition to be a center of learning, O.U. is the state’s and region’s oldest public campus. It is known for its liberal arts programs, including journalism — Roger Ailes, Clarence Page, Peter King and TV sports reporter Allie LaForce are grads — and, more recently, for business and health care. In the Honors Tutorial College, one student is guided by one professor.

The dependence on enrollments and tuition has become a central problem for many Midwestern schools. A June 2020 study by the Brookings Metropolitan Policy Program shows enrollments at regional public universities across six states — Illinois, Indiana, Michigan, Minnesota, Ohio and Wisconsin — have fallen by over 10 percent since 2011.

Meanwhile, flagships and major research campuses saw a 1.4 percent rise in enrollment. Plus, flagships like Ohio State, which one O.U. professor called “the behemoth to the north,” in Columbus, have more financial resources. In-state tuition is less there, $11,518. And unlike O.U., Ohio State can offer robust campus aid to its poorest students.

The result is an inversion of what makes sense: These regional public universities serve a greater proportion of in-state, low-income and first-generation students than the flagships do, but they often end up costing more to attend.

Still, these schools are vital to the Midwest. The Brookings study counts 100 regional public universities serving 1.2 million students, greater density than anywhere else in the country.

To Vedder, a committed Midwesterner who turned down Harvard College as a youth to stay in the region, O.U. is caught in a competitive game that it is losing.

“We have a crisis on our hands because there is a flight to quality,” he said. “Everyone wants to go to the best school.”

In remarks he had planned to deliver in person to the board of trustees on March 19 (emailed instead), Vedder said O.U. has faced “a spectacular reputational decline” as a result of wrong-headed moves by leaders with “a disdain for excellence” that is now hurting enrollments.

From 2005 to 2020, Vedder said, O.U. fell from 98th to 185th in the U.S. News Best National University rankings. Instead of doubling down on academics, he said, the university has invested in “activities having little to do with learning and discovering,” spending on “administrative bloat” and Division I sports. Rather than by buying “ads on television” or seeking “success in ball-throwing exercises,” he said, universities “become great when their students become Rhodes Scholars or their faculty win Nobel Prizes.”

Others agree. Last fall, a white paper by O.U.’s chapter of the American Association of University Professors pointed to the same culprits: a $20 million annual loss in athletics and rising numbers of administrators, from 800 to more than 1,190 since 2010.

This critique came even as M. Duane Nellis, the university president, last fall announced a “bold and dynamic vision” for the university and an incoming class that had “posted a record-high grade-point average” of 3.55 on a 4.0 scale.

The problems predate Nellis, who arrived in 2017. But they haven’t gotten better under his watch, either. Enrollments have been falling since 2017; for the past three years the university has dipped into reserves.

Then came the pandemic.

A battle over layoffs and strategy

This spring, everything got worse. For everyone. In Ohio, which has 14 public universities and 24 branch campuses, the government cut its higher education budget by $110 million.

At O.U., there were three rounds of layoffs, nonrenewals and cuts in May and June that have added up to a loss of 334 positions, just over 7 percent of the workforce (in addition, 82 faculty members have taken buyouts, according to a university spokesperson). The actions drew faculty, staff and union workers to protests bearing signs like “Can’t Spell Ouch without O.U.”s.

In May, the Faculty Senate voted “no confidence” in Nellis and his vice president of finance.

Nellis acknowledges the challenges, but emphasizes that, before the pandemic, there was a plan.

“We were in the middle of a strategic repositioning” that involves a rebranding, he said. Overall, he is trying to make the university “more nimble and dynamic” to be able “to pivot where there are emerging opportunities.” As an example, he mentioned esports and a new curriculum that could be used as “a vehicle to enable training.”

It’s a strategy that faculty are blanching at. Jennifer Fredette, an associate professor of political science, said the overarching problem is the dearth of state funding, but that the administration’s budget choices reflect the wrong values.

“We do not enrich our citizens and help ensure equal access if we pour our money into marketing and recruitment,” she said.

Recent O.U. alumni built a website of testimonials protesting layoffs because, as one founder put it, this “is not the O.U. that we knew.” A current student made a Twitter hashtag, #SaveOUrprofs.

Faculty from O.U., Ohio State and Miami of Ohio started #SaveOhioHigherEd, signing a solidarity pledge and vowing to let “the administrative class” know that it is “running higher education in a very different way than we want to see it run,” one organizer said.

More than 100 faculty members, adjuncts and others joined the group’s first Zoom meeting. This was before adjunct faculty at O.U. were laid off, but amid rumors of cuts to the Women’s, Gender & Sexuality Studies and the African American Studies departments. Although those cuts did not happen, the rumors fed a sense that the administration misunderstood the college’s liberal arts mission.

Akil Houston, a filmmaker, social critic and hip-hop scholar who is an associate professor in the African American Studies department, said the discipline does not generate many majors and minors, a typical university measuring tool. Yet, he said, “given that we live in a racist, sexist, classist society,” the department’s offerings are a place where students in fields from business to science can have conversations on issues now seen as critical in any career. It is one reason why his hip-hop course, he said, is always full.

To those focused on the financial impact of student enrollments, he would ask, “What does African American Studies provide to a university and how does it play a role in retaining students of color?”

It is not a rhetorical question. O.U. has an urgent need to enroll and retain students. This got trickier after a surge of COVID-19 cases in the region; on July 31, Nellis announced that classes would begin Aug. 24, remotely for most. Only a few hundred students, plus some athletes, will be allowed on campus. Phase 2 envisions inviting more back Sept. 28, but there is skepticism about that happening, and the plan is for all classes to be remote after Nov. 20.

Without students this fall, one professor predicted, “you can toe tag us.”

When the campus emptied in March, Patterson, a former O.U. psychology professor, saw how it hurt the shops and eateries along Court Street. Now, he wonders, what’s next? He fears that absent students will reduce the city’s 2020 census count, leading to $30 million in lost allocations over a decade. And if students do return on Sept. 28, only to leave in November, he worries for local businesses: “How long will those establishments be able to hang in there?”

And, what about those university layoffs?

“I am going, ‘OK, where are the comparable-paying jobs in the city of Athens that these people could be employed into?’” he said. “And they are few and far between.”

Patterson traces a troubling forecast. The laid-off commute farther for jobs, then leave Athens altogether. Will they be able to sell their houses? “Will we see more and more vacant homes?”

These are concerns not only for the city, but also for Athens County. It is one of the poorest in Ohio; O.U. is — by far — the county’s largest employer and the region’s economic driver. It’s why Larry Fisher, an O.U. grad and now executive director of the Appalachian Center for Economic Networks, worries about the loss of disposable income from layoffs and early retirements. Businesses count on that spending, he said, adding that O.U.’s troubles, “will ripple down to the more rural communities and counties.”

To Vedder, the economics professor and a longtime Athens resident who counts bar owners and landlords among his friends, the economic security that his public university once provided his community is falling away.

Yes, he said, this is “an unusual downturn,” amplified by the fiscal stresses of the coronavirus pandemic. Before, there was a cluster of problems, from a decades-long decline in state funding to a competition for students so fierce “someone’s gain comes at someone else’s expense,” he said. But now, “It is the perfect storm at work here.”

Sign up for The Hechinger Report’s higher education newsletter.

Wed Aug 19 , 2020
First, the University of North Carolina. Now, North Carolina State University. A day after university officials in Chapel Hill decided to pivot to online classes after at least four clusters of outbreaks of COVID-19 in student living spaces, the Raleigh university reported its first cluster of positive cases that included some of […] 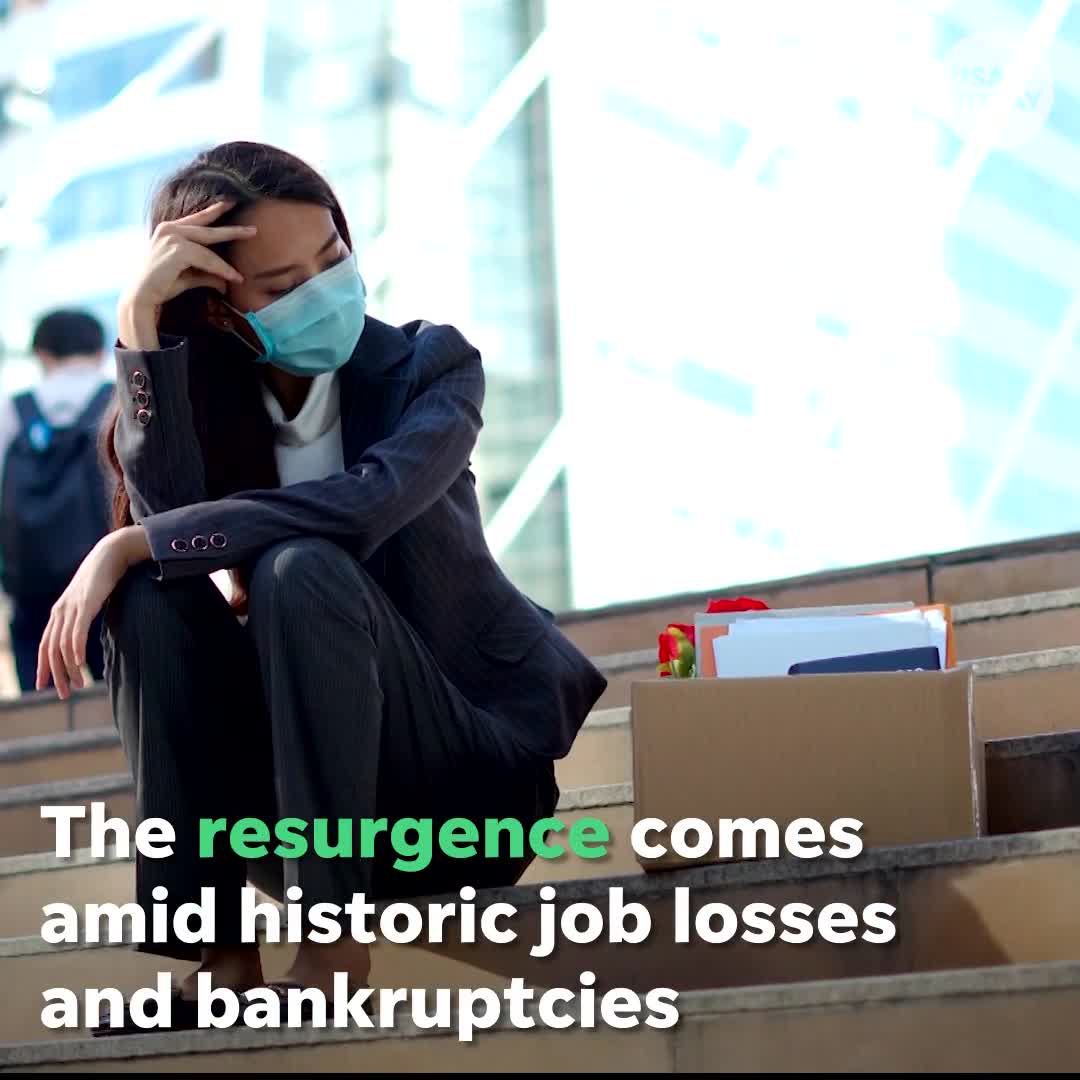