WASHINGTON — Rep. Pramila Jayapal got a one-word text from her mother Maya Jayapal when Sen. Kamala Harris was announced as the Democratic vice-presidential nominee.

An uncle texted her about the connection between her great aunt P.K. Devi, and Harris’ aunt Sarala Gopalan, who studied under Devi in medical school.

The flood of texts from her family has not let up.

The California senator’s first name, which means “lotus” in Sanskrit, has cascaded across social media and spilled into Indian family WhatsApp message groups since Joe Biden, the presumptive Democratic nominee, announced her as his running mate Tuesday. An emotional video of a tear-filled Harini Krishnan, an Indian American on the Biden campaign, percolated online while a 2019 video of Harris making dosas, a south Indian dish, with comedian Mindy Kaling again went viral on Twitter.

Her bid marks a milestone not only as the first Black woman to appear on a major party ticket, but also as the first Asian American person tapped to do so.

Harris, the daughter of an Indian mother and Jamaican father, has jolted an outpouring of support among Indian Americans, the second largest and one of the fastest growing immigrant groups in the U.S. who could play a crucial role in helping Biden clinch key battleground states in November.

‘Battle for the soul of the nation’: Before they were running mates, Joe Biden and Kamala Harris both used slogan

Her candidacy is the culmination of an increase of Indian Americans in the political landscape, including the rise of several congressional lawmakers like Jayapal, Rep. Ro Khanna, D-Calif., and Rep. Raja Krishnamoorthi, D-Ill. who were elected alongside Harris in 2016.

Krishnamoorthi said Harris’ role on the ticket and the increasing number of Indian Americans in Congress showed the community’s growing power and was part of a “natural progression” as the community established themselves in the United States. There are now enough Indian Americans in Congress – four in the House in addition to Harris in the Senate – to have a “samosa caucus,” he joked.

But Indian Americans have expanded their reach beyond politics, with population growth in pivotal states that could determine the outcome of November’s election. The populations of Asian Americans and Pacific Islanders in the closely contested states of Arizona, Florida, Michigan, North Carolina, Georgia and Texas have grown more than 40% between 2012 and 2018, according to AAPI Data and the nonpartisan advocacy group AAIPVote. Indian Americans make up the largest share of Asian-Americans in each of those states.

“Those are the places with significant enough Indian populations that they could make a difference,” said Karthick Ramakrishnan, a political science professor at the University of California, Davis who runs the AAPI Data survey of Asian American attitudes.

President Donald Trump narrowly defeated Hillary Clinton in 2016 by fewer than 80,000 votes in Pennsylvania, Wisconsin and Michigan to secure the 46 electoral votes that handed him a 304-226 victory. But in recent months, national polls have put Biden ahead of Trump in all three states, raising the question of whether Harris’ name could galvanize Indian Americans and other immigrant groups to turn out.

Tom Perez, chairman of the Democratic National Committee, emphasized that Indian Americans and AAPI voters could be a “difference maker” at a recent event for AAPI Victory Fund, a super PAC that supports Asian American candidates and endorsed Biden. Biden, who has a page dedicated to the AAPI agenda on his website, is set to deliver remarks at the super PAC’s event celebrating India’s Independence Day on Saturday.

Rep. Judy Chu, D-Calif., chairwoman of the Congressional Asian Pacific American Caucus, said having Harris on the ticket and rising Asian American turnout means the voting bloc “can go from being marginalized to the margin of victory.”

Democrats said they are excited about what Harris’ selection means for down-ballot races, too. Many of the most competitive races were in districts that have large populations of Asian Americans, and South Asian Americans in particular.

The race for the House: ‘It’s affecting every single bit of my job’: Coronavirus, police reform create hurdles

“Having Kamala Harris on the ticket as VP makes clear that all of our communities can have a seat at the highest table in the land, and a pivotal role in charting its future,” he said.

In Texas’ 22nd Congressional District in the south-central suburbs of Houston, for example, close to one-fifth of the district is Asian American, and about 40% of the Asian American population is South Asian American.

The campaign of Sri Kulkarni, the Democrat vying for the seat, expected to see a  “historic number of South Asian voters heading to the polls,” according to campaign manager Allen Chen.

But Republicans argue that adding Harris doesn’t change much for the political map. Harmeet Dhillon, a San Francisco lawyer and a national co-chair of Women for Trump, pointed out that Indian Americans tend to live in large population centers like New York, New Jersey, California and Chicago – cities located in Democratic-leaning states that aren’t in play.

“I don’t see how adding Kamala Harris to the ticket helps at all,” Dhillon said. “Maybe marginally in places like Texas or other Republican states, but it isn’t very many votes.”

Indian Americans living in the U.S., about 4 million or 1.5% of the population, have historically been some of the strongest Democratic voters, with 77% of Indian Americans voting for Hillary Clinton in 2016. Many are highly educated and affluent with an average household income of $107,000 – nearly double the income of American-born households – making them an attractive donor pool.

“Indian Americans plan to raise substantial amounts of money for the campaign and that is happening as we speak,” said Rangaswami, who has known Harris since she was California’s attorney general and has donated to her campaigns.

He points to the millions raised by Indian Americans in the Democratic primaries for candidates including Harris, Biden, Sen. Cory Booker, D-New Jersey, and Rep. Tulsi Gabbard, D-Hawaii.

“The sums are only going to get bigger now on both sides,” he added.

Republicans have also sought to appeal to Indian Americans over the last year. Trump’s appearance with Prime Minister Narendra Modi at last September’s “Howdy, Modi”  event brought 50,000 people to an arena in Houston and his whirlwind trip to India in February for a reciprocal event, “Namaste Trump,” shined an international spotlight on their friendship.

While Trump may have made inroads with the community by highlighting U.S-India relations, it was always going to be an uphill climb to win a large portion of Indian American votes. The voting bloc tilts toward the Democratic Party and the president’s immigration policies, such as the recent freeze on H1-B temporary work visas, are unpopular with Indian Americans, Ramakrishnan said,

“Harris’ nomination, I just think, puts it completely out of reach,” he said.

‘Her story is America’s story’

While introducing his running mate earlier this week, Biden highlighted Harris’ biracial background, an identity her supporters hope will resonate with America’s increasingly diverse demographic. The share of multiracial children in the U.S. has grown to 10% of the population, according to the U.S. Census.

“As a child of immigrants, she knows personally how immigrant families enrich our country, as well as the challenges of what it means to grow up Black and Indian-American in the United States of America,” Biden said. “Her story is America’s story.”

Harris’ mother, Shmayala Gopalan, emigrated to the United States as a 19-year-old student eager to earn her academic prowess at the University of California at Berkeley. It was there she met Harris’ father, Donald Harris, and was embraced by the African American community.

“My parents came from opposite sides of the world,” Harris said in her first remarks with Biden on Wednesday. “What brought them together was the civil rights movement.”

That movement also led to the 1965 Immigration and Nationality Act, which ended national-origin immigration quotas and opened the U.S. to an influx of Indians and other immigrants.

“If it hadn’t been for the civil rights movement and the push to open up immigration, I wouldn’t be here at all,” said Shekar Narasimhan, founder of the AAPI Victory Fund.

“We ride on the backs of the Black people who came before us and who fought those struggles so I feel like I owe them my heritage. So to have Kamala, this smart, biracial, proud woman, who can represent that all – that’s what America is about.”

“I think this opportunity for everybody to claim her in a different way is wonderful,” she said.

Race has played an outsized role in the 2020 presidential election. Not only did Democratic primary race feature the most diverse field of candidates ever – which included Harris – but voters will cast a ballot in November amid a national reckoning over racism after the death of George Floyd, a Black man, after a white Minneapolis police officer kneeled on his neck for nearly nine minutes.

Harris’ also faced scrutiny over her background in her first presidential bid, with some questioning whether she embraced her Indian heritage enough. Dhillon, the Women for Trump co-founder, revived that criticism when asked about enthusiasm for Harris in the Indian American community.

“From my observation of nearly 20 years, the only time we ever see her identify as Indian American is when she’s asking for money in a room full of Indian Americans at a fundraiser. And that’s harsh but it’s true,” she said. “It would be very different if she spent her career engaging with the Indian American community.”

But Rangaswami, a Harris donor, argued the national dialogue about race has evolved since her last turn in the national spotlight.

“I think the Black Lives Matter movement has moved the narrative from a question of ‘are you Black or are you Indian?’ to an understanding that she’s a woman of color,” he said. “I think there is a new kind of understanding within American society now and we can all start relating to her in that sense.”

The Best Back-to-School Tech Your Kids Need This Semester

Fri Aug 14 , 2020
Photo credit: Staff From Popular Mechanics For many families, the prospect of going back to school is still up in the air. Even if schools do open up again, some of us are still opting to keep our kids at home. But just because it may be the safest option […] 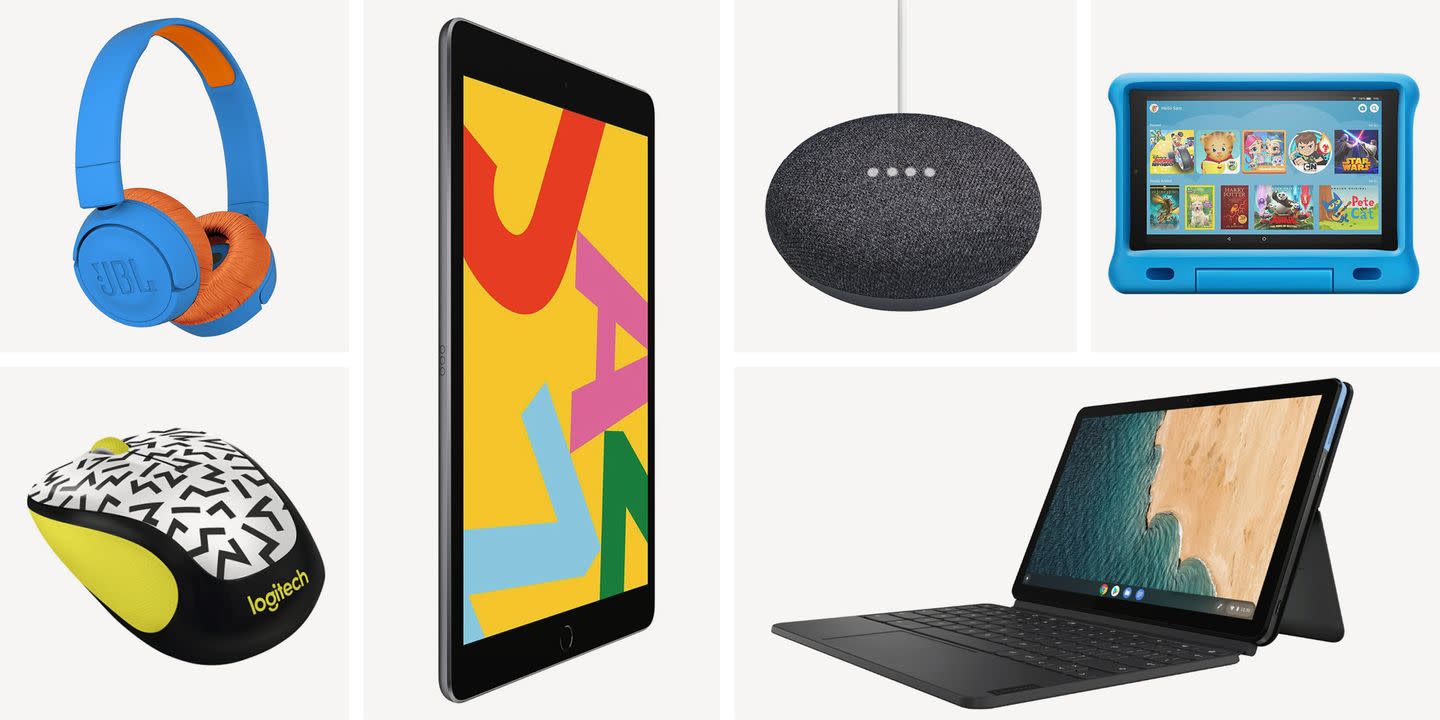