If your children are old enough to play with stuffed animals, they are ready to begin learning about racial diversity, experts say.

By 3 months of age, children are paying more attention to faces that match the race of their caregivers.

By 2 years old, they see people’s behaviors through the filter of race.

And around 5, they begin “internalizing society’s racial attitudes and organizing people by what they believe are dominant races or superior races,” Dr. Golnar Alamdari, Ph.D., a neuropsychology fellow at Nicklaus Children’s Hospital who specializes in multicultural awareness.

That’s why Alamdari, 29, said parents should begin dismantling those stereotypes early on by talking openly about race with their children.

Experts also suggest that having conversations about race and racial justice could safeguard children’s health by protecting them from stress-induced diseases that could develop as they move from childhood into adulthood.

“We know that (the experience of) racism is a form of stress, and repeated exposure to that stress can have a negative impact on children as they grow up,” said Dr. Kim Reynolds, 38, an assistant professor of clinical pediatrics at the University of Miami Health System, which has been raising awareness about the link between racial discrimination and physical illness.

An ongoing experiment in Baltimore found that people who reported having been discriminated against “a lot” had higher systolic blood pressure and higher declines in kidney function. Another study suggested a link between African Americans’ experiences of racial discrimination and hypertension.

Blacks are at greater risk for developing high blood pressure than whites, and the differences start in the 18-34 group, with 12 percent of the people in that group living with the disease, compared with 10 percent for whites, according to the Centers for Disease Control and Prevention. In the 50-to-64 age group, 61 percent of Blacks had high blood pressure, compared with 41 percent among whites, the CDC found.

Children on the receiving end of racism can start seeing themselves as “less than” from age 3, according to Reynolds. That can impact their school performance, their confidence levels and contribute to the school-to-prison pipeline.

But secondhand experiences can also have severe negative impacts on children.

Toddlers quickly pick up on current events and tensions and, as a result, can experience vicarious trauma, or share the pain of individuals they perceive as being hurt in their day-to-day lives or through TV screens.

“Even if they are not on the receiving end, they see what’s happening in society and that’s causing them anxiety because they do not know how to fully express themselves,” said Reynolds. “And that means they may also be internalizing racism or further perpetuating racism against fellow students and not even realize it.”

Reynolds and Alamdari said that in the aftermath of high-profile incidents of violence like George Floyd’s killing in Minnesota, parents will notice children becoming more irritable, shutting down or mirroring the discomfort of their household members when race comes up in conversation.

“These are all clues on how your child is processing this traumatic information,” said Alamdari. “And they are clues that we should all become more connected.”

For the little ones, this means introducing the concepts of race and diversity through play-based activities and smart purchases.

“Are they representative of all peoples, all shapes, all sizes, all hair textures?” asked Alamdari, who noted parents should ask themselves these types of questions before buying toys and books, or playing movies or cartoons on TV.

Talk to your child honestly

The language parents use with their children when discussing race will also shape their children’s understanding of how they and their peers fit into society.

“Don’t sugarcoat it because the child is younger,” Alamdari recommends. “Be open and honest. You’ll be surprised with how much they can say and how much they already know.”

Parents who have had “the talk” with their children also recommend approaching the conversation with a positive attitude.

Growing up in Texas, Corey Patterson said he was taught that being held at gunpoint by police for “fitting the description” for a crime committed by someone else in his vicinity was normal.

Patterson, 34, from Plantation, said his parents made sure that he understood that he had to act differently from his peers and “be more of a pacifist” because of the complexion of his skin. –

His parents kept him safe, he said, but they also instilled fear in him and he doesn’t want to do the same with his 19-month-old son Cole.

A message to their sons —You are loved and smart, but you must fight for racial justice

“And I want to let him know that through his actions he can eliminate racism day by day… with empathy and sorrow. It’s unfortunate for anyone to live with that level of ignorance and I’m training him to learn to guide some people away from the ignorance of racism.”

So every night before bed, Patterson asks his son to repeat after him, “I’m a king. I’m strong. I’m smart. My daddy loves me.”

‘The appearance of impropriety’

Destinie Baker Sutton, a former special prosecutor for the organized crime unit of the Palm Beach County State Attorney’s Office who is now in private practice in West Palm Beach, said she takes a similar approach to educating her 5-year-old about racism, focusing on awareness, safety and decision making.

When Sutton and her son are at the store, she said she teaches her son to be aware of his surroundings, never carry large bags and always ask for a receipt.

“I have to make sure that we don’t have what we call in the legal profession ‘the appearance of impropriety,’ that it doesn’t look like we’re stealing,” she said.

But “as a mom of a Black son, I understand that there’s a critical balancing act where you want to protect your child, but at the same time you don’t want your son to feel that they are an ‘other’ or ‘less than’,” she said.

Sutton said the first step toward that goal was making an informed decision about where her son went to school.

“Growing up, I went to schools where I was the only Black person or one of two or three,” she said. “So I wanted my son to have a public school experience with more diversity.”

When a child enters school

If children pick up racial biases from their peers, for example, she said parents should start open-ended conversations by asking questions such as, “Why do you think that?” or “What makes you feel that way?”

Alamdari said parents should also encourage their children to notice and celebrate differences they encounter in their day-to-day, rather than dismissing their awareness of color and racial differences.

“Colorblindness is an invalidation of the lived experiences of people of color,” she said.

Mandy Jesteadt, a shareholder at Carlton Fields, the Miami-based law firm and a member of the Women’s Foundation of Florida board of directors, said taking that next step with her 7- and 5-year-old sons “took a bit of a learning curve.”

As a “white child of the 80s,” Jesteadt said she was raised on the principles of colorblindness, but has come to realize that what she was taught was “equitable, is actually the opposite.”

When she became a mother, Jesteadt re-educated herself on the history of racial injustice to transmit sounder values of diversity and inclusiveness to her children.

“Once you’ve made the decision to have these conversations with your child,” Jesteadt said, “start with yourself. Make sure you are educated about the issues and make sure that you know your history because kids will ask you questions that you are not ready to answer.”

Reaching out to other families

Alamdari said parents should also be prepared to admit that they don’t have all the answers, especially when talking to teenagers.

Instead, they should take difficult questions as an opportunity to “do some introspective reflection” and seek out information with their children through documentaries, books or online resources.

Participating in peaceful protests and events where children can advocate for racial justice with their communities can also help increase parents’ awareness.

On June 3, Jesteadt and Takeata King Pang, the chief program officer for the Women’s Foundation of Florida, said they held the first of a series of family-friendly summer events dedicated to racial justice and equity.

Pang said they received an overwhelming response from parents and community members and put together their first Racial Justice Committee in collaboration with Black-led local organizations.

The foundation’s upcoming events can be found on its Facebook page.

“The more parents discuss these topics, the better our understanding will be of the real issues and the better we will be able to present them to our children,” Patterson said.

Tue Jul 21 , 2020
Denzel Washington tackles the 2000 role of coach Herman Boone in “Remember the Titans.” (Tracy Bennett / Buena Vista Pictures) With the CIF deciding to delay the start of the high school football season until Jan. 8 because of uncertainty and safety concerns over the COVID-19 pandemic, teens and their […] 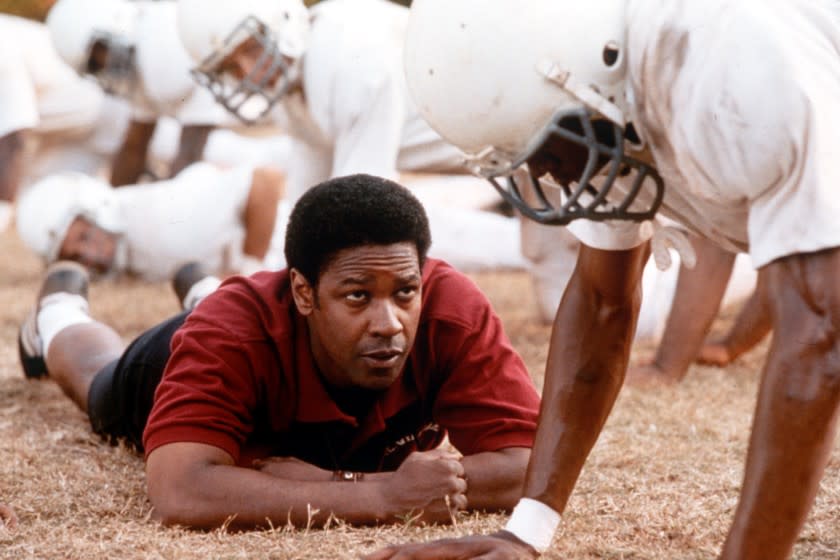