It’s 2011 and somewhere in the snow-capped depths of British Columbia Tom Cruise is strapped to the back of a sleigh, screaming. He disappears into a tunnel. It is dimly lit yet visibly crowded with over-sized figures.

A torch is switched on, Cruise points his gun at…a giant penguin with cataracts over its eyes. Lowering his gaze, his white teeth twinkling ominously in the gloom, he draws a breath and asks “Where the hell are we?”

So goes a scene from the greatest – or, at least, most deranged – film Tom Cruise never made. It was all supposed to have happened nine years ago when the world’s biggest matinee idol was still belatedly wriggling free of the cosmic horror that was the Oprah “Couchgate” scandal. With Cruise reportedly in search of a new franchise to patch up his reputation, he was touted as potentially starring in Guillermo Del Toro’s $125 million adaptation of HP Lovecraft’s 1931 novella At The Mountains Of Madness.

HP Lovecraft is inescapable at the moment, thanks to the new HBO/Sky Atlantic prestige horror series, Lovecraft Country. The father of 20th century horror is also a figure of considerable controversy thanks to a wider awareness of his viciously racist views.

However, in 2011 Lovecraft was still semi-obscure (his racism even more so). And Cruise was an actor who needed a gear-shift. His career had became becalmed after he pinged around on Oprah’s settee in 2005.

The incident irked Steven Spielberg, who felt his Cruise-fronted retelling of HG Wells’s The War of the Worlds had been overshadowed. And Sumner Redstone, boss of Paramount, had gone so far as to “fire” Cruise in August 2006 by ending the studio’s 14-year-relationship with the actor (one rumour was that the sacking was actually motivated by the huge cut Cruise was taking from Mission Impossible DVD sales).

It is true that Cruise had eventually clawed his way back. He and Redstone patched up their relationship and were working together again. He had meanwhile clocked up bonus kudos with tastemakers via his self-parodying turn as a Hollywood mogul in 2008’s Tropic Thunder (see, he had a sense of humour after all).

But, with the exception of the Mission Impossible saga, he wasn’t quite burning up the box office as he had through the Eighties and Nineties. He required a vehicle to restore the Cruise brand to its original pre-eminence.

For Cruise a mega-bucks take on one of HP Lovecraft’s greatest stories appeared to fit the bill. Del Toro had written the screenplay to Mountains of Madness in 2006 (in collaboration with Matthew Robbins). One of the Hollywood touches he applied was to transform the tale’s narrator, geologist William Dyer, into a dashing action hero. Admittedly, he was a fresh-faced 25 year old in the script, with a young wife and a baby on the way.

Cruise, by contrast, was 47. Still, he continued to radiate the gee-whiz magnetism of a perpetual puppy. And he was Tom Cruise. If he could strap himself to airplanes and the outside of skyscrapers, as he would making Mission Impossible films, he could pass for 25.

The star of Cocktail and Jerry Maguire doing horror was more of a stretch, it is true. But then Del Toro’s script, later leaked online, leaned unabashedly into the pulpier qualities of the expanded Lovecraft universe as manifested by properties such as the Call of Cthulhu tabletop game.

At the Mountains of Madness indeed featured mountains and madness. It was also well-stocked with thrilling shoot-outs, dashing underwater escapes and a death-defying chase scene in which Dyer and shotgun-toting husky wrangler Larsen outrun rubbery, body-snatching “Shoggoth” monsters.

Such was his eagerness to bring Lovecraft and his “Mythos” of warped deities to multiplexes, Del Toro had even broken with the original text and bunged in a cameo by Lovecraft’s most famous and tentacled creation of all. Tom Cruise versus Cthulhu could so very easily have happened, then. Just imagine how much richer human civilisation would have been if the stars had aligned and it had indeed come to pass.

Obviously it didn’t. The reasons are both straightforward and complicated. The simple explanation is that neither Warner Brothers nor Universal – the two studios attached to the project – was ultimately willing to invest $125 million in a gory horror caper. Del Toro, who had already flirted with Lovecraftian tropes with his Hellboy films, was well aware of this.

“It’s very difficult for a studio to take the step of doing an R-rated tentpole movie with a tough ending and no love story, set in period, from a writer, Lovecraft, who has a readership as big as any bestseller but cannot be quantified because his works are in the public domain,” he would tell Collider.

That said, At The Mountains Of Madness wasn’t simply a haunted house tale. The original story reads like Indiana Jones with an Antarctic setting – and, yes, several stomach-churning set pieces. Hero Dyer is part of a South Pole expedition which stumbles upon an ancient race of geometric beings who have seemingly constructed a vast alien city high in a previously undiscovered range of mountains.

The same alienoid creatures are apparently long gone by the time the explorers, from the Mistaktonic University of Lovecraft’s fictional city of Arkham, arrive. What happened to them? The answer is horrific. Millennia previously their slave creatures, the Shoggoths, rose up and threw down their masters. And they’re still very much on the scene.

So it’s an epic yarn – expensive to film yet, but with the potential for real Spielbergian sweep. Del Toro knew how to package Lovecraft for the masses, too. His script retains the existential horror of the source material whilst chucking in lots of big action sequences. And he gives enhanced screen time to the giant blind penguins Lovecraft briefly mentions in (think of the merchandising opportunities: they could have been their generation’s answer to Baby Groot from Guardians of the Galaxy).

He toiled on his passion project for several years after returning from New Zealand, where he had been set to oversee the Hobbit films until suddenly he wasn’t (Lord of the Rings director Peter Jackson took over, with notoriously underwhelming results). Back in Los Angeles, concept art was created along with scale models of the big beasties – including the monstrous, shape-shifting Shoggoths.

There was a further boost when Del Toro’s friend James Cameron came on board as producer. And then Cruise read the script and expressed an interest in hero Dyer (shunting aside Del Toro’s first pick of James McAvoy). Nothing is certain in Hollywood – but this had the feel of lightning captured in a bottle. Not even the fact that portions of the screenplay read like undigested outtakes from John Carpenter’s 1982 classic The Thing seemed to pose an impediment (Carpenter had clearly been inspired by Lovecraft anyway).

Del Toro had by that point even walked back from his assertion that Mountains of Madness absolutely had to be chock-full of gore and violence. He indicated that he was open to doing it as a PG-13 romp, the ickiness largely off screen. Potential filming locations had been identified in British Columbia, with several weeks of additional shooting to take place in Antartica itself. In early 2011, James Cameron seemed enormously positive.

“Tom does want to do the picture,” the director of Avatar and Titanic told MTV News. “I don’t think we have a deal with him yet, but we’re hoping to get that closed soon. Guillermo is madly working on a new draft of the script. Hopefully we’ll be shooting by June or July.”

Yet within a few months the project fizzled out and Del Toro made his robots v monsters action flick Pacific Rim instead. What happened? The one word answer is “Prometheus”.

Ridley Scott’s 2012 Alien prequel covered territory similar to Mountains of Madness with its story of monastic aliens in a remote location destroyed by their own creations. So it got there first. Worse yet it was a critical and commercial disappointment, leaving Universal to ponder whether there was an audience for two cosmic horror blockbusters in as many years.

There were also whisperings at the time that Cruise’s involvement in a movie about aliens guiding human destiny from the depths of time might draw uncomfortable attention to Scientology, of which he remains the best known advocate.

“Scientology and Lovecraft share eerie parallels,” wrote author Jason Colavito on his blog. “Lovecraft’s (fictional) extraterrestrials came to earth in the distant past and had a profound and largely dark influence on early humanity… and this idea bears a resemblance to Operating Thetan Level III (OT-III), the (supposedly nonfictional) cosmological doctrine L. Ron Hubbard created circa 1967 for Scientology. Lovecraft’s version, to my mind, is the more subtle and convincing of the two.”

It’s pure speculation but Cruise would no doubt have been aware of the opprobrium weathered by fellow scientologist John Travolta following his adaptation of Hubbard’s Battlefield Earth in 2000. Even the names HP Lovecraft and L. Ron Hubbard have a similar chime. Throw in extraterrestrials and elaborate creation mythology and it feels certain that – however unfairly or inaccurately – Cruise’s beliefs would be publicly linked to Lovecraft’s cosmology. The plug had already been pulled so the decision wasn’t his to make. But might he have ultimately had cold feet?

We’ll never know as At the Mountains of Madness went into a deep freeze. Del Toro’s love for all things Cthulhu would persist with the aquatic hero of the Oscar-winning The Shape of Water at least partly inspired by Lovecraft’s Deep One race of “fish-men”.

Cruise, for his part, attempted to conjure new franchises with his Jack Reacher movies and 2017’s disastrous The Mummy. He’s still clearly desperate for something to do other than make Mission Impossible films, as demonstrated by the forthcoming sequel to 1986’s Top Gun.

Could At the Mountains of Madness have elevated him to the peak of the action genre? It is one of recent cinema’s great imponderables. What is certain is that Cruise against Cthulhu is not a blockbuster anyone would have forgotten in a hurry. Tom in “Top Tentacles” truly could have taken our breaths away.

In the work-from-home battle for space, women are the reluctant nomads

Mon Aug 17 , 2020
Ward Cleaver of the popular sitcom ‘Leave It to Beaver’ in his study. Universal Pictures It’s just past 10 a.m. and my partner, on his third virtual meeting today, is working non-stop in our home office. My son has taken over the family room to attend a virtual science camp […] 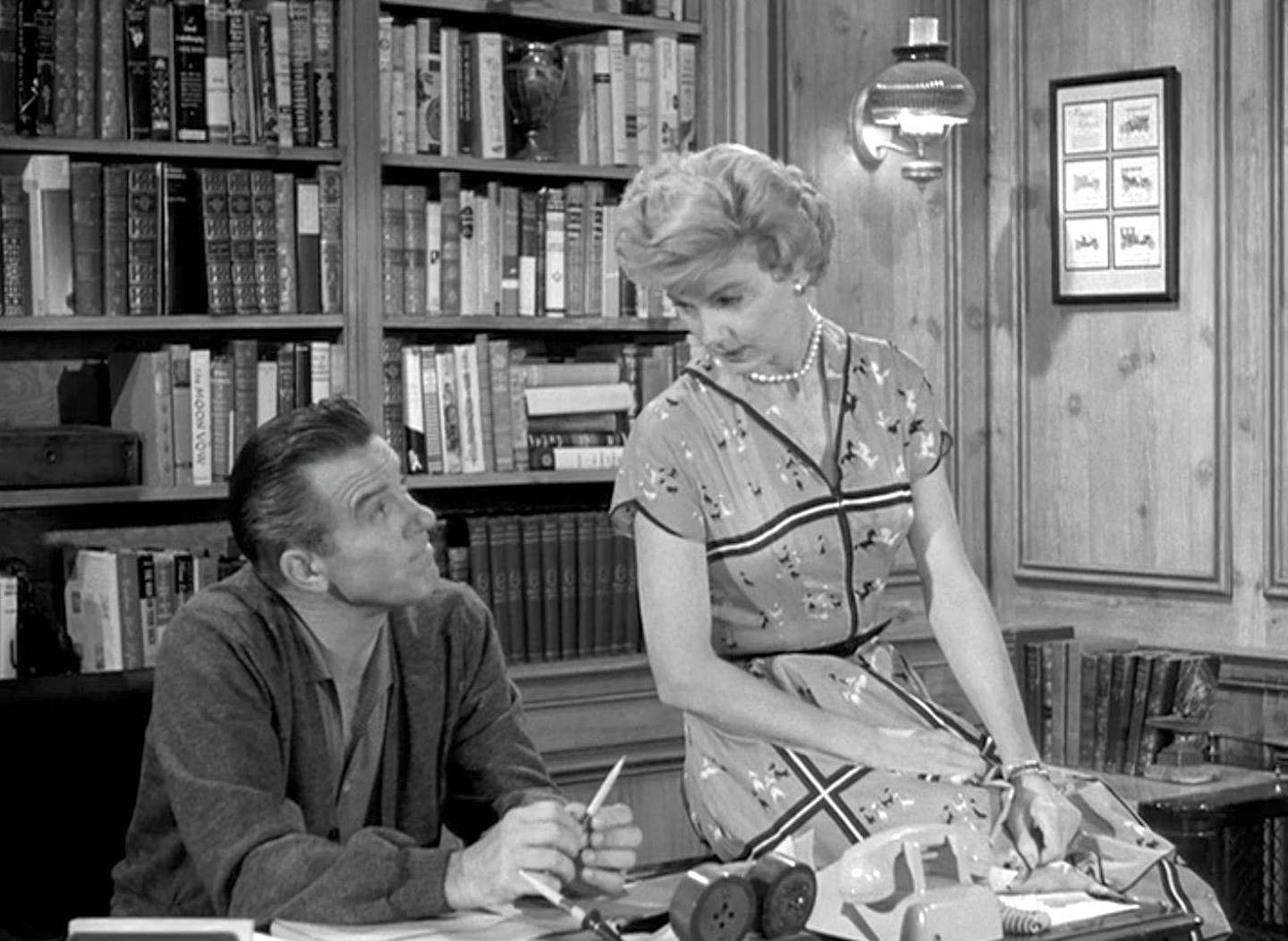