Another pharmaceutical giant announced a vaccine deal with the U.S. on Wednesday, and a second round of coronavirus stimulus checks could soon be in the mail.

While the nation waits for a vaccine that could fully reopen schools and businesses, Democrats and negotiators from the White House say another stimulus deal could be reached by the end of the week. That could be good news for tens of millions of unemployed Americans whose $600 weekly boost in unemployment benefits has expired.

📰 What we’re reading: Kids are less likely to die from the coronavirus. But some experts say a lack of information about how they contract and transmit COVID-19 will leave the nation unprepared when schools reopen.

One of the first cruise ships to resume overnight sailing in U.S. waters since the coronavirus shut down the cruise industry has reported one case of COVID-19. Passengers are quarantining on board UnCruise Adventures’ Wilderness Adventurer “until the State of Alaska deems it safe for them to return home,” according to a travel alert posted on the cruise line’s website. The ship was able to bypass the federal no-sail order because its capacity is less than 250 passengers and crew.

“The guest is showing no symptoms and no other guests or crew are showing outward symptoms of any kind,” the cruise line said. “All guests have been informed and will quarantine until the State of Alaska deems it safe for them to return home.”

Johnson & Johnson announced a deal with the U.S. government for 100 million doses of its SARS-CoV-2 vaccine candidate, Ad26.COV2.S, for use in the United States – if and when the vaccine wins Food and Drug Administration approval. The government may also purchase an additional 200 million doses, the company said in announcing the $1 billion deal. A clinical trial is underway, and the company said it is evaluating one- and two-dose regimens. The plan is to provide more than 1 billion non-for-profit doses globally through the course of 2021.

“We are scaling up production in the U.S. and worldwide to deliver a SARS-CoV-2 vaccine for emergency use,” said Dr. Paul Stoffels, Johnson & Johnson’s chief scientific officer.

More than 500 inmates at the Arizona State Prison Complex Tucson Whetstone Unit have tested positive for COVID-19, authorities said. The 517 inmates, almost half the unit’s population of 1,066, are being housed together in separate areas and receiving medical care, according to a statement released by the Arizona Department of Corrections, Rehabilitation and Reentry. The department did not immediately respond to questions, including when tests were performed and whether every inmate there was tested. The tests came after inmates at the Whetstone Unit staged a peaceful walkout last week due to virus concerns.

Moderna in talks with ‘several countries’ for vaccine candidate

Biotech giant Moderna said Wednesday it expects to fully enroll 30,000 volunteers in the crucial Phase 3 study of its COVID-19 vaccine next month. Moderna’s vaccine candidate, backed by almost $1 billion in federal funding, last week became the nation’s first to begin such a large trial. It’s being tested at scores of sites in the U.S., with results expected as soon as October.

“We began discussions with several countries for supply agreements for (vaccine candidate) mRNA-1273 and as of July 31, we have received approximately $400 million of customer deposits for potential supply,” Moderna said in a statement.

Top Democrats and White House negotiators expressed optimism Tuesday that a deal on another coronavirus stimulus package could be done by the end of the week. The movement followed House Speaker Nancy Pelosi, D-Calif., and Senate Minority Leader Chuck Schumer, D-N.Y., meeting for another day with Treasury Secretary Steven Mnuchin and White House Chief of Staff Mark Meadows.

“Even though there remains a number of unresolved issues, I would characterize the conversations as productive and a step in the right direction,” Meadows said after the meeting. “Probably the most productive meeting we’ve had.”

By the numbers: Record deaths in California, Florida, Georgia

A USA TODAY analysis of Johns Hopkins data through late Tuesday shows one state set records for new cases in a week while three states had a record number of deaths in a week. New case records were set in Hawaii, and also Puerto Rico. Record numbers of deaths were reported in California, Florida and Georgia. The United States has reported 4,771,080 cases and 156,801 deaths.

Shortage of Clorox disinfecting wipes could stretch into 2021

Although Clorox officials said in May that they expected retail shelves to be stocked by this summer, they now anticipate it will take longer.

Linda Rendle, president and CEO-elect of The Clorox Co., says it could take until year’s end to reach supply levels “that we need to be at.” Rendle and Clorox CEO and chairman Benno Dorer said the demand for the company’s disinfecting wipes has outpaced expectations and isn’t expected to slow.

“We’re certainly not at all happy with our service levels for our retail customers on many products, as demand for our products exceeded our own expectations in the face of this persistent pandemic,” Dorer said during the call. “We have a high sense of urgency on this with all hands on deck.”

There’s a chance four Station Casino resorts in Southern Nevada have closed for good. Frank Fertitta III, CEO of Station’s parent company, Red Rock Resorts, revealed in an earnings call Tuesday the company is uncertain whether Texas Station, Fiesta Henderson, Fiesta Rancho and the off-Strip Palms will reopen in the wake of COVID-19.

“We don’t know if — or when — we’re going to reopen any of the closed properties,” Fertitta said. “We think it’s too early to make that decision at this time.”

The Walt Disney Company lost nearly $5 billion April, May and June, while its theme parks were shut down due to the coronavirus pandemic, according to a presentation Disney executives made Tuesday. It cost the company $3.5 billion just to close the parks during the third quarter, on top of the $1 billion it cost to shut them down the second half of March.

In all, the company posted a loss of nearly $5 billion for the third quarter, including a $2 billion loss in its parks, experiences and products segment. Disney’s domestic parks – Disney World and Disneyland, as well as Disneyland Paris, resorts and cruise operations were closed for the entirety of the quarter and the final two weeks of the previous quarter.

“This is obviously a very uncertain time,” CEO Bob Chapek said during an earnings webcast Tuesday. “We should be in good shape once consumer confidence returns.”

One of the first school districts to reopen in Georgia confirmed its first COVID-19 case a day after they opened for the 2020-21 school year. Columbia County School District Superintendent Sandra Carraway said in an email that a student at Harlem High School who was previously tested as part of a pre-op process received positive results.

“Because the Columbia County School District has 3,400 employees and more than 20,000 students, unfortunately it can be expected that there will be instances of positive cases of COVID-19, hopefully on a very limited basis given expectations of our Collective Responsibility agreement,” Carraway said.

In her email, Carraway asked families to not send their children to school if they have been tested for the virus until test results are returned and are negative.

The number of COVID-19 infections in California may not be accurate due to a technical problem in the state’s system that tracks positive results and conducted tests, a top state health official said Tuesday.

On Monday, California Gov. Gavin Newsom reported that daily cases dropped by an average of 2,200 in the last week and the infection rate of 6.1% was significantly lower than the nearly 8% recorded last month.

As private preschools prepare to reopen, California's poorest kids are stuck at home 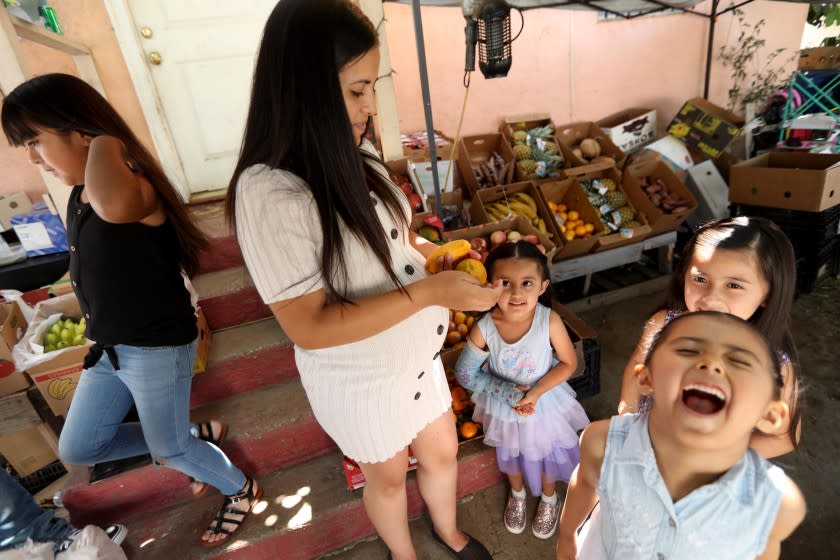