“Making the Cut” winner Jonny Cota knows something about one of the industry’s most burning questions: Is Amazon really interested in fashion?

“It’s tricky…” said the Los Angeles designer outside his retail store opening Aug. 1 at Row DTLA, which will be the exclusive brick-and-mortar store carrying the Jonny Cota Studio “Metamorphosis” collection that launched in April on Amazon after he won the fashion reality competition series and $1 million prize.

“Customers today are responding more to a lifestyle element, the way things are shot, getting rid of the white background, showing a little more realness, and Amazon is not there,” he said, while acknowledging Amazon’s systems (at least pre-pandemic) are exceptional. “Right now, guidelines are very strict, every background needs to be white, there can’t be a single accessory unless the thing is sold in the photo. This caters to an Amazon customer, but fashion people are not resonating with that. So I’m hoping there is a middle ground that’s found. And I feel like I’m the guinea pig to see how you court that customer, and show lifestyle but while still selling them a denim jacket.”

One way to court them — he’s hoping — is with a “pandemic-proof,” phy-gital store that lets customers shop a gallery-like space via a virtual tour or in real life, using their phones and QR codes as a guide to scan styles, see them on a model, and add them to a digital cart that can be shipped or fulfilled on-site.

Although it’s modeled after the pop-up Cota created during an episode of “Making the Cut,” the 1,500-square-foot store complete with Instagrammable butterfly installation is not being funded by the online behemoth. But Amazon Fashion has extended its mentorship of Cota through the end of the year, including producing a second collection for the designer, whose initial deliveries and inventory were impacted by the pandemic. (The mentorship was initially due to end this fall, a year after the show wrapped shooting.)

“They feel the brand is doing well, and customers are responding well, but the collection after the finale is a flash in the pan,” said Cota. “How can they show longevity? Because a lot of these shows haven’t shown that with the winner. They know if I do well, they’re going to do well.”

The store experience starts at the front door, where scanning a QR code launches a friendly welcome video by Cota that’s reminiscent of John Hammond’s from the film “Jurassic Park,” educating shoppers about the concept and rules (“Please remember to practice social distancing and don’t forget to wear your mask!”)

On Aug. 1, Cota is also launching a perfume and candle (inspired by Bali, where he does his production), and re-branding his web site and social media channels under the name Jonny Cota, rather than Skingraft, the name of his 15-year-old niche streetwear label that was critiqued by Heidi Klum on the show.

Cota’s existing business experienced a halo effect from the show to the tune of a 500 percent increase in sales from March to June; that has since settled to a 250 percent increase year-over-year, said the designer, who also gained 70,000 followers on Instagram since the premiere. But he believes his future is with the more accessible Jonny Cota brand on Amazon.

“Jonny Cota is only three months old, and already it has more momentum than Skingraft did after 10 years,” he said. “We had been very niche so our followers were niche, and they’ve been awesome. But to launch a brand that has greater aspirations, that wants a wider audience, we didn’t have the connection to people who were listening.”

Even with the online giant’s might, production and fulfillment for the “Metamorphosis” collection that landed on the site April 24 didn’t go as smoothly as it should have. (Of course, no one could have predicted a pandemic would hit, putting unprecedented pressure on Amazon’s infrastructure.)

Cota and Amazon declined to share figures, but the initial production run was so limited, many styles and sizes were available only for preorder, with a July delivery. “Launching a new brand with no inventory, it was a struggle,” said Cota.

Once customers did receive their items, some were frustrated by the quality — and let it be known in Amazon’s comments section. “Designer clothes not on par with designer clothing quality,” read a one-star review of a jumpsuit.

Some counterfeit “Metamorphosis” logo sweatshirts even made it onto the site, and shipped. “The sweatshirt was delivered but it was very clearly a knock-off,” wrote one customer. “Halloween costume cheap,” wrote another.

The Amazon team was alerted of a bad seller and took swift action, according to the retailer. “Amazon strictly prohibits counterfeit products and investigates any claim of counterfeit thoroughly, including removing the item, permanently removing the bad actor, pursuing legal action, or working with law enforcement, just as we have here,” an Amazon spokesperson told WWD.

The style was still a bestseller, Cota said, noting 2,000 of the sweatshirts were sold.

Others felt that despite Cota learning during the show that he needed to broaden his vision to go from Goth niche brand to mass, he didn’t go far enough, sizing only from XS to XL, for example. “The sizes are very junior,” wrote one. (Cota’s next collection will go up to XXL, he said.)

“I’ve been doing this for a long time, and you either get a good review or a medium review or no review, from my runway show experience,” said Cota, who started out making costumes for a San Francisco vaudeville circus troupe (he himself was a stilt walker) before launching his fashion business in 2005 with a collection of leather jackets made from vintage remnants (hence the name, Skingraft). “I rarely get, ‘This jacket sucks.’ And it was an eye-opener.…But I feel like it is super valid in terms of the future. Even before Amazon, we thought we should put review capabilities on our site. I don’t go out to dinner at a restaurant unless I can see on Yelp if it’s good. So why should we treat fashion any differently?”

He’s grateful for the customers he did have in such a difficult time.

“I was very impressed people were still buying.…I wouldn’t buy something that would come two months later. But people’s patience wore thin, and that feeds into negative reviews. Now I feel we’re in a good spot; you’ve either received your item, gotten a refund or we’ve reached out and got you something different. Now, I see why Amazon wants to continue the mentorship because it was such a unique situation launching the brand, let’s see if it holds up, and how we can apply the things we’ve learned in a more normalized market.”

(Indeed, it might be interesting to see some Amazon Studios content around this moment, too, now that so many designers are trying to figure out how to keep making the cut, so to speak.)

The value of storytelling in commerce is a common discussion point.

“Amazon keeps pressing me to stop thinking about it as collections and start thinking about it as items; I feel the Amazon customer is just looking for a dress or a shoe, they are not as trained to look into the story or campaign, and that’s how I like to bring my collections to life,” said the designer, who recently posted to Instagram a virtual tour of his stylish Goth cabin in Lake Arrowhead, Calif., that was in many ways more aspirational and revelatory than any of the Amazon content around him on the show. “But we’re finding a middle ground; in the mentorship we are constantly talking about how do you cater to a customer doing product-based instead of collection-based searches.”

Though the relationship will be ending in 2020, and Amazon still has an online casting call posted as if there will be a second season of “Making the Cut,” with a whole new crop of designers, Cota will still continue to sell on the site and not wholesale otherwise. “It would be a waste of our time and investment to pull the brand from Amazon. Let’s keep it there, continue to release products that are accessible for as long as it’s successful,” he said.

Hiccups aside, he is determined not to be another casualty of the fashion reality show medium like so many who have come before him.

“I feel like I’m in a unique position winning ‘Making the Cut’ because I have been in the industry for so long. My aspirations are different than if I was just starting my career. Designers mainly get on these shows, they want to launch their brand, and they hope it will turn into a life of being in fashion. But I’ve had a lot of those exciting moments fulfilled, so now I’m looking for a second wind.…I want to make a little money, I want to launch my new brand, I want to start a family…”

Cota was given favorable leasing terms to remain at Row DTLA, where he had a previous store in another location, and knows it could be slow going for a while. The mixed-use retail and office center has not been immune to the pandemic’s devastation. Only about half of the stores and restaurants are open, and the popular weekly food market Smorgasburg is a no-go for now.

But he is hoping his fans will come out — in person or online. While there won’t be an opening party, he will be on hand to meet them (six at a time are safely allowed into the store), and keep office hours at the store three days a week.

“Something I learned when we closed the Skingraft store on Spring Street in downtown L.A. is my presence is more necessary than I thought. I had a little ego about not being there, not being present, it’s kind of the fashion way.…But I think the customer that visits Jonny Cota is going to appreciate my presence.”

His path won’t mean playing by the same-old fashion rules. “I could give two cents about fashion week these days, and I think that’s a general feeling in the industry,” said the designer, who has shown in both New York and L.A. “People are looking for something different; we are supplying that difference with the store, and hopefully we represent it powerfully enough online that you get the same sense as visiting,” he said of the assortment, including blanket ponchos, motocross denim and Victorian-inspired poet dresses alongside Skingraft by Jonny Cota leather jackets and “Make America Goth Again” hats, all priced under $600.

“The respect level around being on a TV show from the fashion industry is questionable. But I don’t care about being in fashion’s VIP club anymore. I have reached my own version of success, and I feel pretty fulfilled about that.”

Founder Hits Jackpot Thanks to China’s Love of Stock Trading 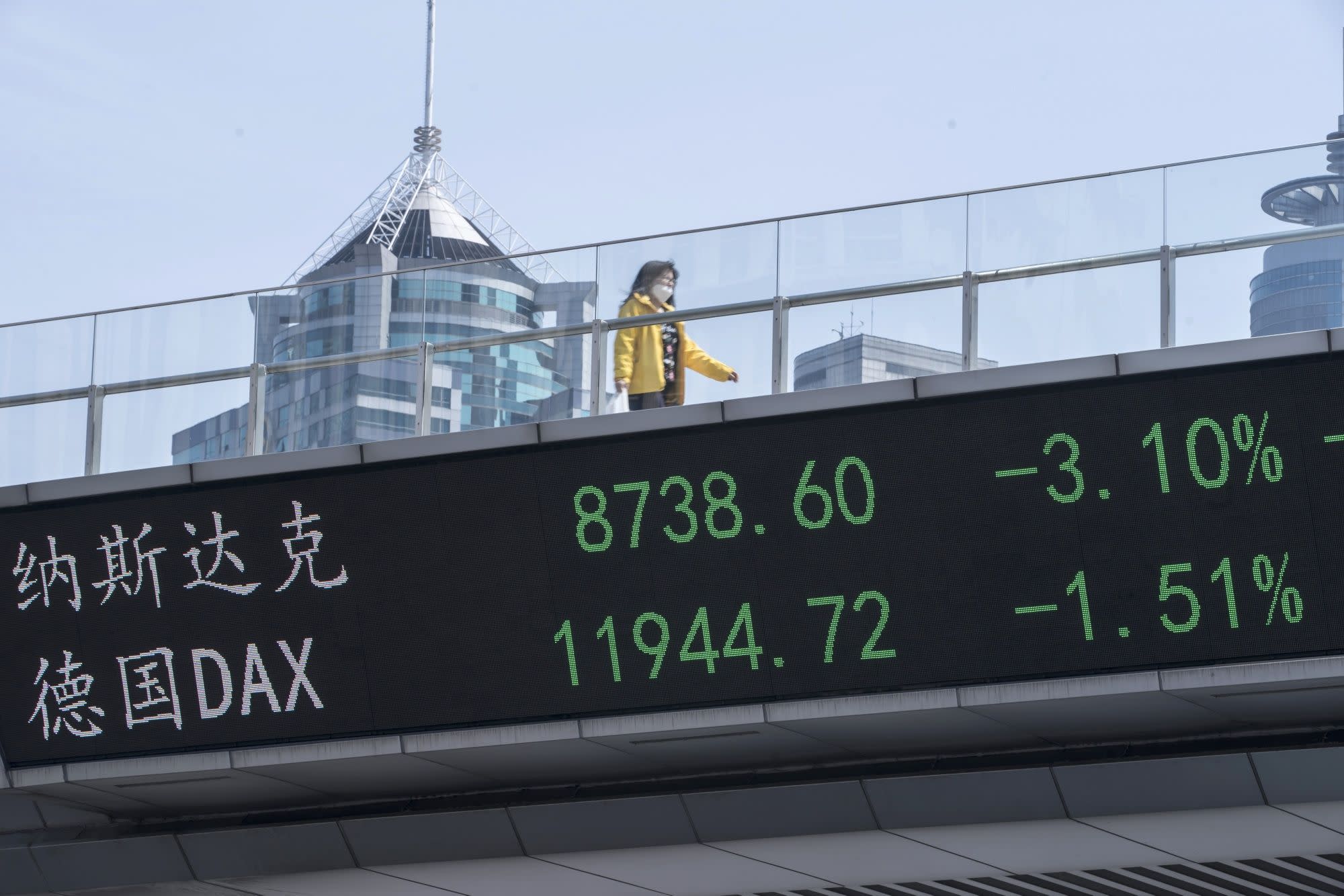