Kamala Harris, a California senator and daughter of immigrants who has broken racial barriers at every step of her political career, made US history on Wednesday night as she became the first Black woman and first Asian American to formally accept a major party’s vice-presidential nomination.

In the most consequential speech of her career to date, Harris urged voters to reject the divisive and destructive leadership of Donald Trump, calling him a president who “turns our tragedies into political weapons”.

“We’re at an inflection point,” the 55 year-old said, speaking from a waterfront convention center near Joe Biden’s home in Wilmington, Delaware.

“The constant chaos leaves us adrift. The incompetence makes us feel afraid. The callousness makes us feel alone,” she continued. “It’s a lot – and here’s the thing: we can do better and deserve so much more.”

Harris’s sister Maya, her niece Meena, and her step-daughter Ella Emhoff offered their praise of Harris as she was formally nominated, and her address introduced Harris to a nation still largely unfamiliar with the California senator.

Moments before she spoke, Harris stood at a darkened podium as a technician checked the sound. She took a deep breath. The cameraman counted down to zero and the lights above her illuminated.

Born in 1964 to Shyamala Gopalan, an Indian-born American cancer researcher, and Donald Harris, an American economist from Jamaica, Harris recounted their political activism and said that some of her earliest memories were of attending civil rights protests as a toddler.

She described her family – both the one she was born into and the one she created – as foundational to her life and career, bringing some Indian-American women watching at home to tears with a mention of her chithis. Acknowledging the weight of nomination, she invoked her mother, along with the names of Black, female civil rights leaders who helped pave the way: “We all stand on their shoulders.”

“My mother taught me that service to others gives life purpose and meaning. And oh, how I wish she were here tonight but I know she’s looking down on me from above. I keep thinking about that 25-year-old Indian woman – all of five feet tall – who gave birth to me at Kaiser Hospital in Oakland, California,” she said.

“On that day, she probably could have never imagined that I would be standing before you now speaking these words: I accept your nomination for vice-president of the United States of America.”

In her remarks, Harris also delivered a biting rebuke of Donald Trump, or, as she calls it, “prosecuting the case” against the president of the United States.

She said: “Donald Trump’s failure of leadership has cost lives and livelihoods. If you’re a parent struggling with your child’s remote learning, or you’re a teacher struggling on the other side of that screen, you know that what we’re doing right now isn’t working.

Her speech threaded together the two major arguments Democrats have advanced across their four-day convention: that American democracy hung in the balance – and that voters must mobilize in historic numbers ahead of the November election to ensure not only that Trump is denied a second term but that Democrats take control with a governing mandate.

“It’s not about Joe or me. It’s about you. It’s about us,” Harris said. “People of all ages and colors and creeds who are, yes, taking to the streets, and also persuading our family members, rallying our friends, organizing our neighbors, and getting out the vote.”

As Wednesday’s event began, Harris gave a brief direct-to-camera speech about the importance of voting in November’s election. She said she knew many of the viewers may have “heard about obstacles and misinformation, and folks making it harder for you to cast your ballot,” offering implicit criticism of Trump.

Harris, only the fourth woman in history to be nominated for a presidential ticket, shared a virtual stage – one hundred years and one day after the ratification of the 19th amendment that guaranteed the women – with Hillary Clinton, the first woman nominated by a major party for the presidency, and Nancy Pelosi, the House speaker and highest ranking woman in American political history.

After graduating from Howard University, a historically Black college in Washington DC, Harris pursued a career in criminal justice. In 2003, she was elected district attorney of San Francisco and the attorney general of California before becoming only the second Black woman to serve in the Senate.

It is this chapter of her career that Harris struggled to reconcile during her own presidential campaign, when confronted by progressives over her record as a prosecutor.

But on Wednesday, Democrats mostly celebrated her historic ascensions. Harris’s presence on stage Wednesday was not preordained.

During the first Democratic primary debate last year, Harris confronted Biden over his past opposition to school bussing policies and his working relationship with segregationist senators. The attack wounded Biden, who had centered his campaign around the promise to restore the soul of the nation.

After her own presidential campaign fizzled and she dropped out of the race last year, Harris returned to the Senate, where she found her voice in the midst of nationwide protests over racial injustice. She joined protesters on the street and delivered a deeply personal speech on the Senate floor about being Black in America. She sponsored police reform legislation and championed a bill to make lynching a federal crime.

On Wednesday, Harris’s speech capped the third night of the Democrats’ national convention, which moved almost entirely online due to the coronavirus pandemic.

Barack Obama, who used his speech to warned that Trump poses a threat to American democracy, and urged voters to turn out, was originally scheduled to speak last, but he asked to switch slots so he would precede Harris, in a symbolic passing of the torch, according to a Democratic official.

When Harris concluded, she turned to face a screen, which displayed Hollywood-squares style boxes with women from around the country applauding.

Harris clasped her hand to her heart and waved back, though the videos were pre-recorded. Joe Biden appeared on stage. Keeping with physical distance guidelines, they stood apart, waving to viewers at home from a silent exhibit hall in Delaware.

But once backstage, they burst into cheers.

Thu Aug 20 , 2020
You know my saying: The business of sports always wins. This week, however, my adage was proven wrong, as the Big Ten and Pac-12 conferences pulled the plug on fall college football, setting fire to a collective billions of dollars worth of sorely needed revenue. For these two power players […] 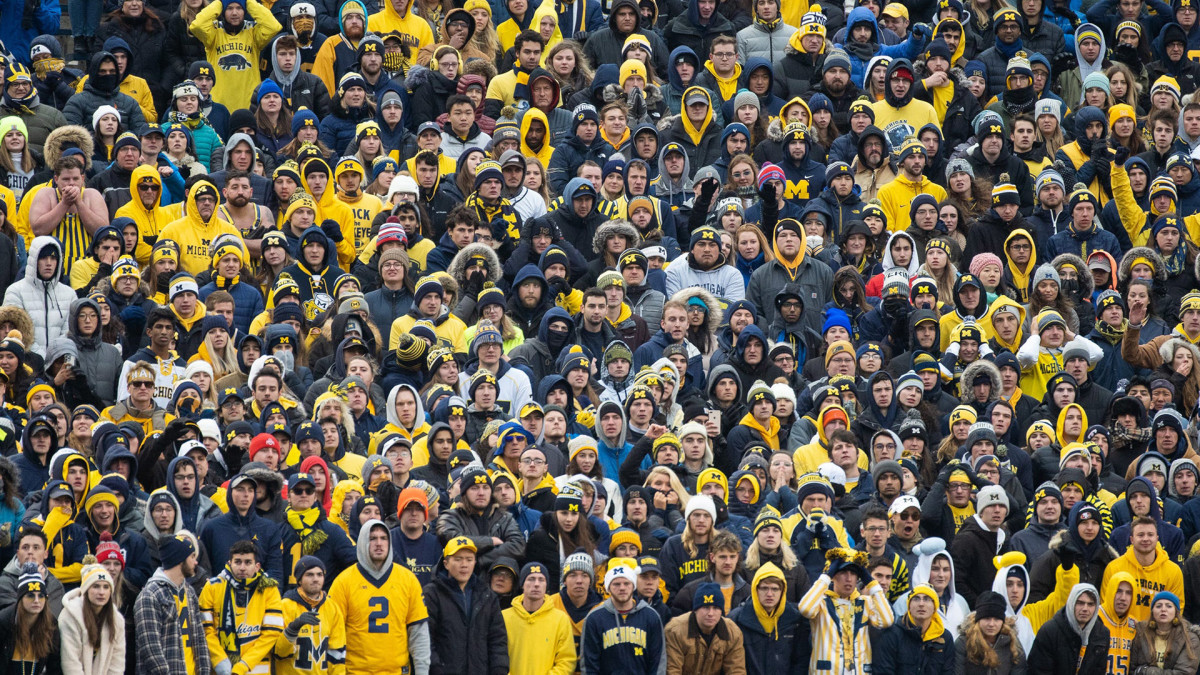