Kanye West had a visitor to his Wyoming ranch amid his headline-making tweets about his family — but it wasn’t wife Kim Kardashian. The rapper and 2020 presidential candidate shared a video on Tuesday with “true friend,” Dave Chapelle. West thanked the comedian on Twitter for “hopping on a jet to come see me doing well.”

In the clip, West appeared upbeat with a group of friends. At one point, he asked Chapelle to tell a joke: “Alright Dave, can you please make us smile? The world needs some — we need some joy, we need a smile.”

“The brotherhood is real,” Chapelle replied. “Love is real.”

West asked Chapelle again to tell an uplifting joke, to which the comedian quipped, “Now you know I don’t write them.” That made the Yeezy designer laugh and he and Chapelle exchanged hugs.

“I love you,” West told the comedian. “Thanks for coming out and checking on me.”

Chapelle’s visit comes after West publicly claimed his wife and mother-in-law, Kris Jenner, are trying to “lock me up.” In a series of now-deleted tweets on Monday night, the “Runaway” rapper took aim at his famous family, his wife’s career choices and once again publicly talked about “saving” daughter North West’s life. While West claimed to be “doing well” on Tuesday, sources close to the Kardashians fear the opposite is true.

“Everyone is extremely worried about him and his mental state,” one family friend shared with Yahoo Entertainment. “Kim has been trying to help him, but he doesn’t think he needs help. Especially not any kind of medical intervention.”

A second insider tells Yahoo that Kardashian is both “worried and upset” — the latter due to West bringing up North, 7, at a troubling campaign rally on Sunday where he alleged Kardashian considered getting an abortion.

“She was truly shocked,” said the source, but noted that “Kim just wants to get him help right now.”

People reports Kardashian has been trying to get West help for weeks.

West, who was hospitalized and placed under an involuntary psychiatric hold in 2016, was diagnosed with bipolar disorder. He publicly shared the news on his album Ye in 2018. But he later recanted, claiming he was misdiagnosed and had sleep deprivation. Kardashian told Vogue last year that after getting conflicting assessments from doctors, her husband reaccepted his diagnosis.

“I think we’re in a pretty good place with it now,” Kardashian shared in the May 2019 issue. “It is an emotional process, for sure. Right now everything is really calm. But we can definitely feel episodes coming, and we know how to handle them.”

The KKW Beauty mogul explained that West won’t take medication as he believes it hinders his creativity.

“For him, being on medication is not really an option, because it just changes who he is. Traveling a lot does set it off, so he doesn’t travel as much as he used to,” Kardashian shared. She also defended herself from critics.

“But honestly, I never want to speak for him, because I am not in his mind. But I think some of the hurtful things that I read online . . . . What is she doing? She’s not stopping him. . . . Like it’s my fault if he does or says something that they don’t agree with?” Kardashian continued. “That’s my husband. I share every opinion that I have and let him know when I think something’s wrong. Or if it comes to him being in the middle of a bipolar episode, I’ll do everything to be supportive and help to calm the situation.”

Kardashian has not issued any kind of public statement about West’s campaign rally or Monday’s tweets.

All dressed up and nowhere to go

Wed Jul 22 , 2020
Tita Ghanjanasak dressed as Harley Quinn in “Batman: The Dark Prince Charming” at the San Diego State University Transit Station. Ghanjanasak has been going to Comic-Con for four years and her favorite thing to see is the “Game of Thrones” cosplay. (K.C. Alfred / The San Diego Union-Tribune) With this […] 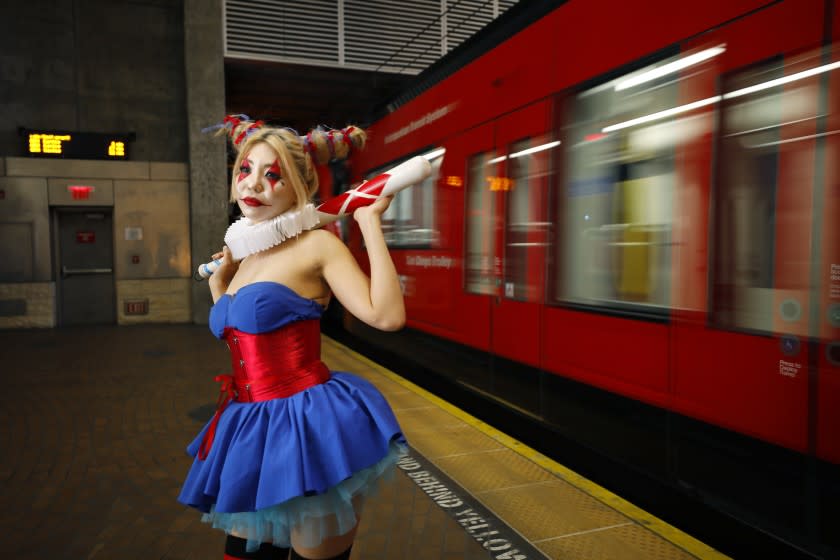