The Los Angeles Unified School District announced Sunday that it is launching an ambitious coronavirus testing and contact tracing program for all students, staff and their families — aiming to create a path to safely reopening campuses in the nation’s second-largest school district.

If the plan unfolds as described, it could be one of the most detailed to date for an American school district, involving nearly 500,000 students and 75,000 staff members. It appears to be the most sizable, at least until the larger New York City school system clarifies how it will manage testing and contact tracing.

The L.A. testing program is not an immediate prelude to reopening campuses. No date has yet been set, and plans for offering distance learning will proceed as the school year formally begins this week.

But what the testing and contact tracing program will offer is a scientifically based confidence builder leading up to the day campuses are able to reopen, providing a road map for safely managing renewed school operations and data to assemble a valuable base of knowledge.

“Extraordinary circumstances call for extraordinary actions, and while this testing and contact tracing effort is unprecedented, it is necessary and appropriate,” said L.A. schools Supt. Austin Beutner in remarks prepared for broadcast on Monday morning. “This program will provide public health benefit to all in the school community as well as the greater Los Angeles area. It will also provide significant education benefits for students as it will get them back to school sooner and safer and keep them there.”

The spread of COVID-19 in the Los Angeles area still far exceeds state guidelines governing the possible return of students to campuses.

Beutner reiterated that it’s not yet safe to return to campuses even as this plan is launched.

“The level of new cases in Los Angeles are still two and a half times the state guidelines, and while the portion of those testing positive is below state thresholds, it’s still considerably higher than the World Health Organization standards and those in place for New York,” Beutner said.

The superintendent referenced the New York school system because that district is planning to open campuses in a modified fashion when its school year starts in September.

Beutner also outlined the plan for testing and contact tracing in an opinion article in The Times published Sunday.

The district hopes to be able to test all students and staff as part of a partnership that includes UCLA, Stanford and Johns Hopkins University, Microsoft, Anthem Blue Cross and HealthNet, among others — with a price tag of roughly $300 per student over a year, close to $150 million.

The superintendent did not immediately identify the source of the funding, but the district has received hundreds of millions of state and federal dollars for its coronavirus response efforts. District officials also have said they could use additional funding.

The testing logistics are currently being fine-tuned and tests will first be administered to teachers and staff who are choosing to work from schools as well as any of their children enrolled in day care provided by the district, Beutner wrote in the opinion piece.

“Tests will then be provided for all staff and students over a period of weeks to establish a baseline,” he wrote. “On an ongoing basis, sample testing based on epidemiological models will be done for each cohort of staff and students.”

This month, the Los Angeles Board of Education unanimously approved a plan that will restore structure to the academic schedule while also allowing for an online school day that is shorter than the traditional one. Members of the teachers union also have approved the agreement.

The distance learning schedule leaves some L.A. Unified parents and advocates wanting more teaching hours. There also are parents who want fewer mandatory screen-time hours for their young children — a reflection of the complexities of distance learning and the widespread parent angst over the start of the school year at home and online.

Beutner has long called for widespread testing of students and staff, saying such protocols were key to safely reopening schools.

Public health experts have said that such a plan seemed impractical.

Beutner pointed to the success seen by South Korea, Denmark, Germany and Vietnam in fighting the virus, noting that those countries’ contact tracing operations could be applied to L.A. County schools.

The federal Centers for Disease Control and Prevention explicitly “does not recommend” comprehensive school-based testing, citing a lack of evidence that it would reduce transmission, plus concerns about resources, parental consent and student privacy. It is not yet clear how often LAUSD students will be tested.

It was not clear Sunday when the first testing would begin. It’s also not clear whether certain provisions of the plan would involve negotiations with employee unions.

School nurses are likely to play a central role in the plan. They are represented by United Teachers Los Angeles. Union leaders said they are preparing to negotiate over issues related to a return to campus.

So, far, “we only negotiated the impact and effects of distance learning,” said Arlene Inouye, the union’s elected secretary. “Our next negotiations will be about the physical return to schools.”

She pointed out that members of UTLA are not required to work from campus, although members of some other unions must do so.

Researchers at UCLA and Johns Hopkins University, who are providing services pro bono, will use the testing data to analyze the effects of reopening campuses, the district said. Researchers hope the program can be a national model.

During the first phase of the program, researchers will determine a schedule for the frequency of testing for students and staff, the district said.

“Determining an ideal testing strategy involves the application of epidemiologic principles and modeling informed by all available information,” Dr. Kristan Staudenmayer, an associate professor at Stanford who is spearheading the university’s contribution, said in a prepared statement.

Staudenmayer, in an interview with The Times on Sunday night, said the plan pursues “a very noble cause: continuing to give education to the children of L.A. Unified School District.”

Other key players include Microsoft, which will provide an app that families and employees can use to report symptoms — and which will be used to gather data districtwide that will guide the district’s ongoing response. The application also is intended to help people register for testing and obtain needed information.

Mon Aug 17 , 2020
While most of her peers are preparing for university or enjoying summer vacation, 17-year-old Howey Ou is braving intimidation and criticism in China to save the world from climate catastrophe. Young environmental activists around the world have skipped school to attend marches in protest at global inaction over climate change. […] 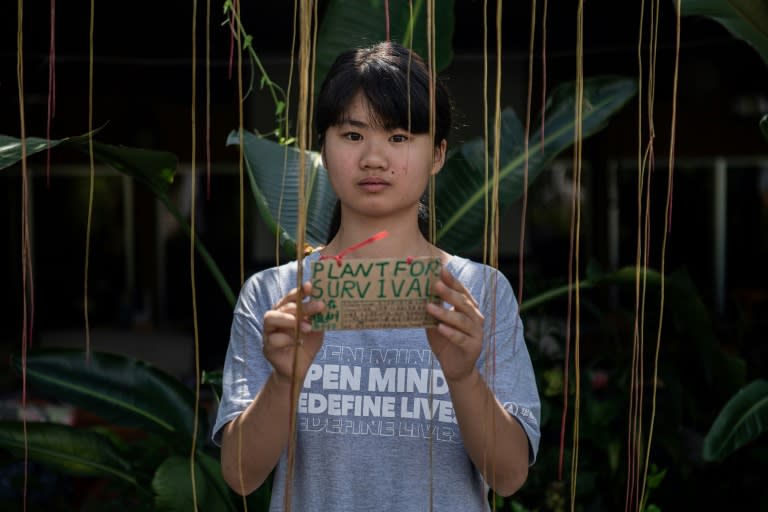