With the fiery flash of a rocket launch, NASA’s Perseverance rover headed out today for what’s expected to be a decade-long campaign to store up and bring back Martian samples that may hold evidence of alien life.

Due to the COVID-19 pandemic, access to the area surrounding the launch pad was restricted, but hundreds of thousands of people watched the liftoff via streaming video. And as if the pandemic wasn’t enough of a challenge, in the minutes before launch, a magnitude-4.2 earthquake rattled through NASA’s Jet Propulsion Laboratory in Pasadena, Calif., where the rover mission is managed.

Mission managers said the complications had no effect on the countdown.

An hour after launch, Perseverance’s spacecraft separated from the Atlas 5’s Centaur upper stage and flew outward to the Red Planet.

“I’m looking forward to, ideally, a very quiet and boring cruise to Mars, as we prepare for the never-boring and always stressful entry, descent and landing on the 18th of February,” said Adam Steltzner, the mission’s chief engineer at JPL.

Like its older cousin, NASA’s Curiosity rover, Perseverance will land with the aid of parachutes and a retrorocket-equipped descent stage. A “Sky Crane” will lower the 1-ton rover to the surface of Jezero Crater, and then the descent stage will blast itself away from the landing site.

The six-wheeled, nuclear-powered robot is designed for a primary mission lasting at least one Martian year, which is the equivalent of nearly two Earth years. But if Perseverance follows Curiosity’s example, it could be on the job for far longer.

Perseverance bears a strong resemblance to Curiosity, in that they’re built on the same basic chassis with a similar-looking camera mast and robotic arm. NASA and its collaborators have added some new twists, however.

A mini-helicopter called Ingenuity is tucked under Perseverance’s belly and will be deployed for unprecedented test flights after the landing. Another experiment called MOXIE will test a technique for turning the carbon dioxide in Mars’ thin atmosphere to oxygen. That trick will come in handy if and when NASA sends astronauts on extended trips to Mars as is planned in the 2030s.

The biggest difference between Curiosity and Perseverance is that the new rover’s scientific instruments are fine-tuned to look for signs of life on the microscopic scale.

A laser-equipped camera system called SuperCam can detect organic compounds in rocks and soils from a distance of more than 20 feet. Two close-up imaging systems, SHERLOC and PIXL, can theoretically make out the structural and chemical signs of fossilized microbes. And a radar imager called RIMFAX can map subsurface structure at a resolution of inches, to depths as deep as 30 feet.

The target landing site in Jezero Crater is thought to have been a river delta in ancient times, and it was chosen in hopes that the minerals in Martian rock would preserve fossils — or at least the chemical evidence of biological processes.

It’s unlikely that Perseverance will find indisputable evidence of life on Mars. Debates about Martian life detection tend to end inconclusively, whether we’re talking about the Viking lander missions of the 1970s or suggestions of “nanofossils” in Martian meteorites that fell to Earth. But this mission has a long-term strategy for settling such debates.

Perseverance is designed to drill out and save dozens of promising core samples for later pickup. The current plan, which is still under development by NASA and the European Space Agency, calls for sending out a NASA lander and a European-built rover in 2026. That rover would fetch the samples and put them into a capsule, which would in turn be loaded onto a mini-rocket and launched into Martian orbit.

Yet another spacecraft would take a trip to Martian orbit, capture the capsule and bring the samples back to Earth for study in 2031. That would mark the first opportunity to examine fresh samples from Mars with the best instruments that scientists have at their disposal — and the best opportunity to answer the age-old question about life on Mars..

“I do believe that the ultimate proof and the ultimate analyses that are really critical to that question, at the level of standard that we need to answer this, will come from laboratory analysis on Earth,” said Thomas Zurbuchen, associate administrator for NASA’s Science Mission Directorate. “So I believe this will be a process that will extend over 10 years or so, where evidence is mounting from remote sensing and in-situ measurements up there, but then really culminating in bringing these samples back.”

More morsels about the Mars mission:

Thu Jul 30 , 2020
An online self-help programme that helps people sleep better is more effective than face-to-face psychological therapy, a study involving over 7,000 NHS patients has found. Sleepio, a six-week digital treatment for insomnia, helped 56% of users beat the condition, whereas the success rate in NHS Improving access to psychological therapy […] 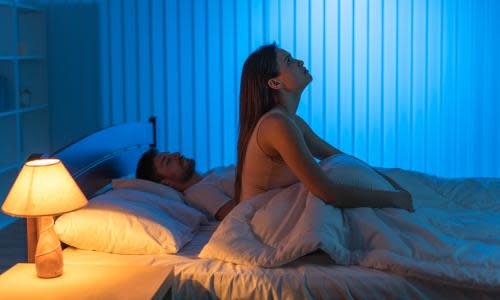