NEW YORK (AP) — The head of the organization which presents the National Book Awards is joining the Knopf Doubleday Publishing Group. Lisa Lucas, executive director of the National Book Foundation since 2016, has been named senior vice president of the Knopf imprints Pantheon and Schocken Books.

“I love books, I love talking about them, reading about them and spreading the word about them,” Lucas said in a recent telephone interview. “And the idea that you might walk into a bookstore and see a book you published seemed this extraordinary, magical, beautiful thing.”

The 40-year-old Lucas has been widely praised for her passionate stewardship of the foundation, from organizing the annual November dinner ceremony in Manhattan for the National Book Awards to overseeing the foundation’s wide range of literary and educational programs. She will join imprints that have a long history of publishing critical and commercial successes, including works by Simone de Beauvoir, Studs Terkel and Art Spielgelman. Last year, Pantheon published Laila Lalami’s novel “The Other Americans,” a National Book Award finalist for fiction, and the English language edition of Yoko Ozawa’s novel “The Memory Police,” a finalist for best translation.

“I’ve loved watching Lisa deploy her formidable skills and boundless energy on behalf of the National Book Foundation; her work as an advocate for writers and readers has been truly inspiring,” Knopf executive president and publisher Reagan Arthur said in a statement Wednesday.

Lucas , the first Black and the first woman to lead the book foundation since its launch in 1989, told The Associated Press that she loved her current job and had not been seeking new work. But her decision to leave originated with a tweet earlier this summer in which she inquired, jokingly, whether anyone was needed to run an “equitable publishing house.” (At the time, numerous Black authors were disclosing the advances they had received for books, often less than for comparable books by white authors).

Arthur, who already had been interested in hiring Lucas, got in touch.

“She didn’t tell me what she wanted at first,” Lucas says. “We just had this really organic conversation about careers and the book world and what I was I good at and what I was interested in. I didn’t realize at first that we were having this very serious conversation and when she told me about the job it was something I wasn’t able to ignore.”

A native of New York City who grew up in Teaneck and Montclair, New Jersey, Lucas has held a variety of positions in the book world, whether publishing Guernica magazine or serving on the literary council of the Brooklyn Book Festival. She will remain with the book foundation through the end of the year, and will again oversee the awards ceremony, to be held online because of the coronavirus.

“We are deeply grateful for Lisa’s years of leadership at the National Book Foundation,” David Steinberger, chair of the foundation’s board of directors, said in a statement. “We congratulate her on this exciting new chapter in her career and look forward to Lisa continuing to make a difference in the literary world and the world at large.”

Back to school in Orange County without masks and social distancing? Many call that reckless

Wed Jul 15 , 2020
People gather in Laguna Beach in May to protest Gov. Gavin Newson’s order temporarily closing Orange County beaches. (Luis Sinco / Los Angeles Times ) Recommendations approved by the Orange County Board of Education to welcome students back to campuses without increased social distancing in classrooms or the mandatory use […] 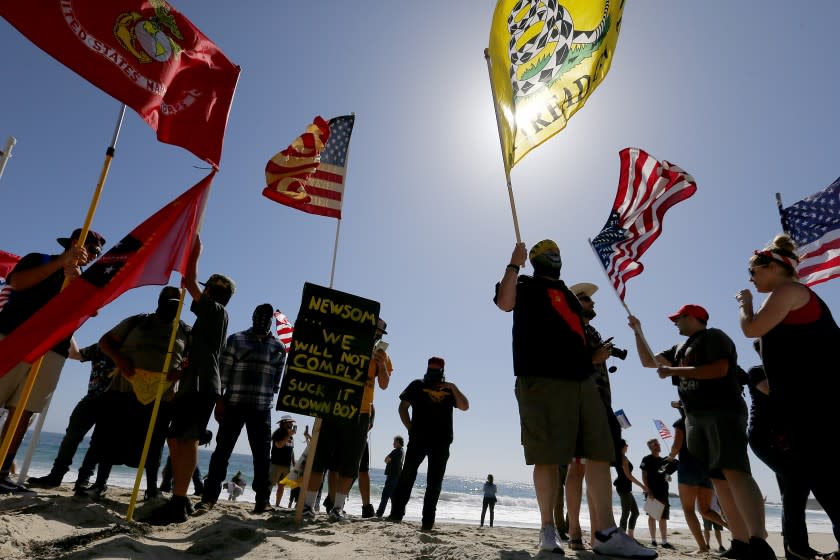