Under the rules announced Wednesday, anyone older than age 5 will be required to wear a face covering in all indoor public areas of businesses and buildings, including churches, offices and restaurants. Hogan’s order also expands the requirement to outdoor spaces when it is not possible to maintain social distancing. The order takes effect at 5 p.m. Friday.

The travel advisory applies to states with positive test rates of or higher than 10%. Hogan says if people must visit those states, they should immediately be tested upon returning to Maryland and quarantine themselves until learning the results.

— As the world races to find a vaccine and a treatment for COVID-19, there is seemingly no antidote in sight to the burgeoning outbreak of coronavirus conspiracy theories, hoaxes, anti-mask myths and sham cures.

— Ecuador’s capital of Quito has experienced an alarming surge in coronavirus cases since the government reopened the economy last month. There have been 82,300 confirmed infections of the coronavirus in Ecuador and about 5,600 deaths

— Mary Daniel took a part-time job washing dishes at the nursing home a few weeks ago just so she could visit her husband. Gov. Ron DeSantis is considering allowing visits if people can take a rapid-response virus test.

The suit filed Wednesday says Edwards cannot show a “real or substantial relation” between the closure of bars to inside drinking and the public health crisis. They say only a small number of known COVID-19 cases have been traced to bars.

The Louisiana Department of Health has traced 464 confirmed coronavirus infections to 41 bars. It says that is among the largest number of cases tracked to a specific type of business.

Edwards and his health advisers say bars are specifically problematic because people tend to huddle closely without masks while drinking and are less careful in their virus precautions the more alcohol they consume.

MIAMI — Florida’s largest school district says it will not reopen schools for in-person learning for at least six weeks and instead implement fully remote instruction because of the surge of coronavirus cases and hospitalizations.

Miami-Dade County Public Schools said Wednesday the school year will begin virtually Aug. 31, a week after it was originally scheduled to start.

Superintendent Albert Carvalho says a decision on whether to offer in-person learning will be made in late September, based on data on coronavirus infections and COVID-19 hospitalizations.

Florida Gov. Ron DeSantis is urging districts to offer both online and in-person options, arguing going to school is crucial for many students, especially disadvantaged children.

NEW YORK — The confirmed death toll from the coronavirus in the U.S. has hit 150,000, by the far the highest toll in the world. That’s according to the tally kept by Johns Hopkins University.

The bleak milestone comes amid signs that the nation’s outbreak is beginning to stabilize in the Sun Belt but heating up in the Midwest, fueled largely by young adults who are hitting bars, restaurants and gyms again.

The surge has been accompanied by a burgeoning outbreak of misinformation and conspiracy theories about supposed cures and the effectiveness of masks.

AUSTIN, Texas — The coronavirus death toll in Texas has risen to 6,190, with 313 newly reported fatalities Wednesday.

Texas officials also reported 9,595 COVID-19 patients in the hospital Wednesday and 9,042 newly confirmed cases, the most in nearly a week.

The state’s death toll has escalated rapidly amid a surge of infections and hospitalizations in June and July.

ALTURAS, Calif. — A remote California county bordering Oregon and Nevada that was the first to defy state shutdown orders to prevent the spread of the coronavirus has recorded its first COVID-19 cases.

The county’s Public Health Department said Tuesday it is identifying people who may have had close contact with the people. The department has also asked anyone who patronized a local bar to call officials.

The county of about 9,000 residents on May 1 defied Gov. Gavin Newsom’s shutdown orders by reopening nonessential businesses and restaurants for dine-in service.

APEX, N.C. — Vice President Mike Pence vowed Wednesday that schools around the country will have the resources they need to reopen for in-person learning as he visited a classroom of masked fourth graders at a North Carolina private school.

The visit comes as President Donald Trump and U.S. Education Secretary Betsy DeVos have threatened to withhold federal funding from K-12 schools that don’t allow all of their students to return to physical classrooms. Critics including Democratic presidential candidate Joe Biden have slammed Trump over the threats and argue that his administration hasn’t provided enough resources or guidance to schools.

Accompanied by DeVos, Pence visited a Raleigh-area campus of Thales Academy as part of a push to encourage more schools to reopen with in-person instruction.

“We’re all gonna make sure schools across America have the support to open up and stay open,” Pence said.

TOPSFIELD, Mass. — The coronavirus pandemic has forced the cancellation of a more than 200-year-old Massachusetts agricultural fair for just the third time in its history, organizers said Wednesday.

The Essex Agricultural Society, the organization that runs the Topsfield Fair that was scheduled for Oct. 2-12 this year, said the decision was made for the safety of fairgoers, staff, volunteers, vendors, exhibitors and sponsors.

“We understand the impact of this decision for small businesses, family farms, competitors, and exhibitors and the disappointment of hundreds of thousands of people who look forward to the Topsfield Fair each year,” General Manager James O’Brien said in a statement on the fair’s website.

PROVIDENCE, R.I. — Gov. Gina Raimondo announced Wednesday that she’s cutting the maximum number of people allowed at backyard barbecues, house parties and other social gatherings in the state from 25 to 15 people.

The Democrat also said the state won’t move into the next phase of its reopening plan. Instead, she said phase 3, which was slated to end Wednesday, will be extended for at least another 30 days.

Raimondo said she made the decision because the state’s infection rate is rising as a result of large social gatherings, particularly among young adults in their 20s and 30s.

“We’re partying too much,” Raimondo said. “You need to knock it off. People are sick and people are dying. Your right to have a party should not infringe on their right to live.”

The new numbers raised the average number of deaths reported daily to 142. That’s second only to Texas overall, and to Arizona in per capita deaths.

MONTGOMERY, Ala. — Alabama Gov. Kay Ivey extended a state order requiring masks in public for another month to help slow the spread of the coronavirus as schools reopen.

The mask order will run through Aug. 31. Hospital officials had pushed for an extension, saying the state’s intensive care units are nearly full because of the new coronavirus.

“Y’all, we just must remain vigilant if we are going to get our kids back in school and keep our economy open. Wearing a mask can’t hurt, but it sure can help,” Ivey said.

The Republican governor, in a nod to the opposition some conservatives have to the mask orders, say her job is “to do the right thing, not necessarily the most popular thing.”

The state health department reports an average of 1,900 new confirmed infections daily over the past week.

GUATEMALA CITY — Guatemalan hospital officials say they’ve had to bury dozens of COVID-19 victims who have never been identified.

One hospital is creating an archive in hopes that once the pandemic passes, relatives will come looking for them.

Workers at one of the country’s largest public hospitals have begun photographing patients who arrive alone and too ill to give their personal details. Those who die unidentified are placed in body bags with transparent windows over the faces in case relatives arrive.

Officials says protocols to rapidly burying the dead during a pandemic only make the situation more difficult.

The government has reported more than 47,000 confirmed infections and more 1,800 deaths nationwide.

PARIS — France is reporting another increase in coronavirus cases, adding 1,392 on Wednesday. Health authorities said the closely watched “R” indicator of infections has nudged past 1.3, meaning infected people are, on average, contaminating more than 1.3 others.

That gauge has been ticking upward since July 1, when the first wave of vacationers headed for beaches and holiday homes.

There was also an increase in new clusters, an additional 21 uncovered in the last day.

TEL AVIV, Israel — Israel’s parliament has passed a plan to give economic aid to every Israeli citizen to help the flagging economy.

Prime Minister Benjamin Netanyahu announced the plan this month amid a wave of protests of his rule and handling of the coronavirus crisis. He says the cash is meant to stimulate the economy.

Critics say the proposal passed Wednesday is a populist attempt to quiet the protests. The proposal has been panned by many of Israel’s leading economists for not being the best solution.

The economic stimulus proposal will give single individuals one-time payments of about $200. Families will receive at least $600, depending on the number of children.

Israel has seen a surge in daily infections after appearing to contain the virus this spring.

South Carolina reported 1,573 new coronavirus cases Tuesday and confirmed 52 more deaths. Nearly 84,000 people have tested positive for the virus during the pandemic and the death toll has topped 1,500, according to the South Carolina Department of Health and Environmental Control.

It says 60 more likely coronavirus deaths are under investigation.

Many local school districts are working on reopening plans that must be approved by the state. Schools must reopen by the day after Labor Day. Gov. Henry McMaster has asked for districts to offer class five days a week. State Education Superintendent Molly Spearman can approve or reject local plans.

The Health Ministry says its the highest since early May and up from 905 new cases reported Tuesday. The northeastern regions of Aragón (424 new cases) and Catalonia (211), recorded the highest increases followed by the Madrid region (199).

Those regions have in recent days tightened restrictions on socializing, including limiting how many people can gather and nightlife venues hours. Masks are mandatory in public areas.

The recent increase has prompted countries such as Britain, France and Germany to discourage tourists from traveling to Spain.

The move came as Italy counted 289 confirmed new positives, bringing the pandemic total to 246,776. Another six people died, bringing the death total to 35,129.

Premier Giuseppe Conte told lawmakers that if ideology was put aside, the extension “is an inevitable choice’’ to manage the virus and future spikes.

The head of Italy’s National Health Institute, Silvio Brusafero says Italy has been reporting 200-300 new infections each day in recent weeks. The peak of 6,500 new daily cases was hit on March 31.

NEW DELHI, India — India will lift on Aug. 1 a night-time curfew that has been in force since late March to curb the spread of the coronavirus.

The 48,513 new positive cases reported Wednesday brings India’s nationwide tally beyond 1.5 million, trailing the United States and Brazil. There have been 34,193 reported deaths.

The Indian government says the country’s death rate is 2.23% — the lowest since April 1.

BANJUL, Gambia — Gambia’s vice president has tested positive for the coronavirus and the president is going into quarantine for two weeks as a precaution.

The small West African country has reported only 326 confirmed cases and eight deaths.

Should Your Children's Schools Reopen Yet? The Facts & the Unknowns

Thu Jul 30 , 2020
If you’re looking for a straight yes-or-no on whether it’s safe to send your children back to school in August or September … sorry, we can’t give that to you right now. Actually, no one can. But what we can do, as this debate rages on in households, state capitals, […] 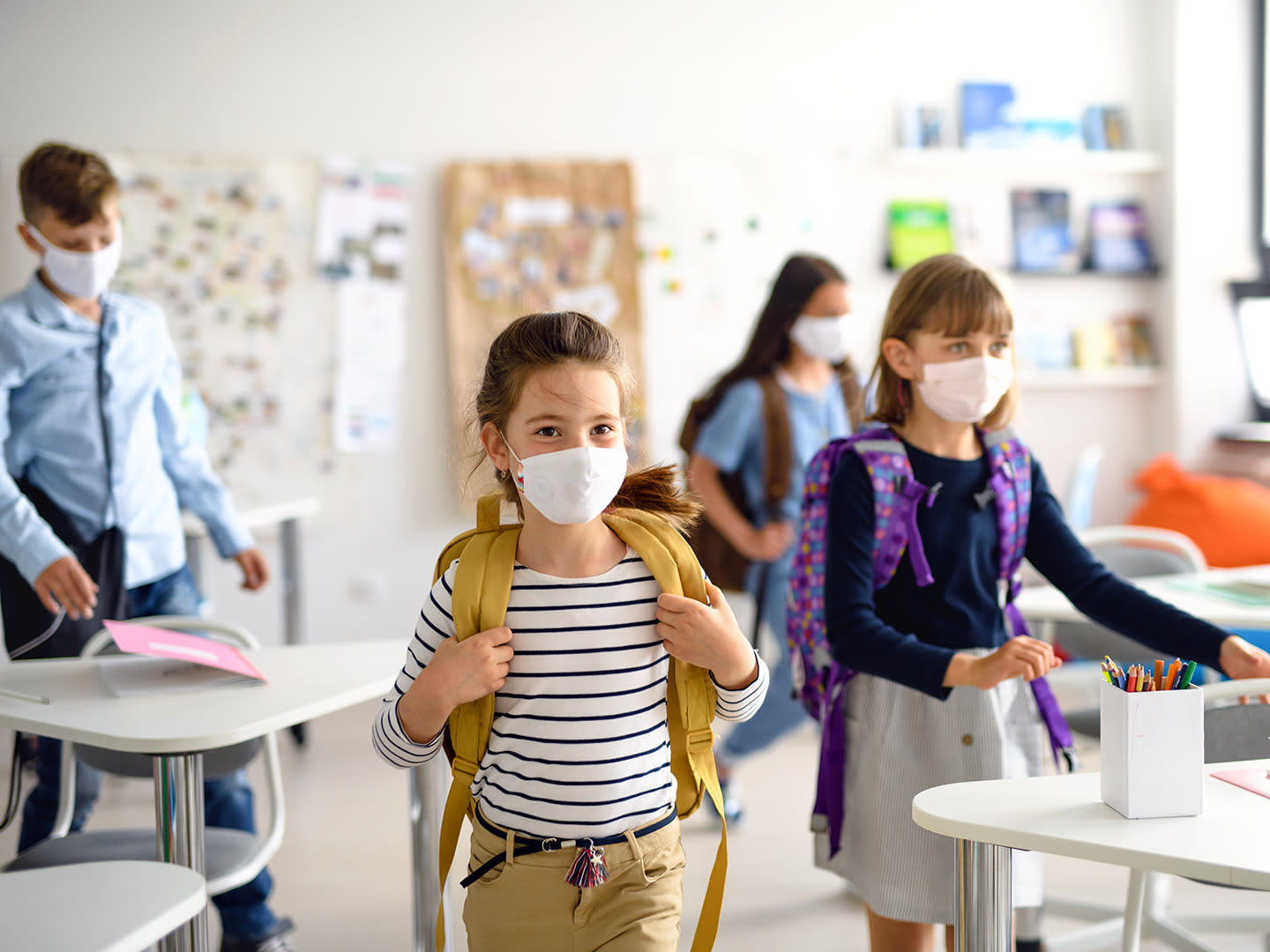