“For most of my adult life I’ve wanted to try and convey this experience which I’ve never really seen presented the way I experienced it,” says director Alex Winter of Showbiz Kids, his new documentary chronicling the grey areas of childhood stardom.

“Unless you’ve been in it, you just don’t know. You’re going to make assumptions and those are often going to be wrong,” says Winter of growing up in the spotlight. “I wanted to tell a more nuanced story than the one I was used to seeing.” By speaking to a variety of former child stars including Stand By Me’s Wil Wheaton, Jada Pinkett Smith and the late Disney star Cameron Boyce, Showbiz Kids paints an all-encompassing picture of the unexpected pressures, challenges and tricky transitions from child star to well-rounded adult that so often falls by the wayside whenever this controversial topic is discussed.

“What I like about making documentaries is they allow you to get away from the black and white and into a more subtle examination,” explains the director. “That’s been true of every doc I’ve made – and it’s especially true in this case.”

This ability to explore the dark corners of a topic so tangled with conflicted opinions is something that’s only recently been made possible. “There’s no doubt the Me Too movement opened up a pathway for discussing these issues in a way that was absolutely not possible before. It made a significant difference in the public discourse around these issues,” Winter tells Yahoo Movies.

“I could have made the film before but I don’t think it would’ve had as much impact because I don’t think people would’ve been as willing to listen to these stories. More importantly, the movement has allowed people who are vulnerable to abuse to come forward and communicate. They feel much safer now,” he adds. “That doesn’t mean these issues have gone away – it’s just the first step of being able to deal with them.”

One person with first hand experience in this domain is mental health activist and former child star Mara Wilson. With roles opposite Robin Williams in Mrs Doubtfire, Richard Attenborough in Miracle on 34th Street and Danny DeVito in Matilda, Wilson became a household name all before she was six.

Today however, she’s keen to set the record straight about her Hollywood journey. “I definitely think there’s a narrative that’s imposed upon us. There’s this idea that we crash and burn or we’re to be pitied when we’re not cute anymore,” suggests Wilson.

“Trying to stay away from that narrative is something I’ve personally struggled with. It leads to this other narrative – the idea you either grow up well as a child actor or you don’t,” she adds. “I think about it a lot because nobody really turns out anything. People are constantly changing throughout their life.”

Alongside testimonials from former child stars, Winter introduces us to a new generation of emerging talent and the eye-watering odds that are stacked against them. However according to Wilson, fame was never the aim of the game when she started her career. Instead, it was a desire to keep those around her happy that resulted in her unexpected success:

“I think you can’t be a child actor without the people pleasing streak coming out at some point,” she says candidly. “I also just didn’t understand the magnitude of things. It felt easy come, easy go to me. It was just something fun that I liked doing instead of an actual career – which is what it was. It was a life-altering commitment that I made when I was five,” admits Wilson.

“I don’t think my parents would’ve done it had they known I was going to be even remotely popular. For them it was just a fun experience. They didn’t think I’d be in newspapers or magazines.”

Of course she was – and this sudden fame was something Wilson struggled to deal with, especially when her professional career peaked just as her personal life imploded. “I loved working on Matilda. It was a part I loved with so many great people but my mother was ill with cancer. As soon as that film wrapped, I was having terrible panic attacks and obsessively washing my hands,” she says, detailing the early stages of her obsessive compulsive disorder.

“There were times where I felt like I couldn’t go outside because I didn’t know who was going to recognise me. I had imposter syndrome,” explains Wilson. “I felt like I always had to be perfect and live up to the character of Matilda. It was like being recognised for somebody else’s achievements and a tremendous amount of pressure.”

To chronicle the root of these issues, Winter speaks to one of Hollywood’s first child stars, the late Diana Serra Cary. As silent cinema hit Baby Peggy, Cary’s experience had an eerie resemblance to one of Showbiz Kids’ youngest interviewees, Cameron Boyce.

“Speaking to Diana was the most revelatory aspect of making the film for me,” reveals Winter. “I didn’t expect to talk to a woman who was over 100 years old and came up in an industry that was unrecognisable to the industry I came up in and discover we’d experienced the exact same thing. There were instances where Cameron finished Diana’s sentences because their experiences were so similar,” he adds, echoing the duo’s unlikely connection. “Cameron was an example of how you could come through this pretty well in the modern age – even when social media is applying so much scrutiny to these kids.”

While Wilson is glad that Twitter wasn’t around during her transition from child actor to young adult, her own experience had its own challenges, including odd film-school cliques. “There were a lot of kids at my school who would make fun of me because the people who did modelling were much cooler than me, who was in kids movies,” she laughs.

“Disney kids definitely stuck together and aspiring actors were mad at kids who’d actually got roles. There was a lot of jealousy and competition – like, ‘you shouldn’t be the one who’s famous – I’m a better actor’” Cut to 2020, and this excess of pressure is mirrored in today’s social media world: “Everyone’s become a cultural critic,” says Winter. “The old cliche is don’t read the comments section – but if you’re a kid in entertainment, the whole world can feel like the comments section or the nasty table at the cafeteria.”

Despite the child star industry showing no signs of slowing, both Winter and Wilson are hopeful for the future of young Hollywood – especially thanks to a rise in accountability. “The fact that there are people on set only to protect the wellbeing of kids is huge,” enthuses Winter.

“Hollywood doesn’t have a child abuse problem – the world has a child abuse problem and things like the Me Too movements are making that more evident.” Wilson agrees that it’s these wider issues that need addressing: “I had generally good experiences in Hollywood. That changed a little bit as I got older but the worst things that happened came either through the media or by people who considered themselves fans but were making me uncomfortable. The public perception messes people up. Getting fan letters from creepy old men when you’re a child – that messes you up,” she says.

“What I really hope is when people see this film they don’t try to impose their own narrative on it and actually try to listen to us because there’s a lot that we have to say that just hasn’t been heard.”

Showbiz Kids is streaming on NOW TV with a Sky Cinema Pass.

Here's how to copy this season's biggest hair trend

Wed Jul 22 , 2020
Red is set to be the colour of the summer thanks to Kim Kardashian West’s new Nineties-inspired do: Kim Kardashian West Instagram Red hair is in. While your immediate thought may be of fire truck coloured tresses, newer, more modern shades are emerging such as copper, cherry, rose, and berry. […] 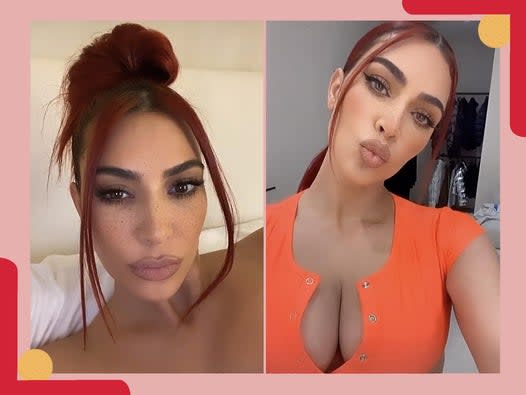