The Wikipedia entry for Meghan Markle was altered days before her relationship with Prince Harry was made public to remove a television quiz-show appearance and alter her occupation from model to humanitarian.

A reference to her work as a model on the US version of Deal or No Deal was scrubbed from Wikipedia late at night on October 9 2016, three weeks before it was disclosed she was dating the prince.

In a separate change made 10 minutes later on the same day, her occupation was edited so that instead of being listed as an “actress, fashion model and spokesmodel” she became overnight an “actress, activist, humanitarian”.

In the edit, timed at 10.48pm, her entry was drastically altered to include a complete new section under the heading ‘Humanitarian work’ that included a visit to Rwanda for a water charity, her work with “The United Nations Women” and a visit to Afghanistan in 2014.

Under her occupation, the editor also added to the entry that she was “Founder of The TIG”, which was her lifestyle blog at the time.

Wikipedia is meticulous at charting changes to entries and the ones on October 9 were made by an anonymous user giving only an IP computer address 69.75.177.197.

The Telegraph could find no evidence of the public relations company ever representing the Duchess.

The then actress’s blossoming romance with Prince Harry was finally made public at the end of October.

A controversial new biography – Finding Freedom – claims that Meghan and Harry were aware that their relationship was likely to become public after they had first met each other in the summer and that she would become subject to intense scrutiny.

It is possible that friends of the actress chose to make edits to the Wikipedia entry, aware that her life would suddenly become of huge public interest. Wikipedia, a free online encyclopaedia, is the fifth most popular website in the English-speaking world and one of the first places people will have turned when Meghan first came to public attention.

Prior to the changes on October 9, under the heading “Acting career”, the entry stated: “Markle made her debut late in the first season of Deal or No Deal on April 12, 2006. Aside from a single appearance holding case #12, Markle was the regular model carrying case #24. Markle quit the show in early 2007.”

It also says that “Markle also appeared as a ‘mob’ member and was interviewed on one episode of the game show 1 versus 100.”

The reference is absent after the changes were made and instead extra space is made for her ‘humanitarian work’.

Meghan and Harry subsequently married in 2018 to great fanfare, but the Duke and Duchess have since moved to California.

The duchess is currently suing the Mail on Sunday for breach of privacy after it published part of a letter she had written to her father.

The case resumes in court for a hearing on Wednesday.

Wed Jul 29 , 2020
Fox News host Tucker Carlson continued his contrarian stance on the coronavirus pandemic on Tuesday night, defending a viral video of fringe doctors peddling COVID-19 falsehoods and claiming the group was only attacked because they criticized the “sainted” Dr. Anthony Fauci. Hours after President Donald Trump doubled down on his […] 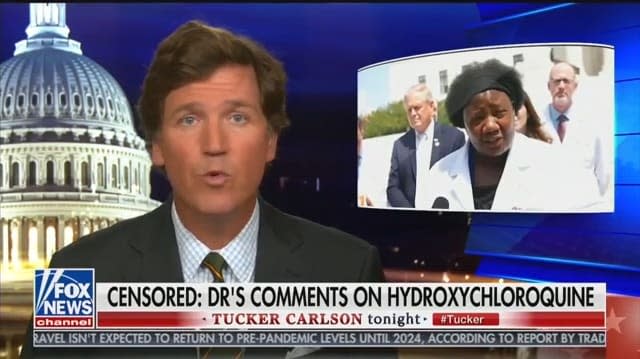