NASHVILLE, Tenn. (AP) — Mickey Guyton is turning a mirror on country music by speaking her truth and reclaiming both her career and identity.

Delivering a one-two punch of important songs this year leading up to her first new EP in five years, Guyton is not holding back her powerful voice any longer. Guyton has re-introduced herself after years of internal doubt and feeling unable to be herself as a Black woman in a genre dominated by white men.

The six-song EP called “Bridges,” coming out on Sept. 11, contains “What Are You Gonna Tell Her,” a pointed critique of the barriers that women face, and “Black Like Me,” revealing her own early experiences with racism. Other songs like “Heaven Down Here” and “Bridges” show her attempting to bridge the cultural and ideological divide.

Her musical career plans this year were thrown off course due to the coronavirus pandemic, but she kept marching forward anyway. Parts of the album were recorded or written from her home in Los Angeles, where she’s been isolating with her husband, with remote help from her producer Karen Kosowski in Nashville. Guyton set up a DIY vocal studio and started learning audio recording software.

“We worked out a flow where she can just sit back and sing and I can produce her over Zoom as if she was in the vocal booth next to me,” said Kosowski, who also co-wrote two of the songs on the EP with Guyton.

Guyton’s impressive vocals don’t need much adornment, but Guyton pushed herself on the title track, “Bridges,” a gospel influenced song about finding common ground instead of divisiveness.

“When she sang the vocal on ‘Bridges,’ her husband, Grant, ran into the room from the other room, going, ’What is happening in here? That’s sounds amazing!’” said Kosowski.

Although she stands on the shoulders of other Black female country artists like Linda Martell, The Pointer Sisters and Rissi Palmer, Guyton has had to chart her own path in country music. The Texas-born singer fell in love with country music from an early age and learned about Dolly Parton from her grandmother. But after being signed to Capitol Record Nashville in 2011, she’s had to constantly stand up to questions about her authenticity.

“That was such a frustrating thing for me to have to deal with, because if I were white with blonde hair and green or blue or brown eyes, it wouldn’t even be a question,” said Guyton.

Guyton was lauded in 2015 for her debut single, “Better Than You Left Me,” which country radio seemed eager to adopt at the onset but peaked only at No. 34. Like many women in country music, her songs lingered on the low end of the country radio charts even as bro country lookalikes zoomed to the top.

After a couple of years of struggle, Guyton wanted to walk away. But supporters like Cindy Mabe, president of Universal Music Group Nashville, wouldn’t let her.

“Her truth has come over time because she figured out who she was,” said Mabe. “I don’t know of a more fearless artist than Mickey Guyton.”

Mabe asked her to sing “What Are You Gonna Tell Her?” at the label’s annual showcase for country radio programmers in February. Her pointed questions about the inequalities that women face was not lost on the room full of radio gatekeepers whose stations keep women’s voices to a bare minimum.

“When I got up and they said my name to walk on the stage, I said, ‘Oh, curse word. This could be the end of my career,’” Guyton said with a laugh.

Instead, the entire audience gave her a standing ovation as Guyton fought back tears.

Guyton wrote “Black Like Me” before the deaths this year of George Floyd, Ahmaud Aubrey and Breonna Taylor that sparked worldwide protests against racism. When she released it on Black Out Tuesday, she braced for the impact.

“In the country music industry, we’re about peace, love and harmony, and we don’t want to ruffle any feathers. We want everybody to feel comfortable,” Guyton said. “I’ve been in a lot of rooms where everybody else is comfortable and I’m very uncomfortable.”

She recalled being at post-Grammy Awards label party and meeting a high-powered male executive from a streaming service. She was hoping for streaming support for “Black Like Me,” and instinctively tried to put her best foot forward.

“I perked up, batted my eyelashes, and did the thing to get my opportunity and I walked away completely disgusted with myself,” Guyton recalled. “And I was like, ‘What am I doing? Why do I need to perk up and bat my eyelashes to get a song called ‘Black Like Me’ played?’”

These days, Guyton doesn’t hold back when calling out racism and inequality when she sees it, whether she is pointing out the hateful messages she gets from online trolls or responding back to other country artists on Twitter. She said the shut-up-and-sing mentality is hurting the genre.

“I have to pick my battles,” said Guyton, who is fan of a well-placed Megan Thee Stallion gif to make her point. “But if I see damaging tweets that can damage people, I will say something.”

Guyton has already seen the effect that “Black Like Me” has had on social media, watching people all over the world sing along with and identify with the lyrics “If you think we live in the land of the free/You should try to be black like me.”

“Country music is three chords and the truth. This is my truth,” said Guyton.

Should I go to university this year?

Thu Aug 13 , 2020
Getty Images Today, A-level students around the country will have received their results, giving them an indication of where they might go to university. The results were expected to be mired in controversy following a last-minute decision by the government to allow students in England to use mock exam results […] 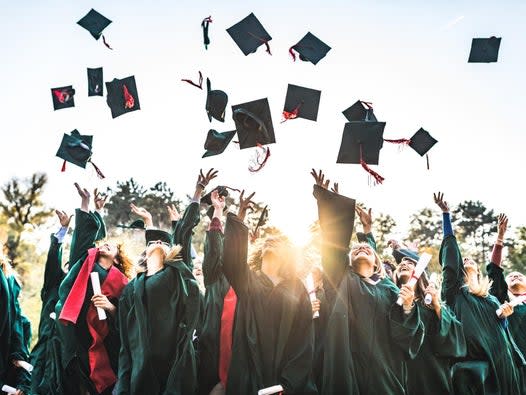