My elder daughter recently decided she would not return to her college campus for the fall semester, and I am equal parts relieved and deeply sad.

Relieved because I think it is the wisest choice and deeply sad because, while certainly not a tragedy in the larger landscape of a pandemic, it is a blow nonetheless and one that my husband and I could do nothing to prevent.

Compared with the horrendous loss of life, employment, homes and physical and mental well-being experienced by so many this year, surrendering a semester of on-campus college life seems of little consequence. But for those involved, the cancellation or radical curtailment of life-marking events and transitions — graduation ceremonies, weddings, christenings, birthday parties and even funerals — matters a lot, as millions now know.

For parents, it is a brutal reality check. There are, as it turns out, some possibilities that cannot be foreseen and planned for, some problems that no phone call, email, pep talk, hiring of outside resource or infusion of cash can alleviate.

Many things can be replaced or restored, but time is not one of them.

We can’t even, in good conscience, offer our children assurances that it will all get better soon. The rollback of California’s recent and brief reopening proves that.

Parenting, at least in the traditional “we understand the world at least a little better than you do” sense, is yet another victim of the coronavirus.

In March, when COVID-19 emptied all schools and universities, Fiona came home from her college, Temple University in Philadelphia. She was shaken and upset, just like millions of other students, and feared that life as she knew it was over. And we, like millions of other parents, consoled her with the belief that everything would be fine, that her exile was only temporary.

For a theater major, even finishing up a semester online was something of a challenge. Despite many requests, she refused to let us watch her take her sword fighting class (she swears there was no actual damage to her bedroom walls, though she has done a lot of furniture and picture rearranging since then).

I did manage to watch her through the window as she taped her Shakespeare final, a performance of Hamlet’s “No Fear” monologue. Her teacher had encouraged students to try something “different” and as the speech includes several descriptions of the sky — “this majestical roof fretted with golden fire” — Fiona decided to film it, on her phone, in our backyard.

Alas, Mr. Shakespeare made no reference to those non-majestical leaf blowers, barking dogs, delivery trucks or chatting neighbors that repeatedly ruined even her best takes. “I don’t think I can be an actor,” she said at one point, coming inside to throw herself face down on the sofa and sob. I assured her that even Derek Jacobi might have found it difficult to perform “Hamlet” for the first time to a smartphone in the backyard without ever having had the benefit of director, audience or stage.

Please let it be temporary, we all prayed, and with Pennsylvania virus rates decreasing and Temple’s announcement that it would open with a hybrid of online and on-campus classes, we thought, for a minute, that it would be.

By July, however, surging infection rates, similar to those in California, kept Philadelphia from entering its green phase. When she got her schedule everything, including her acting classes, was online. So not temporary. Or, if we’re still trying for optimism, an extended version of temporary.

For days, we agonized over whether she should go back anyway. Fiona could matriculate online from an apartment in Philly just as easily as from her California bedroom — and then at least she would not feel like she was back in high school, could at least see her college friends, have some trappings of college life.

But she was afraid that students would start testing positive, getting sick and the campus would close once again, sending her into another frenzy of packing and canceled flights.

More than that, she worried that the temptations of socializing, even with the masks and social distancing requirements, would be too great for even her “oh my God, Mom, you need to wash your hands” resolve.

As Laurence Steinberg, a Temple University professor, recently noted in a New York Times op-ed, the notion that college students are capable of maintaining socially distant practices seems more like a delusion than a hope.

Fiona loves Philadelphia, loves her campus, professors and friends, loves the freedom-with-training-wheels opportunity to claim a city in which her family has no ties, a city that is so different from Los Angeles. But she will not be returning for the fall semester.

And no matter how we try to spin it, giving up even six months of those four long-anticipated college years, well, it pretty much sucks.

She cried for days, and although she is coming to terms with what she believes is the best decision, she will no doubt cry, and rage, and feel anxious and depressed at times for many more. And the worst part is, there is nothing her father or I can do, because it is a perfectly understandable reaction. She is very aware of the “it could be worse” context — thus far, none of our family or friends have gotten very sick; thus far, we can afford to support an unexpectedly full nest; thus far, she is still able to get a college education, even if it is not in the way she had always imagined.

But it still sucks. She is 20, stuck at home, and her only real consolation may be that her 22-year-old brother, a lucky 2020 college grad, and her 13-year-old sister, who will probably not be going back to middle school, are stuck at home with her. I believe they are planning on making a movie, so Netflix, stay alert.

And I’m stuck right there with them, keenly aware of a new level of uselessness.

As a parent, you spend a lot of time trying to right-size your children’s fears and anxieties. No, there is no monster in the closet; yes, what that girl said was super-mean but it says more about her than it does about you; I know it may not seem like it right now, but you will indeed survive chemistry/high school/this breakup.

I was raised to be grateful that I lived in the age of antibiotics, a woman’s right to vote and public education. I was repeatedly reminded that life is a vale of tears but you keep moving forward anyway and offer up any suffering for the poor souls in purgatory.

With my kids, I de-emphasized the “vale of tears” and “poor souls” bits, but I have tried to teach them to focus on what they can control — themselves and their actions — rather than what they can’t: other people and theirs. Between us, my husband and I have seen enough history, general and personal, that we can usually provide some sort of historical context and proof of survival.

My kids are bursting to do things, big and small. To become fully enfranchised adults who, particularly in this time of righteous protest against systemic racism, can try to make a difference. What do I say to them when they rage and cry, when they fall into depression and anxiety, like the caged animals that they are.

This too shall pass?

But will it? I don’t even know. AIDS ravaged this country for decades before any sort of successful treatment emerged; there is still no vaccine for HIV. Compared with the kind of social distancing that COVID-19 requires, practicing safe sex seems like a cakewalk, but as history — of infection and unplanned pregnancies — has proved, many still do not practice it. Otherwise seemingly intelligent people refuse to get their children vaccinated, in a timely manner or at all, against diseases that previously killed millions. Some people feel they have a right, as U.S. citizens, to not wear a face mask in public, despite studies showing that compliance will bring down infection rates.

And I don’t even want to get into climate change, although when my kids wonder aloud if COVID-19 is simply the earth fighting back through population control, it’s tough to argue.

It’s challenging to parent teens and young adults in any era; COVID-19 makes it philosophically impossible. I have no parental wisdom to impart. We are in this together, we are learning the things we must do to survive together, we are seeing what is possible and what is not together.

My daughter decided not to return to her campus on her own because we left it up to her, and I am very proud of her decision, and of her ability to make it on her own. She knows just as much about what is happening now as we do; her decisions are just as likely as ours to be for the best.

Maybe more so. In his op-ed, Steinberg argued that young adults have poorer impulse control and a greater feeling of immortality than older people. That is certainly true. But older people are more prone to the self-assured belief that they understand how the world works, that life experience creates better instincts.

In the meantime, we are all just going to have to let our children and those around us cry and rage and sometimes despair. A lot of things suck right now. As parents, we can, and should, maintain as steady a “keep calm and carry on” demeanor as possible (and who knew the twee resurrection of that motto would become so vital?). But we can’t pretend that everything is fine or that we can somehow make it better.

With any luck, we can find a way to embrace the time we have as it is, find work and joy and growth within its confines rather than banging our heads against the walls of what it is not. But much has been lost, and acknowledging grief is part of the journey too.

These Black entrepreneurs stepped up to make sunscreen for darker skin

Thu Jul 16 , 2020
(Alana Hunter / For The Times) When Los Angeles resident Katonya Breaux was in her late 30s, she began noticing black moles on her face. It was an occurrence she assumed was genetic after witnessing the same spots on older women in her family. Breaux, the mother of singer Frank […] 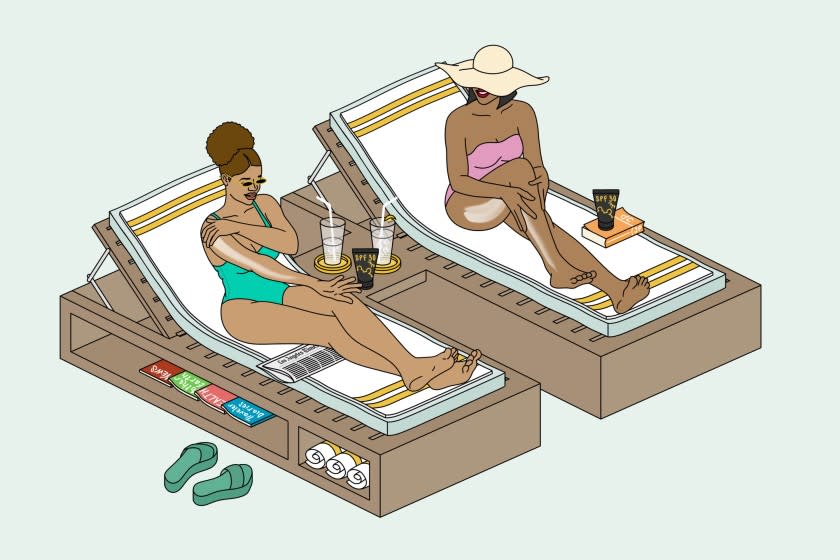