Over 20.6 million people across the globe have been diagnosed with COVID-19, the disease caused by the new respiratory virus, according to data compiled by the Center for Systems Science and Engineering at Johns Hopkins University. The actual numbers are believed to be much higher due to testing shortages, many unreported cases and suspicions that some national governments are hiding or downplaying the scope of their outbreaks.

Since the first cases were detected in China in December, the United States has become the worst-affected country, with more than 5.2 million diagnosed cases and at least 166,361 deaths.

Here’s how the news is developing. All times Eastern. Please refresh this page for updates.

With 148 new deaths reported in hard-hit Florida on Wednesday, the state’s death toll has now surpassed 9,000, the Florida Department of Health said Thursday.

Over 557,000 people in the state have been diagnosed with the coronavirus, according to the Florida Department of Health.

Florida has the second-highest number of cases in the U.S., behind California.

Many Catholic schools across the country are already up and running, and by the end of next week, about 70% of them will be reopened, Kathy Mears, the National Catholic Educational Association CEO and interim president, told ABC News on Thursday.

Most schools are offering some type of in-person instruction, she said.

“We are being very careful. We are following all local guidelines and the recommendations of many health care professionals,” Mears said. “We are making sure that the students are six feet apart in our schools, that they’re all facing one direction. Plexiglas has been put up.”

She said reopening decisions are being made at the local level.

“We pride ourselves on meeting individual needs and that requires different teachers at different times. So for high schools, many of them are using hybrid models,” Mears said.

She continued, “For the elementary, we can keep them better in one classroom because one teacher teaches all subjects and that teacher can differentiate. So at the elementary level, about 85% are going back in person full-time. About 15% of our students and their families are choosing to go online.”

“In April, we were envisioning that there would be a continued downward trajectory of COVID-19 new infections and deaths, that there would be a national surveillance system national testing, and national contact tracing that would allow us to really navigate this pandemic into re-socializing both in sport and then the rest of society,” he said during a media briefing hosted by the Infectious Diseases Society of America on the impact of COVID-19 on college athletics.

“That hasn’t happened, and it’s made it very challenging to make decisions as we approach fall sport,” Hainline said.

Dr. Carlos del Rio, a professor of medicine and global health at Emory University and a member of the NCAA’s COVID-19 advisory panel, recommended “that we hold off and we control this virus.”

“My advice to organizations that I’ve talked to is: if you cannot do it safely, you shouldn’t do it,” del Rio said at Thursday’s briefing.

The U.S. has “a quarter of the world’s total number of cases,” Del Rio stressed.

MORE: The way forward: How experts would clean up our COVID nightmare if they were in charge

“I feel like the Titanic, and we have hit the iceberg, and we’re trying to make decisions of what time we should have the band play,” del Rio went on. “I think a lot of the discussions of whether we should have sports, [or] we shouldn’t have sports, should really be focused on getting control of the pandemic.”

MORE: Why stopping COVID at schools may not be as easy as taking temperatures

The Big 12 announced Wednesday that it will move forward with fall sports this year and will give athletes in high-contact sports including football three COVID-19 tests per week.

The SEC is also moving forward. SEC Commissioner Greg Sankey said Tuesday, “We will continue to further refine our policies and protocols for a safe return to sports as we monitor developments around COVID-19.”

At Florida’s Baker Correctional Institution, 561 inmates and 25 staff tested positive for the coronavirus as of Wednesday, reported Jacksonville’s WJXT, citing the Florida Department of Corrections.

Another 294 inmate tests were pending.

One week ago, 20 inmates and 17 staff members had tested positive, WJXT reported.

MORE: 5 former CDC directors on where US went wrong in its COVID-19 response

All staff and inmates at Baker Correctional Institution were given face masks and everyone is required to wear one, a Department of Corrections spokesperson told WJXT.

Meals are now provided in cells and inmates’ temperatures are checked daily, the Department of Corrections told WJXT.

Authorities said the new cases are all in Auckland, the country’s most populous city, and are linked to the four people from the same family in Auckland who tested positive for the virus on Tuesday, breaking a 102-day streak without any locally-transmitted cases across New Zealand.

The fresh cluster of cases spreading within the community, which now totals 17, prompted New Zealand Prime Minister Jacinda Ardern to place Auckland under a three-day lockdown starting Wednesday and to reinstate some restrictions for the rest of the country.

“We are now treating these cases as a cluster — and what we know about clusters is that they grow,” New Zealand’s ministry of health said in a press release Thursday. “What is important is that we investigate these cases to their full extent, and that is exactly where people who are coming forward to be tested are helping us.”

Since the start of the coronavirus pandemic, New Zealand has reported 1,239 confirmed cases of COVID-19 with 22 deaths. Thirty-six of those cases remain active, including the 17 linked to the recent outbreak, according to the health ministry.

India registered 66,999 new cases of COVID-19 in the last 24 hours, its highest single-day spike in infections yet.

The country also recorded an additional 942 coronavirus-related fatalities, according to the Indian Ministry of Health and Family Welfare.

The nationwide total now stands at just under 2.4 million confirmed cases with at least 47,033 deaths. More than 653,000 of those cases remain active, after 1.6 million patients have recovered.

India has the third-highest number of diagnosed cases in the world, after the United States and Brazil.

A newborn baby is among the children recently hospitalized with COVID-19 in Minnesota, according to a report by Saint Paul ABC affiliate KSTP.

Jenni Gibbens said her son, Harrison, was just 25 days old when he tested positive for COVID-19 and was hospitalized in July, making him one of Minnesota’s youngest coronavirus patients.

“I was in absolute shock,” Gibbens told KSTP. “Any time when it’s your child, it’s just heartbreaking.”

Gibbens’ entire family ended up contracting the virus, with her husband being the first to show symptoms in early July. Her 4-year-old son Deacon, who also tested positive, was asymptomatic, she said.

“At 27 days old, he is officially taking the title of a COVID survivor, which seems unreal,” Gibbens told KSTP.

To date, more than 9,000 Minnesota residents under the age of 20 have tested positive for COVID019, including more than 1,400 children younger than 6, according to KSTP.

Patsy Stinchfield, a pediatric nurse practitioner and the senior director of infection prevention and control at Children’s Minnesota, said 72 children have been admitted to the hospital with COVID-19, with around 10 needing to be put on ventilators.

“Most of the kids that are coming in are in for support, IV fluids, observation, just making sure they’re not going to get worse,” she told KSTP. “We are seeing a very wide variety of symptoms.”

Italy has ruled that people traveling to the country from Croatia, Greece, Malta and Spain must be tested for COVID-19 on arrival.

Italian Health Minister Roberto Speranza announced Wednesday evening that he had signed the new order, adding that anyone traveling from or through Colombia would be barred from entering Italy.

“We must continue along the line of prudence to defend the results achieved in recent months with everyone’s sacrifice,” Speranza wrote in a Facebook post.

Italy, once the epicenter of the coronavirus pandemic in Europe, has so far reported more than 251,000 diagnosed cases of COVID-19 with over 35,000 deaths. The country has largely contained the spread of the virus in recent months, but now there are fears of a possible resurgence of infections. Italy registered another rise in the number of new infections Wednesday, with 481 cases identified in the past 24 hours — up from 412 on Tuesday, according to data released by the Civil Protection Agency.

There were 55,910 new cases of COVID-19 identified in the United States on Wednesday, according to a count kept by Johns Hopkins University.

An additional 1,504 coronavirus-related deaths were also reported — a jump of more than 400 from the previous day.

It’s the first time in four days that the nation has recorded over 50,000 new cases. But Wednesday’s caseload is still well below the record set on July 16, when more than 77,000 new cases were identified in a 24-hour reporting period.

A total of 5,197,377 people in the U.S. have been diagnosed with COVID-19 since the pandemic began, and at least 166,027 of them have died, according to Johns Hopkins. The cases include people from all 50 U.S. states, Washington, D.C. and other U.S. territories as well as repatriated citizens.

By May 20, all U.S. states had begun lifting stay-at-home orders and other restrictions put in place to curb the spread of the novel coronavirus. The day-to-day increase in the country’s cases then hovered around 20,000 for a couple of weeks before shooting back up and crossing 70,000 for the first time in mid-July.

Many states have seen a rise in infections in recent weeks, with some — including Arizona, California and Florida — reporting daily records. However, the nationwide number of new cases and deaths in the last week have both decreased in week-over-week comparisons, according to an internal memo from the Federal Emergency Management Agency obtained by ABC News Wednesday night.

Land a New Job With an Ageless Resume

Thu Aug 13 , 2020
Working as a real estate broker wasn’t giving Cort Howard the steady income he wanted or enough time with his family, so last October he began looking for a new job. In addition to networking, Howard, 54, hired Joe Konop, owner of One Great Resume, to help him craft a […] 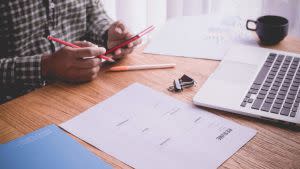