Older people who go online daily are happier when they use the internet to stay in touch with friends and family, a major new study has found.

Research by University College London (UCL), which studied the internet habits of 9,000 over 50s over four years, found that participants had better mental health when they used the internet for communication, but felt worse when they used it for information purposes, such as job hunting.

Researchers said the results showed internet access could be used to reduce loneliness and urged the Government to make it easier for older people not yet online to access the web.

For instance, a 2018 study from the University of Pennsylvania found teenagers who cut the time they spent on Facebook, Instagram and Snapchat to just 10 minutes a day experienced “significant declines” in symptoms associated with depression.

The UCL study, which has been published on Tuesday in the Journal of Medical Internet Research, asked people to measure their life satisfaction on a scale from five (lowest) to 35 (highest).

Researchers then found that respondents using the internet daily reported an average satisfaction of 26.12, compared with 24.44 or those who used it less often.

Dr Stephen Jivraj, the lead researcher on the study, told The Telegraph: “The analysis we have done seems to suggest that using the internet for communicating with other people does provide some substitute for face-to-face communication, and does have a positive impact on mental health.

“I think if you can’t communicate with people in person, for example, because of the pandemic, then communicating with people online is – if perhaps not a perfect alternative – an adequate alternative in terms of tackling loneliness.”

The report recommended that the Government work to make the internet more accessible for older people to help prevent them becoming isolated.

Among the measures suggested are making WiFi and internet connected devices available in public spaces such as libraries.

The researchers also warned websites and web-enabled devices were not always designed to be easily accessible for those older people who have little experience of the internet.

The paper urged ministers to encourage tech companies to make simpler versions of websites and apps that would make it easier for older people to join, and also for devices to have settings that magnified text and images for people with impaired vision.

Tue Jul 28 , 2020
Rajah Caruth liked the animated autos of ”Cars” as a kid, got hooked on the race scene after a trip to the track and sharpened his driving skills as a teen via online racing. Caruth might one day earn his shot at inspiring the next generation of drivers. The 18-year-old […] 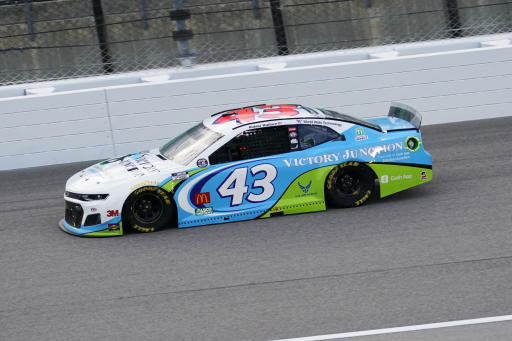