At one point or another, most of us in lockdown will have tried out a new recipe – and failed. Perhaps you couldn’t bring your sourdough starter to life, or maybe your hand-cut noodles were too thick, too chewy or too much of a sloppy mess. At the time, you probably weren’t thinking about what was happening on a molecular level. But for cancer research scientist-turned-cook Pippa Middlehurst, “it’s the way my brain understands the world”.

Two years ago, Middlehurst swapped her lab coat for an apron to pursue her love of Asian cooking – and even appeared on and won the first series of Britain’s Best Home Cook on BBC One – but the decision was less a choice of one over the other, and more a merging of two passions. “It sounds silly that there would be so much science involved with noodles,” she tells me over the phone. “Science is comforting for me in some way and I think it has really helped me in cooking because if I could understand what’s happening from a scientific perspective inside the food, if something goes wrong I can change it.”

That’s exactly what she aims to educate novice cooks about in her new book Dumplings and Noodles, out 20 August, with a whole section dedicated to “Noodle Science”. It explains everything from bond formation vs bond degradation to what riboflavin (vitamin B2) and kansui (Chinese alkaline solution) are and how to use them. That’s not to say there isn’t something for everyone, though. While many of Pippa’s 46,600 Instagram followers will be coming to it from the science angle, “some people want to know how to navigate pantries, for example. I know that not everyone is going to want to jump in and start stretching noodles and that might feel like a recipe for when they’ve had a bit more practice.”

Middlehurst admits she wrote the book with her past self very much in mind. “One of the things I struggled with the most when I started out was just being completely overwhelmed by Asian ingredients,” she says. “If you go to an Asian supermarket, there are seven to 10 different types of soy sauce, and Chinese soy sauces are different to Japanese soy sauces and then knowing which brand to use and what’s the difference between light and dark soy sauce… it’s just totally overwhelming and it’s one of the questions that I get asked the most.

“I was kind of writing it for me but 10 years ago, because this is the sort of information that I wish had been compressed and made accessible. I hope that’s what it can give to somebody who’s just started out.” Pantry lovers will certainly enjoy that section of the book, with lists of essential ingredients and which brands are best, information about what you can freeze and for how long, and the kitchen items worth investing in. There’s even a meal planner indicating which recipes are suitable for Friday nights in or dinner parties, and others for when you have a bit more time: the book really truly is suitable for both those looking for a quick fix and those after a deeper dive into the cuisine.

Middlehurst’s love for Asian cooking started in childhood. Her first interaction with it was when her well-travelled grandfather would take her and her brothers for authentic dim sum. She has fond memories of the “steaming dim sum trolleys”, “bamboo baskets” and “new and unfamiliar flavours and textures”, an experience that was far removed from the typical Asian food available in Britain at the time. “Meat and two veg never really did it for me,” she adds, and this combination of factors inspired her to seek out her own recipes to try.

But she struggled to recreate the authenticity she had experienced in the dim sum restaurant with her grandfather. “[The recipes] would always be slightly westernised and they’d never taste like what I remembered,” she says. “It was always too sweet or just not the same.”

She turned to Asian chefs Ken Hom, Ching He Huang and Fuchsia Dunlop for inspiration. “That’s where I learned most of the early knowledge I had, that’s how I found different recipes, that this is called this and that is called that,” she explains. “But I still found it difficult to know which brand of sauce to buy or why am I using that or where do I get that, what aisle is it in in the supermarket, where does it come from in the world, what its flavour profile is, can I use it in these dishes or is just for this one dish?” She wanted to go deeper, so she started searching for blogs written by Asian people for Asian people. “I’m really good now at deciphering Mandarin recipes that have been translated on Google,” she jokes.

Like most food personalities, and indeed most of us in lockdown, Middlehurst started posting pictures of her creations on social media (“But nothing like a food blog, just sporadically in between all the rest of the junk you put on Facebook or Instagram”), much to the amusement of her then-partner and his friends. “They’d say, ‘oh no one wants to see your tea’ … And so I stopped doing it and I was genuinely convinced that no one was interested in what I was cooking and nobody wanted to see it and that it was annoying.”

That self-doubt and imposter syndrome is something she still struggles with today, she tells me. “It’s taken me such a long time to go with what I think, like if I think something is a good idea not to automatically turn around and dismiss it.” She says all that changed when she gave birth, though, adding: “I think going through something like that you kind of realise what you’re capable of and you’re not afraid of failing.”

It wasn’t until she met her partner now, Christian, that the Pippy Eats brand as it’s known today really materialised, after he set her up a website and Instagram account. “One day I just thought, ‘what’s the harm?’ So I just started uploading pictures, because he’d done all the hard work for me. That was three and a half years ago.” A scroll through her feed today is a mouth-watering experience, from gloriously juicy ramens and stir fries to delicately folded dumplings and gyozas to shots of Pippa hand-pulling noodles as long as she is tall. “I guess the rest is history!”

Well, “the rest” was actually a string of successful supper clubs (“Back then, a supper club was this really underground thing, especially in Manchester… they had a bit of an air of mystery”), which kicked off after the owners of Pollen Bakery invited Pippa to host a supper club as a Kickstarter reward in their new premises. “After that I was getting asked more and more frequently, so I started doing them here and there,” Pippa tells me. “I’d do my workshops, and then the TV show aired and that gave me a lot of exposure.” Pippy Eats was born, and saw the aspiring chef lugging her equipment to small, independent venues all over the city, such as Pollen, Idle Hands and Form, to trial her Insta-worthy noodle and dumpling recipes, or teach others how to make them.

Even lockdown saw a boom in business, of sorts. When coronavirus struck in the middle of her maternity leave, and without a guaranteed income from selling tickets for her events, Middlehurst got creative. “I’d make jars of chilli oil for my mum and my family and they’d rave about it, but I thought they were just being nice,” she explains. “So I made a batch in a five-litre pan that I had in the kitchen and sent it to friends and gradually I got a bigger pan, and a bigger pan, and a bigger pan, and now I have a 50-litre one.” She started selling three flavours of her chilli oil online, which would take around two weeks to make, jar and label, to huge success: the entire batch would sell out within minutes of launch, often to the disappointment of some of her more avid fans. “You wouldn’t believe the abuse that I get … the people that were missing out were getting really irate,” she says. “It’s stressful when they sell out and I get this crazy level of anxiety every time it happens.” But, she adds: “It feels like I’ve got this level of security knowing that people want the product, so I can keep paying my bills!” Those who did miss out will be pleased to hear that Middlehurst is currently trying to outsource the whole operation, so maybe they’ll have better luck next time…

With Pippy Eats well and truly booming, it seems only natural, then, that she is now opening Noodlehaus, a dedicated space for events like supper clubs and cookery workshops, not just for Pippy Eats but other independent food businesses in Manchester too. “The idea for Noodlehaus came to me before lockdown when I was on maternity leave,” Pippa explains. “I’ve got a lot of friends who work in independent food businesses, with street food carts or small cafes or whatever, and they’d all started to show interest in doing workshops … they were asking me where do you do them, does this place have a kitchen, asking me about facilities, and then they’d ask if they could borrow my equipment.” Pippa knew the start-up costs of workshops – buying 12 or so of everything from bowls to pasta makers – can be steep, and wouldn’t be possible for every small business. She started keeping a list of who was borrowing what, when it dawned on her: “I just thought we need a space that has the equipment, that has everything that everybody needs, and they can just come to the space. It can be like a little hub.”

After a successful Kickstarter campaign, in which more than £43,000 was raised, Pippa is working hard to get the space ready to open mid-September. “Because the space is in an old mill, we’re going to have to do things in a bit of a special way. We can’t just go and fit an Ikea kitchen,” she says. “There’s no running water so I’m going to have to figure out a way to get that to the space. It needs heating… because it’s an old mill, it’s not energy efficient.

“So I’ve got a lot of stuff to do to get it ready, but once it’s ready I’m so excited.” Pippa also plans to make the space completely multi-functional so it can be hired out by other creatives, whether that’s for yoga, life drawing, embroidery workshops or parties. She says she’s got plenty of recipes for a second book, too. So there’s certainly lots to be excited about.

While some of her followers might be disheartened to learn she has no intention of opening a restaurant, something tells me it’s better that way. Middlehurst’s passion for her craft and her desire to help others starting out on the same path are what make Pippy Eats what it is today, and will be what keeps her fans coming back for more supper clubs and workshops, more delicious noodle and dumpling recipes and more chilli oil (if they’re quick enough, that is).

‘Dumplings and Noodles: Bao, Gyoza, Biang Biang, Ramen and Everything in Between’ by Pippa Middlehurst is published on 20 August by Quadrille, £16.99

Wed Aug 19 , 2020
But “Tucker Carlson Tonight” has never been more difficult to monetize for the news network amid today’s polarized political environment. Advertisers face heavy pressure to stay away from his show for what his critics say is a tendency to fan racist rhetoric. Carlson says he has the backing of Fox […] 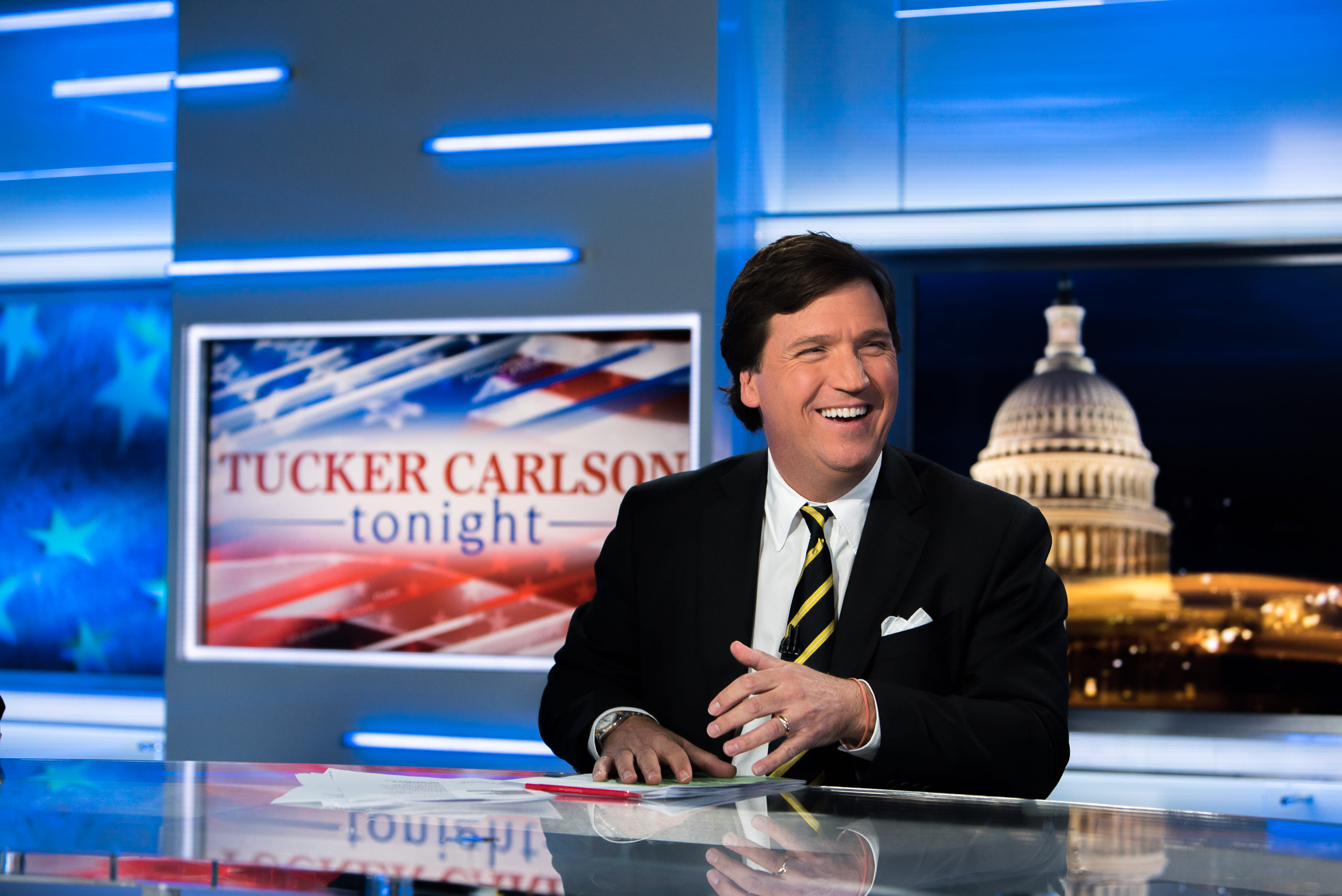