Senate Republicans on Monday unveiled their long-awaited proposal for another coronavirus economic stimulus package, including big changes to the enhanced unemployment benefits that are set to expire this week for millions of Americans.

Based on Republicans’ previous descriptions of their plan, a trade association for state unemployment agencies said last week it would be an implementation nightmare with wildly different results among states.

The $1 trillion measure is supposed to be a starting point for negotiations with top congressional Democrats. But already it has divided the GOP and faces stiff opposition from conservatives. It includes another round of stimulus checks, similar to those paid out earlier this year, as well as aid to schools and smaller businesses, and expanded liability protections.

The Republican proposal would reduce the extra federal unemployment benefits that Congress created in March from $600 to $200 until October, then switch to a new payment formula.

Despite the steep reduction, Senate Majority Leader Mitch McConnell (R-Ky.) boasted that the dollar amount “is eight times what Democrats put in place when they controlled the White House and Congress during the Great Recession.” In 2009, Congress added $25 to weekly unemployment benefits.

Democrats want the extra $600 to remain for the rest of the year.

Under the Republican plan, starting in October states would have to replace the $200 with an individualized amount based on workers’ previous wages, capped at $500, so that a claimant’s combined state-federal benefit doesn’t exceed 70% of what they made from work. The extra benefits would remain until July 2021.

But there could be a huge problem with the proposal to set the extra benefits according to individual wages, even if it’s delayed until October. The National Association of State Workforce Agencies said it could take as long as 20 weeks for some states to implement.

“If such a policy solution is chosen, the effective date should be set well in the future, with a continuation of a flat amount until that future effective date,” the trade association said in a July 23 document offering guidance to lawmakers. (Even changing the amount to $200 could take as long as five weeks in some states, according to the association.)

It’s no surprise that state unemployment agencies would struggle with a new policy. After all, it took weeks and in some cases months for states to implement the changes Congress enacted in March. Several unemployed workers have told HuffPost they still can’t get anyone on the phone when they have a problem with their claim.

“State unemployment offices are operating with ancient technology and struggling to get benefits out the door as is,” Sen. Ron Wyden (D-Ore.) said Monday. “Any effort to make the system more complex is sabotage. It will result in workers losing their benefits and more workers falling through the cracks.”

Meanwhile, more than 25 million Americans receiving benefits got their final payments with the extra $600 over the weekend. Next week, they will receive only the state portion of their benefits, which typically amounts to less than $400. That income loss could have a substantial effect on the broader economy.

Kevin Menard of Gladstone, Michigan, said he and his spouse are “breaking even” thanks to the extra $600. He receives less than he did from his job as a corporate travel agent, but enough to pay his bills. Without the extra money, he will have to prioritize his mortgage and figure out which obligations have to slide.

“Somebody’s not going to get paid. I’ve always been on time with everything.” Menard, 52, said in an interview. “I’m seriously going to have those conversations and I’ve never been in this situation my entire life. I’ve never not had a job since high school.”

Republicans have complained the extra $600 discourages people from taking jobs, even though the pandemic is surging and public health experts say staying home is still the country’s best medicine. Menard said that he wouldn’t feel safe trying to strike up a new career and that he’s still technically employed at his old job, on furlough until October.

House Democrats passed their own $3 trillion measure in May. Among its relief provisions, the bill would fully extend the added unemployment benefits until the end of this year. Republicans, however, decided on a wait-and-see approach to further coronavirus aid, declining to act until just a few weeks before the July 31 deadline.

“The simple, easiest thing to do is extend it,” Senate Minority Leader Chuck Schumer (D-N.Y.) said Monday on MSNBC’s “Morning Joe.” “It’s been one of the most successful programs at keeping people out of poverty, getting money into the economy quickly. Had we not done it, we’d probably be in a depression. If we don’t do it again we could go into a depression, as bad as this recession is.”

Democrats will have leverage over the final product, and their support is necessary to send the legislation to the president’s desk. Half the Senate Republican conference is currently opposed to passing any additional stimulus, Sen. Lindsey Graham (R-S.C.) said Sunday on Fox News.

“It’s just shoveling money to her friends and not actually solving the problem,” Sen. Ted Cruz (R-Texas) said of House Speaker Nancy Pelosi in a separate Sunday interview on CBS.

White House officials on Sunday floated an alternative proposal before the broader package had even been unveiled, something that doesn’t bode well for this week’s expected round of negotiations. The more narrow package would include only a partial extension of the enhanced unemployment benefits, along with some funding for schools, and expanded liability protections for businesses.

But Pelosi has repeatedly rejected that approach, criticizing Republicans for not proposing enough aid to vulnerable Americans, such as additional food assistance.

“It’s good they called it skinny,” Pelosi told reporters on Monday in reference to the narrower GOP proposal, “because that’s what you get when you don’t have any food to eat.”

How Low Can Dems Go On Unemployment Benefits?

Larry Kudlow Says Next Coronavirus Stimulus Draft Will Include A Second $1,200 Check

Tue Jul 28 , 2020
LOS ANGELES, CA — The top health officials in Los Angeles County conceded to a slew of miscalculations in the early stages of the pandemic Monday, but it’s those hard lessons that are guiding the community out of the latest outbreak. Early on, experts erred in downplaying the spread of […] 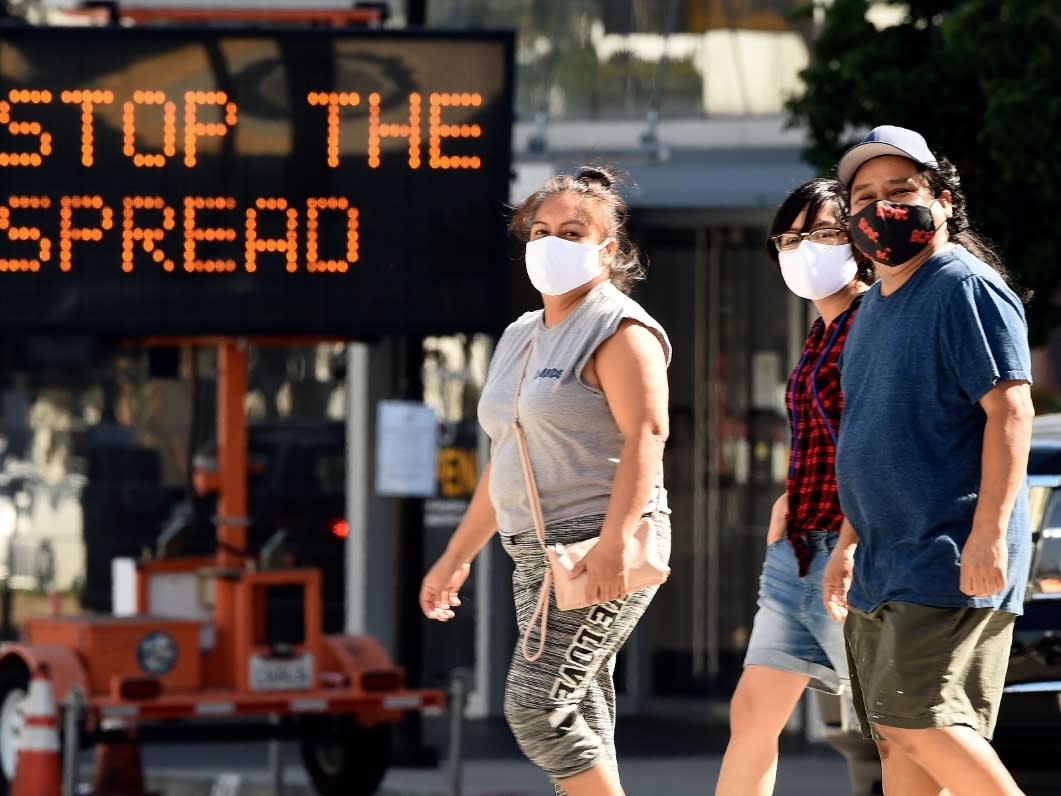