What if you were an international star who’d had a supporting role in two of the biggest franchises of all time, then you went on to deliver the best performance of your career in a tough, tiny British drama, and hardly anybody noticed? Chances are, Orlando Bloom has been asking himself some version of that question for the last three years.

That’s how long it’s been since he played Malky, a lapsed Catholic tormented by childhood sexual abuse, in “Retaliation,” a remarkably nuanced alternative to the grudge-bearing revenge genre from a pair of first-time feature directors, siblings Ludwig and Paul Shammasian. “Retaliation” was virtually overlooked when it premiered at the Edinburgh Film Festival back in 2017, landing distribution in a few foreign countries (presumably on the basis of Bloom’s involvement), only to surface now as one of the many pandemic releases so micro, they may as well not exist.

Malky’s a mama’s boy with serious intimacy issues and a vicious temper, triggered by the return of the man who molested him a quarter-century earlier. Such roles typically fall to character actors, not a matinee idol like Bloom, whose bankability depends on never straying too far from the virile romantic fantasy-lovers that make teenage fans weak in the knees. One can easily imagine Bloom’s agent freaking out over the insinuations of impotence and confused sexual identity “Retaliation” poses. As if to further undermine his masculinity, Malky’s mum (Anne Reid) blithely reminds him, “You was always mistaken for a little girl,” in their first scene together.

It takes a real man to portray someone who swaggers into the local bar like he owns the place, wearing his prison time as proudly as his tough-guy tattoos, but wilts when his mother treats him like a child. By accepting the part, Bloom also accepts that screen-caps of a certain scene — when Malky strips down and lubes up a wooden rod to administer a cruel form of self-flagellation — will be seen online by more people than ever pay to watch the movie. And yet he embraces the risk, recognizing that this portrait is about more than pedophilic priests (that subject actually feels slightly overplayed, post-“Spotlight”); it’s a sobering inquiry into the ramifications of abuse, not just on the victim but insofar as they impact every relationship that follows.

Expanded from a short film called “Romans 12:20” (in which character actor Craig Conway played the Malky part), “Retaliation” is neither what we think of as “faith-based” movie nor a condemnation of those who put their faith in such a fallible institution. The movie opens in an old church, which Malky and best bloke Jo (Alex Ferns) have been hired to demolish. As metaphors go, the task is a bit literal, and yet, the symbol assumes a poetic dimension as handled: Malky channels his aggression into knocking down buildings, and yet, in this place of worship — the very site of his trauma — he maintains respect, dismantling the crucifix with care.

He’s tougher on his girlfriend, Emma (Janet Montgomery), whom Malky keeps at arm’s length. Trust isn’t his strong suit, and who can blame him, given what happened when he was 12? As audiences, we want to see him get better, and the conventional wisdom of cinema — and certainly any film called “Retaliation” — is that revenge will do the trick. But if the burden of guilt is his problem, how could murder possibly solve it? If screenwriter Geoff Thompson wanted to convert us, forgiveness might be in order. But he has something slyer up his sleeve, related to that Bible verse (“Romans” was the film’s working title), and he’s smart enough to put Malky’s psychology ahead of any form of proselytizing, whether for or against organized religion.

“Retaliation” feels a little overwritten at times, and Ferns (as Malky’s closest friend) has a couple monologues that are barely intelligible through his thick accent, but the movie’s arch, almost theatrical approach — inspired by brilliant British director John Michael McDonagh’s similar-themed “Calvary” perhaps — succeeds because Thompson tends not to confront his themes head-on. As such, audiences do the work of analyzing his behavior, as the Shammasian brothers allow much of Malky’s turmoil to register in Bloom’s body language and actions. He’s a clenched fist of rage at times, clutching his demolition hammer like a deadly weapon.

Resentment, it has been said, is like letting whoever hurt you live rent-free in your head, and by clinging to the pain, Malky is only hurting himself more. When another priest (Charlie Creed-Miles) attempts to offer counsel, Malky picks a fight instead, nearly provoking this man of God to murder him on the altar. The film’s style isn’t as austere as Paul Schrader’s recent “First Reformed,” but the underlying sense of penitent self-punishment hails from his playbook.

At one point, Malky confesses, “When the lights are off, and I’m in alone in the dark, I don’t trust my own hands.” Nor should he, as Bloom demonstrates in a brutal impulse that rivals Robert De Niro’s “Are you talkin’ to me?” bit for sheer actorly intensity — except Malky’s so damaged, he can barely look himself in the mirror.

Like “Taxi Driver,” “Retaliation” opens a window into that dark corner of the male psyche so few films confront. Watch how Bloom plays this scissors scene, treating it as a perverse kind of martyrdom — and that’s nothing compared to the film’s final act, which unfolds at a distance, out of focus, reflected in the eyes of another child as the cycle corrupts the next generation. Whether you’re skeptical of Bloom’s abilities or have long been a believer, you can’t help but respect what the actor does with “Retaliation.” And the same might be true whether you’re religious or not, seeing as how the film promises revenge, while leveraging cinema’s most powerful weapon: empathy.

Fri Jul 24 , 2020
SHANGHAI (Reuters) – Coal should play no part in any country’s post-coronavirus stimulus plan and economic recovery should align with global climate goals, U.N. Secretary General Antonio Guterres said in a lecture to Chinese students. “There is no such thing as clean coal, and coal should have no place in […] 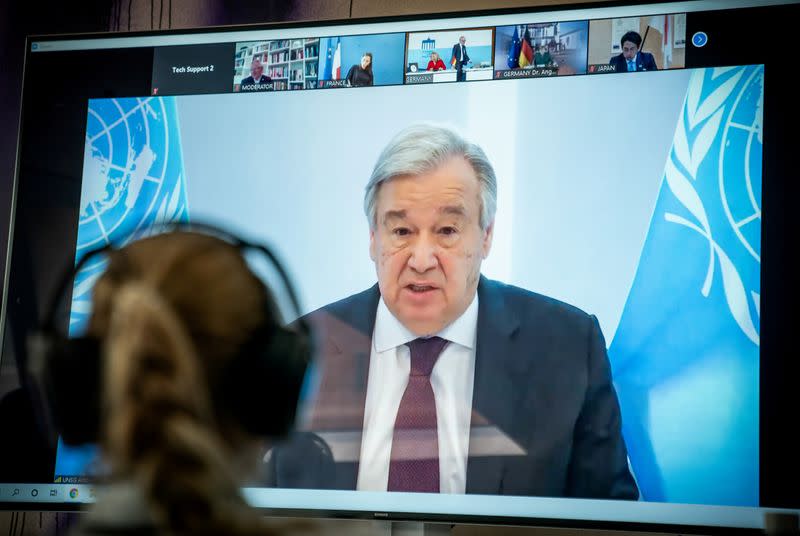